Thursday, Dec 22, 2005 by Reid "Frolixo" Paskiewicz
Know of an awful site? Send it to us and become a hero!

Rick and Sidney, submitted by snickerdoodle. There are a lot of ALOD's that make me sick, angry, confused, and/or depressed, but once and a while you stumble across a site that makes you laugh in a heartfelt and genuine way. I would lump "Rick & Sidney" in that category. I hope this site does the same for you that it did for me. I once was blind, but Rick and Sidney have given me the eyes to see the truth behind the scientist's lies. 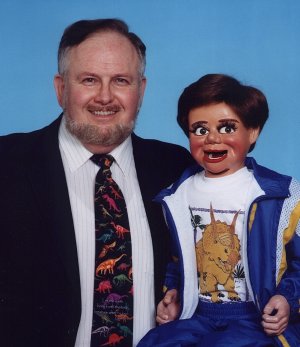 "Rick and Sidney have a unique presentation that is both fun and memorable. Sidney sings and provides the humor while Rick tries to get a word in. One of Rick and Sidney's most popular programs is the one where Rick is thwarted in his attempts to prove that Sidney is a dummy. Sidney is able, without Rick's lips moving, to say everything that a dummy isn't supposed to be able to say. An outstanding feature is Sidney's ability to say every letter of the alphabet and his clear diction even when speaking very fast. Sidney's singing is also very popular."

"A lifetime interest of Rick’s has been the scientific evidence for special creation. After hearing a lecture by Dr. Donald Chittick he decided that he wanted to be able to use his ventriloquism to communicate the facts supporting creation. Rick and Sidney's program on creation examines the difference between evolution and creation and shows the scientific support for creation in an entertaining and memorable way."

It's so goddamn beautiful. I'm crying over here folks.