You Screwed Up, submitted by total lack of shame. These are the words that appear on the very first page of You Screwed Up:

Those of you with nothing better to do than publicly ridicule the pet projects of those confident enough to be mildly creative, fuck off.

Here is what is being defended. 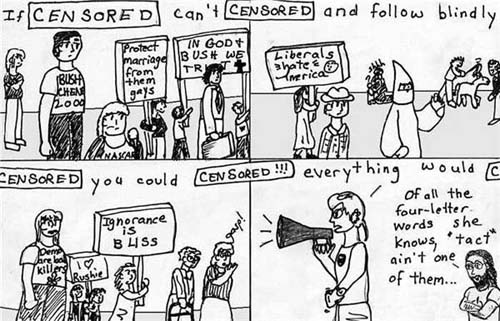 Obviously, the artist was expecting some backlash from the stances in the comic that were apparently gained by walking past a political science class one day, so I can't possibly be upset about the disclaimer. Before I continue, let's keep in mind that I have nothing better to do than criticize the pet projects of those confident enough to be mildly creative, so at this point I will refuse to "fuck off" and instead tread lightly on the delicate bones of criticism. My main problem with You Screwed Up is that I find it pretty uneccessary, because if I wanted to see one-sided, preachy and ignorant political commentary, I would save myself the trouble of reading and just watch an episode of The Boondocks. At least then I would be soothed by the bright colors and lack of lip-synch that make me feel like I am watching a real Japanimation Animation! All that's missing are the wallscrolls!

I may be selling You Screwed Up on its political commentary, but it's more than just that. Artist Jack Kusluch brings a special brand of ignorance and a complete lack of basic rendering skills to topics such as anime conventions, furries, and cosplay! It's like the complete college experience for deviants as drawn by an eight year-old! At last, a way for regular people to know what higher education is like without having to watch Saved By the Bell: The College Years.

You Screwed Up may sell itself as being "mildly creative," and I agree that it is. It's mildly creative in the same sense as a sandwich artist at Subway would be "mildly creative" by defecating in your tuna and swiss sub right in front of you, while you think, "Wow, I never would have thought of doing that!" Some people should not be creative, but no matter how many times they hear "Stop!" "Please stop!" and "The police have you surrounded!" they refuse to quit. While no one has attempted to stop me as of today, I try to balance things out by being a spiteful, petty monster who can only tear down the work of others. Enjoy!