Movin' on Up, to the Hellhole Side

As I might have recently mentioned (NOTE: I have never mentioned it), I accepted a job opportunity with Shock Fusion, a company in downtown Seattle. They were looking for a person like me to do various webmastering and Flash things for them, and fortunately for me, I happen to be a person like me. As a result, I've been preparing to move all day today, in what I refer to as "Stage 1 Packing." This is the more confusing step of moving, when you look around your apartment in disgust and it finally dawns upon you that your place is just festering with utter crap. Suddenly, all the closets you never opened since moving in and all the boxes marked with cryptic messages such as "COLLEGE(?) OCTOBER 119" begin to loom above you, filling the room with a very foreboding and tension-filled atmosphere. Before I entered Stage 1 Packing, I figured there was hardly anything that had to be moved. I mean, there's that futon (correct spelling of the word "futon" provided by deborah) which my cat vomited on back around the late 90's, and I've got that TV set which never gets any channel except the one that features "America's Wackiest Surgery Mishaps," but what else is there? I assumed this would all be a piece of cake and it would only take around 10 minutes to shove everything into a giant UAC crate marked "SEATTLE OR BUST." However, Stage 1 Packing soon descended upon me like a fat woman jumping from a transport helicopter, and all the junk in my closets began to smolder before my eyes, like... uh... like something smoldering before my eyes.

After building up enough courage and equipping myself with a catcher's outfit that I got for sending in 40,000 Coco Puffs proof of purchases, I made my way into the dank and darkened chamber that is my guest closet. When I moved into my apartment two years ago, I came loaded down with a large assortment of moving boxes from college, each one containing a varied collection of completely random and useless objects which were packed simply because I was too embarrassed to throw most of the crap away. Many of these boxes had not been opened since I took them with me from home to college, but this didn't stop me from continuing their exciting cross-continental journey ala "Milo and Otis." All these boxes ended up in the guest closet, as that was the location which ran the lowest risk of actually encountering and opening them, which would probably be fatal. However, now that I was preparing myself for yet another move, I attempted to minimize my baggage and hopefully reduce moving costs to somewhere under the $150,000,000 range... and this entailed me going through Stage 1 Packing. 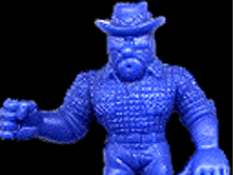 "YEE HAW! Why the fuck am I in your closet? I need to break free and win the M.U.S.C.L.E. championship! And then I'll lynch some darkies!"

Approximately nine million feet of coaxial cable. This really boggles my mind because my television is only two feet away from the cable outlet, just like it was in my previous apartment. As far as I can tell, I must've placed two coaxial cable in a box, where they proceeded to marry and produce baby coaxial cables, eat them, and grow to unimaginable lengths. I should probably start my own cable company with all the wire I have. If you're an attractive woman who enjoys licking chocolate off another attractive woman and you'd like to be on my cable network, please email me your headshots and any moneyshots you might have offhand.

Enough VCR tapes to fill the Grand Canyon. Judging by all the tapes stored in my closet, the only thing I did during college was tape things. Since I can't really remember anything that happened during those four years at Vanderbilt University, I'll assume this to be true. However, there's no easy way to tell what the hell is on all these tapes. Each one is labeled with things like "SIMPSONS VOLUME 8367," but those titles are all crossed out and written over with what seems to be random Egyptian symbols describing how to operate a flush toilet. To top it off, the cassettes are recorded in ultra super mega SLP mode, which means there's like 5,000 hours of programs per tape, each with the recording quality of a 1968 copying machine. I have decided that all these tapes are going straight to the dumpster, as there's probably a reason I haven't watched them in three years.

M.U.S.C.L.E Men. For some inexplicable reason, I've got three bags full of M.U.S.C.L.E. Men. Why? I have no fucking clue. But hey, there they are. I've got the purple guy that looks like a camera, the pink kid with a huge head, and the red guy with knives for eyes (among others). It's particularly mystifying to know that 1980's toys were somehow able to transport themselves into a box in my closet, but hey, stranger things have happened. On second thought, no, they really haven't.

Millions of PC game instruction manuals. As a general rule, I never throw out any PC game related material because there's a 99% chance they contain some obscure keycode needed to play it or unlock it or email the development team with death threats. In addition, I have a memory which has a difficult time remembering my own home address, much less the "USE ALTERNATE INVENTORY ITEM UP" key. This explains why I still have the DWANGO registration card from Doom and why under "ADDITIONAL NOTES" I wrote "655 Baker Street, Costa Mesa, CA."

Hundreds of RCA connection cords. I've got male-to-male extension cables, male couplers, female to male Y-adaptors, and a whole bunch of other homosexually-oriented connections. This makes little to no sense considering that the only outputs on my VCR are the coaxial cable and the dent in the side from when I smashed a Chunky Noodle Soup can against it. But hey, if the aliens come and threaten to zap us all with their ray guns, I'll be well prepared. Why? I don't know. These cables sure as fuck won't help me any. I'm sorry I even brought it up to begin with. This is what Stage 1 Packing will do to you.

CD Cases. Once I get a new CD, I put it into a carrying case with all my other CDs, in a vain hope that they'll mate and create weird music offspring combinations of Maynard Ferguson and the Swamp Terrorists. However, I've still kept all the cases of every CD purchase. Why? I don't know. Maybe I was thinking that one day I'd put the CD back in the case and sell it back to the store at a ridiculously inflated price. Or perhaps in the post-apocalyptic future, the currency will be based off CD cases instead of money or water. Or maybe I'm just stupid. House odds are on the latter.

...and that's just like half of the crap in there. Needless to say, I loaded up all this refuse and tossed it straight into the dumpster behind my apartment, where it took some Mexican guy only 26 minutes to jump into the trash and start rooting through it (I kid you not). I think the dumpster is bugged and sends messages back to the guy's Love Shack every time anything with more metal than your average Kit-Kat bar is placed into it. I was walking to my car when I saw a set of eyes and a handlebar mustache rise from the dumpster (along with a face behind them), and the Mexican guy just kept rifling through my shameful ex-belongings. More power to him; if he can find some use for the Stage 1 Packing victims, then he deserves every bit of credit. However, in the back of my heart, I know that all those items will soon end up in the back of his El Camino, edging out his great grandma and the other 253 members of his family who are all waiting for the beacon to alert them of another Stage 1 Packing deposit.