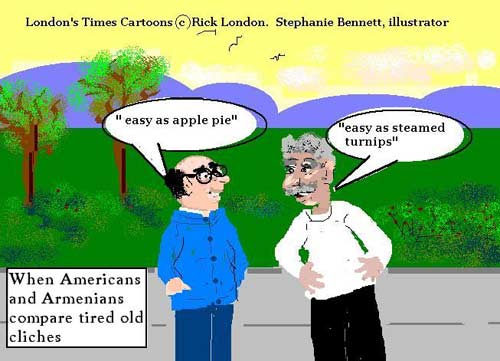 London's Times, submitted by Squonk. A terrible site that loads something like 150 images on the opening page and it's full of terrible commics. Really, really, really terrible comics. The worst are the ones in which site owner London collaborates with artist - I use the term far more loosely than English would normally allow - Stephanie Bennett. Stephanie is a cartoonist who is apparently eight years old and possibly retarded.

Londons Times has appeared in newspapers such as USM's Wag, The Hot Springs Sentinel, and international farming publication "The Grass Farmer".

Ha ha! It's like one of those terrible white people/black people jokes, only they forgot to even include the joke. This is even one of Stephanie's best illustrations.

Oh man, I just noticed that London is a founding member of Cartoonists Against Terrorism, which was given the prestigious "Hot Site" award by the Texas Local 1259 fire fighters union. It's like winning an acting award from a grave digger's organization.