If You Pick Up On The Subtext, The Rocky Movies Are About Punching

A viewing of the Rocky films will keep you entertained with depictions of larger than life characters vacillating between every social class in America. At one point there's even a robot butler. If you watch closely, though, you'll soon come to realize that far below the surface a deeper meaning is being put forth by the creators: Punching.

Consider the first Rocky. When Rocky visits a meat freezer and hits a large cow meat with his fists, it's symbolism for punching. Yes, the overt message is that Rocky is a working class schlub training for the fight of his life, that his opponent can not be considered human, and that Rocky's relationship with the gruff Paulie is developing into an uneasy friendship. You have to read between the lines, though, to realize that there's also punching. 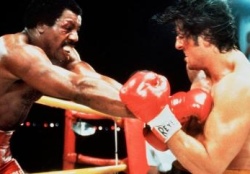 Later in the film, Rocky battles against the cocky champion Apollo Creed. Even though Rocky should be outmatched the fight turns into an epic 15-round contest for the ages. This boxing match could have taken any form. It could have been a bloody shootout, or a good old-fashioned swashbuckling sword fight, or a dramatic arm wrestling competition. Instead, the movie very deliberately set this matchup as a punching battle. Each punch in the boxing match represents a larger, figurative punch.

Now think. Where else have we seen punching? That's right! In the frozen meat scene! It can't be a coincidence that we saw punching in two completely different parts of the same movie. The filmmakers are clearly trying to tell us something. I believe it's punching.

Note how there continue to be punches in Rocky II. Perhaps even more importantly, there are gaps where no punches are thrown at all. This is very reminiscent of jazz, an entire genre of music which is defined by a well-known phrase, "It's not about the notes you play, but the punches you don't do". Rocky II is about the absence of punches just as much as the actual punches themselves, and is in many ways a better film than Taxi Driver.

Rocky III: Season Of The Witch doesn't really apply to the punch discussion. It's something of an odd duck in the series, as it does not star Sylvester Stallone or feature any boxing at all. There are these weird skeleton and witch masks from some company by the name of Silver Shamrock Novelties, and androids, and a magical/cursed piece of Stonehenge that summons snakes. I wouldn't recommend it unless you're really high or you've completely run out of Stonehenge-related films and have grown desperate.

Rocky IV, however, gets back on track. Rocky must defeat the Russian super fighter Ivan Drago, who at one 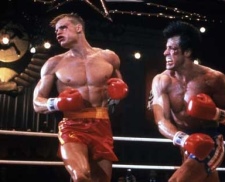 point declares in a thick accent, "You cannot punch me hard enough to win our fight, but I can punch you and hurt you very badly." That line would go on to become a very popular catchphrase worldwide. Also of note is the soundtrack which makes frequent references to punching with songs like "Punch You Tonight", "Tough Gym (Punching In Tough Gym)" and "Mortal Kombat". At this point the series comes dangerously close to being blatant about its theme of punching. Thankfully, it holds back just enough so the movie comes across as a knowing wink to those of us who are capable of reading into the subtext.

Sadly, Rocky V shows no such restraint. I mean, come on. A seventeen minute slow-motion shot of a single punch being thrown? The point could have been made much more subtly with a ten minute shot. Also, what was up with that climax? Rocky getting pinned beneath a metaphysical punch doesn't even make any sense. It's great that his son was able to find the strength to lift the punch and free Rocky, but that whole scene was so confusing, with all the close-ups of Rocky's straining face and bleeding legs but not a single shot of the punch, which I assume was a huge glowing forearm and closed fist.

Even if the message came close to being overbearing in the later installments of Rocky, it still serves as proof that the films were secretly allegories for punching from the beginning. If you don't believe me, go watch the series again. Watch for the punches. You'll be surprised by how many there are.

Thanks for reading. If I forget, remind me to tell you about the Matrix trilogy's message some time. Hint: It's computers.