Patrons of the Blue-Eyed Cupcake 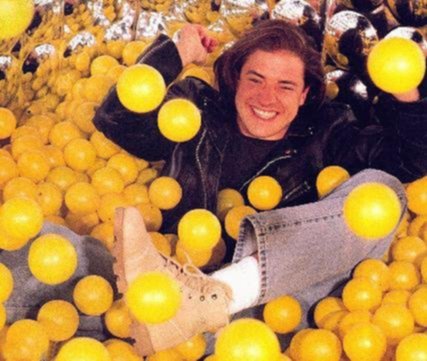 Patrons of the Blue-Eyed Cupcake, submitted by RosieODonatello. Who doesn't love has-been celebrity hunk worship websites with annoying easy-listening music (including John fucking Tesh) and agonizingly slow Flash navigation? Not me. I love them all like beautiful snowflakes.

The "Blue-Eyed Cupcake" website is dedicated to square-jawed Brendan Fraser, who first wet some middleaged panties with his Encino area caveman and has been wettening them ever since with his Tarzans. He has also possibly been giving boners to creepy old dudes as well.

First and foremost, this is not a "fan" site!. I detest the word "fan"! It derives from the word "fanatic" and implies that they lack balance. In the words of the man himself, we prefer to think of ourselves as "patrons". Brendan Fraser is a person who happens to have chosen the very public job of entertaining us. It’s a job he does extremely well; and as a part of this job, he has brought to life characters we’ve come to know and love and identify with. We greatly appreciate all his hard work and admire him for his talent, his sense of humor, and his integrity. We also admire his body - whoops, uh - the body of his work.

Of course there are a lot of pictures and a smattering of the tamest and lamest fan fiction you've ever read.

Grandma Ida tells me she wants me to meet a young man she has recently met herself. She says he's perfect for me. I don't know. I do like his name though. Grandma says his name is Brendan..........

That's the end of the story! It's so narcissistic that the whole thing is a woman describing herself and then at the end it's hinted that she's going to meet Brendan Fraser. Way to pay tribute to your dream man by mentioning him in the last sentence of your creepy fantasy story.