Kronish Sports is an astoundingly useless "sports news and historical research site" that brings you relatively recent sports news and scores, and also some really old sports results. Of course you could easily find that information on other sites, but then you'd be missing out on Kronish-specific features like huge font, endless drop-down menus and copious amounts of white space!

All the March Madness news anyone could want on the front page of a sports site in July, plus week-old MLB wrap-ups!

Richard Kronish, the 50-something namesake of Kronish Sports Enterprises, has been running the site for nearly 14 years. Maintaining a media empire is hard work, so Richard just hasn't had any time to learn basic design skills. Wait, scratch that, he learned how to make the middle column cyan. I guess that counts for something.

As for the site's substance, Richard prefers the "post links to articles on other websites" model pioneered by The Drudge Report, which looks refined and elegant next to Kronish Sports. It's a simple, low-effort content strategy, yet he manages to bungle it regularly. Perhaps you've heard of a recent big sports event known as The World Cup? One would imagine this would qualify as sports news, but the only mention of it is old scores from 1930-2010. It's like a movie site that doesn't cover the Oscars.

Still, unless you follow fringe sports like "soccer," or you have some sort of weird immediacy fetish when it comes to final scores instead of being willing to wait a week or two, there's clearly no reason to leave a site as comprehensive as Kronish Sports, unless it's to check out what Richard has to say elsewhere on the Internet! He urges readers to follow his Twitter account, which features insightful sports commentary, mysterious replies to nobody, and complaints about gay guys kissing. The latter topic earned him an unprecedented 2 retweets, which he took as a sign that he's finally getting a grasp on this Twitter thing. Just give him another decade, and he'll find a way to add cyan to his Twitter page! 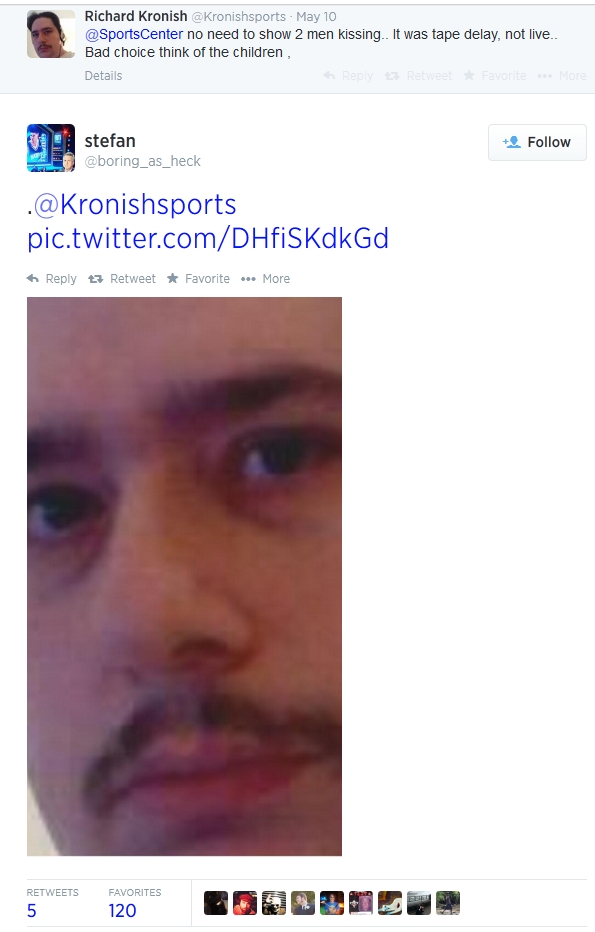