The Flat Earth Society (Thanks, Joshua!)

Tired of dealing with climate change denialists? Imagine dealing with round earth denialists! The Flat Earth Society - not to be confused with The Flat Earth Society, which they recently split off from for minor reasons - is a group of freethinkers who refuse to drink the Round Earth Kool-Aid. Instead, they believe we live on a flat disk bordered by large ice walls that keep boats from plummeting off the edges!

Sure, it sounds silly, but their new Wiki throws down the gauntlet:

Throughout the years it has become a duty of each Flat Earth Society member, to meet the common round earther in the open, avowed, and unyielding rebellion; to declare that his reign of error and confusion is over; and that henceforth, like a falling dynasty, he must shrink and disappear, leaving the throne and the kingdom of science and philosophy to those awakening intellects whose numbers are constantly increasing, and whose march is rapid and irresistible. The soldiers of truth and reason of the Flat Earth Society have drawn the sword, and ere another generation has been educated and grown to maturity, will have forced the usurpers to abdicate.

With such a badass mission statement, who can resist their archaic philosophy?

Their rebuttal to millennia of scientific study is basically "nuh uh!" wrapped up in all kinds of intellectual-sounding Logic 101 terminology. Ever heard of Occam's Razor, idiot moron?

What's the simplest explanation; that NASA has successfully designed and invented never before seen rocket technologies from scratch which can accelerate 100 tons of matter straight up at 7 miles per second, and that NASA can do the impossible on a daily basis, explore the solar system, and constantly wow the nation by landing a man on the moon and sending robots to mars; or is the simplest explanation that they really can't do all of that stuff?

What's the simplest explanation; that the sun, moon, and stars are enormous bodies of unimaginable mass, size, and distances which represent frontiers to a vast and infinite unknowable universe teeming with alien worlds, black holes, quasars and nebulae, and phenomena only conceivable in science fiction; or is the simplest explanation that the universe isn't so large or unknown and when we look up at the stars we are just looking at small points of light in the sky exactly they appear to be?

Oh, you think rain is atmospheric water vapor condensed in the form of droplets as part of the water cycle that's essential for the sustainability of most life on the planet? Isn't the simplest explanation that it's just God's tears? Boom, checkmate, Occam's Razor, Q.E.D.

Yet Flat Earth Theory doesn't really seem all that simple, because once you stop believing in the Spherical Earth charade, you suddenly have to make up new explanations for everything. For example, since it's not an orb, Earth can no longer be called a planet. (The concept of Flat Mars is just silly.) 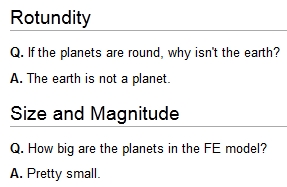 Also, gravity has been replaced by "Universal Acceleration," a theory that posits the reason things fall down is that Earth is constantly moving upward. It's an intriguing premise, and the illustrations that document the related Equivalence Principle are quite compelling, but unfortunately the globe gestapo has put a kibosh on further study:

The are several explanations for UA. As it is difficult for proponents of Flat Earth Theory to obtain grant money for scientific research, it is nigh on impossible to determine which of these theories is correct.

What do the Flat Earth Society's soldiers of truth and reason do when they're not engaged in fierce intellectual battle for the fate of the kingdom of science and philosophy? Discuss the cult classic sitcom Community, apparently. At least one small faction on the Flat Earth forums can claim a recent victory involving something they advocated against the odds!