The Fountain Pen Network (Thanks, Gilgameshback!)

In this vulgar world where correspondence mainly occurs on Facebook or Twitter, fancy pens provide an air of sophistication and luxury. Finally you'll be writing shopping lists with class. At first glance, it might seem decadent to collect pens that cost more than a car, but the connoisseurs who frequent the Fountain Pen Network forums have run the numbers, and it's actually quite cost-effective:

If you write 1000 words a day for forty years, buying a custom $2000 pen might come off as cheap in the end. It's far cheaper than buying a pen you'll use once every week for only a year, at least.

Why, it practically pays for itself after the first half-century!

Like most high-barrier-to-entry hobbyists, these pen-pushers must contend with accusations of snobbery, which they don't exactly do a great job of disproving:

what irritates me is the attitude of people in society who ask me why I would want a Fountain Pen. They are just ignorant and in the future, when im sitting in my spacious office with some antiquated desk pens and lots of flash Montblanc desk accessories then I will ask them why they settled for less.

Something that bugs me is when someone takes note of a pen I'm using and comments or ask about them...they never want to listen to what I want to say. i.e. I was writing with a Parker Vacumatic one day and the guy next to me asked me about it. I got excited and started explaining about how old it was, what a date code is and the filling mechanism. I could tell he quickly lost interest. Oh, well.

Fortunately for pen fetishists, the FPN hosts upward of 30 specialized forums, ensuring that they'll always have a place where they can commiserate about misaligned tines and fragile resins. When conversation strays from writing instruments, these sophisticates celebrate other examples of fine craftsmanship, like the Glock 20, "the modern day equivalent of the nobleman's rapier."

Apparently, though, even these refined aesthetes aren't above heated Internet disagreements. "Ink bashing" nearly plunged the board into total chaos until the moderators stepped in and restored order. Oh, and be careful around the numerous cliques of brand enthusiasts. You do not want to mess with the Montblanc gang, trust me:

You must have bad luck or you are buying used/abused pens in less than pristine condition, because in the MB forum leaks are infrequently mentioned, and they are usually pens that have not been maintained properly (usually ink left to dry out in a pen). I have used MBs x 15 years, and none have leaked. I've used numerous brands of fps for much longer and only a few vintage pens with bladder holes have leaked. So you have dozens of MBs. Let's see a group photo. Surely someone who can afford so many MBs has a camera.

You say your pen leaks sometimes? Sounds like you're either a vile troll or a negligent slob unsuited for the responsibilities of luxury-pen ownership. Perhaps the the lowly Bic stick is more your speed? 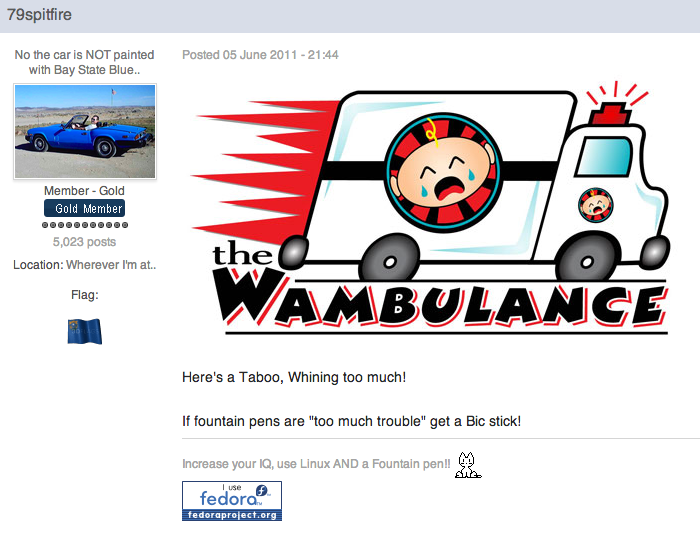