Spells and Magic (Thanks, Ethel Alcohol!)

Spells and Magic is a guide to the world of the occult, led by a putz named "Puzuzu" who claims to have "mastered the dark." Every sentence in the biography he wrote about himself is simply amazing: 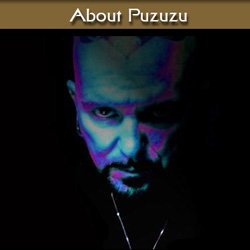 "Puzuzu is a Teacher of the Occult Arts and Spiritual Counselor along with being a UFO Hunter, Artist, New Age Musician/Song Writer and "Pioneer of the Unknown". He describes himself as a Beacon of Light for the World. Puzuzu is also the Author of the book entitled "Those Who From Heaven To Earth Came". He is an old soul, having lived 1,048 lives here and on other Worlds. An Eccentric Being in this life would be an understatement."

If you're hoping to get into magic, Puzuzu has generously compiled a bunch of spells for you to try out. Here's an example of a lust spell, which you can only do on Tuesdays for some reason:

Venus, Mighty one of Lust!

I call upon you with your trust

To bring this person to me now

Your fragile trust is your vow!

Spells have to sound like they came out of a Dr. Seuss book, apparently.

Once you've mastered the lower levels of sorcery, you can move onto "High Magick," which is much more powerful than your normal, garden-variety Witchcraft. You've got to be really careful, though. You don't want to accidentally bring Cthulhu into existence when conjuring a ball of light, do you?

For more advice, you can learn from Puzuzu himself over Skype for just $20 an hour. NO, he will NOT do magic for you during these sessions, so stop asking.

Puzuzu's greatest magical feat, however, is his ability to remove society's blinders and tell it like it is. His section on "The Control System" features a bunch of cool rants about how people are brainwashed sheep and religion is all bullshit, man. Be careful not to burn yourself on this hottest of hot takes:

Then some of us think we have awakened, and switch to a different religion. By doing so, you might learn some new information. However, the new information you learned, is just another party balloon filled with shit sprinkles.

It should come as no surprise that Puzuzu also subscribes to a number of conspiracy theories, from chemtrails to vaccines. He's not paranoid, though, just well-informed:

What I'm telling you is fact. It is told to me personally by the Celestial Gods Enlil and Enki.

Oh, and of course NASA faked the moon landing. He knows this because of his friends in high places:

They want you to think that you are the only living beings in this Universe... just as they lie about all the UFOs that have been seen by humans thousands of times. I myself have over 3,000 UFO pictures that I have taken personally myself. I have also communicated with the Celestial Gods that control these Skyships. So I know firsthand that NASA is as corrupt as you can get.

Frauds! Everyone knows if you want to travel to the moon you have to draw a pentagram and recite a limerick (Saturdays only).