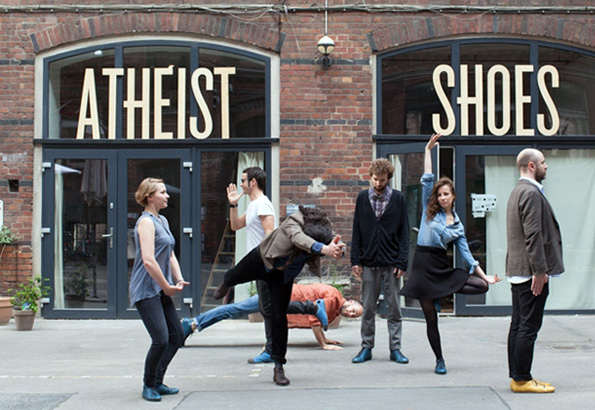 ATHEIST is a small German-based startup whose main business is cobbling ugly artisan shoes that say "ICH BIN ATHEIST" on the bottom. Finally, an opportunity to loudly declare your non-beliefs to the world, if by "world" you mean an old-timey cartoon detective tracking your muddy footprints with a comically oversized magnifying glass. 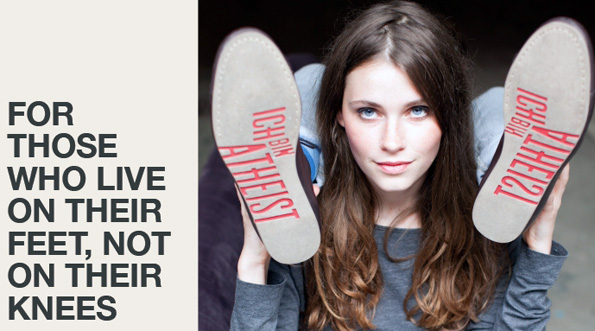 According to ATHEIST's "about us" page, the shoes "went gangbusters" on reddit. Apparently, the godless heathens of r/atheism were so dazzled by a photo of the prototype that they gave it almost as many upvotes as a picture of the word "LOGIC" scrawled on a slice of bologna. This snowballed into a Kickstarter campaign featuring a cloying video where ATHEIST's soft-spoken, kitten-magnet co-founder David jokingly muses his creation could become a "Grindr for the godless," Tesla willing. Or maybe it wasn't a joke; the potential for atheist meetcutes is also used as a selling point on the site:

Maybe our shoes will make it easier to spot the sexy, free-thinking people you like to hang with? No more hours wasted chatting up a pretty stranger only to discover they believe some invisible, magical sky-daddy is looking down and holding a view on whether they should sleep with you or not.

Yow! That's some spicy mulligatawny! Don't worry, they have a hot Christian friend and she said it was ok to call her a stupid idiot who still believes in fairy tales.

Alas, not everyone rejoices at the sight of the word "atheist" on an object. In a reversal of the reddit effect, U.S. postal workers were allegedly so enraged upon seeing boxes sealed with "ATHEIST-branded tape" that they all unilaterally decided to deliver the packages late. It's a damning indictment of governmental discrimination against the faithless, and also a shrewd marketing move. Stick it to the (mail)man by buying a boutique version of the tacky Darwin fish!

So, what's next for ATHEIST's small staff, which includes a musician for some reason? Aside from the groan-inducing April Fool's Day joke they still haven't taken down, they've been trying to branch out into new avenues. For sale: atheist baby shoes, hopefully never worn.