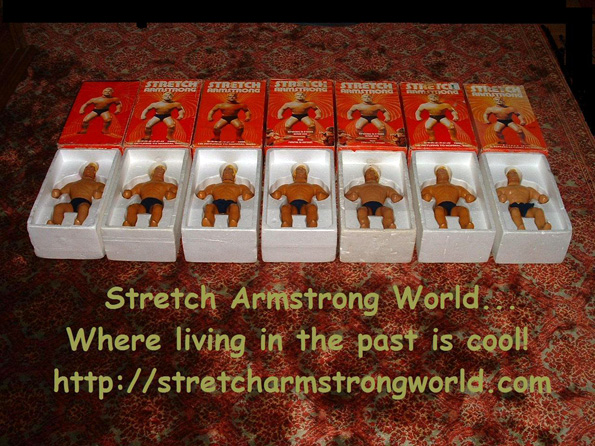 Stretch Armstrong World is the first and likely only fansite devoted exclusively to "the cornsyrup filled he man himself," Stretch Armstrong. Hopefully you still have one of these rubbery action figures around somewhere, because the site reports "their value has remained more stable than Gold making them a truely [sic] great investment!" Once the economy is destroyed and the world descends into chaos, we'll have to barter using "Fetch Armstrong dogs", so it's best you start your collection as soon as possible.

The site, a horrible mess that was created in 2006 but looks like it was spat out in 1998, is ruled over by a collector who calls himself "The Stretch King." His childlike excitement over his vast collection ranges from endearing to just plain weird:

The Stretch King claims to be "the only person in the world to have owned every full size stretch figure ever produced," but apparently even that's not enough to fill 120 image slots, given that the last of his "Mega Blast" 40-photo pages still features sample pictures from whatever gallery template he used.

The King estimates his full collection to be worth $171,000. It includes such rarities as a mint Mego Elastic Batman allegedly worth $40,000 and a "Stretch X Ray" once owned by... Leonardo diCaprio?!?

Well Ill tell you why this is the single rarest Stretch. This Stretch X Ray was originally bought brand new and was owned by Leonardo DiCaprio, (The Actor from the Movie Titanic).The only chance of ever finding another one of these X Rays is if you call up Leo, Darn you dont have his Phone Number, Then Ask him to go back to 1977 and buy a new X Ray, Darn again, we havn't invented Time Travel yet, Then after you call Leo and he goes back in time 30 years and hopefully gets back to the future,you can politely ask him to sell it to you. Hows that for Rare! Leonardo DiCaprios personal Stretch X Ray, the only one that will ever exist. 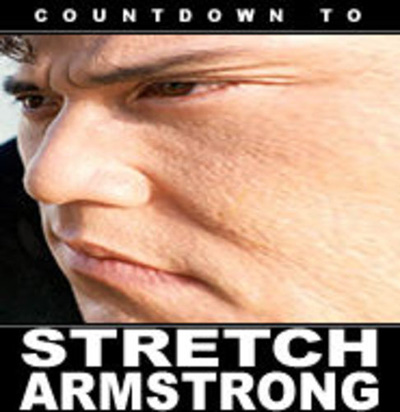 The King might be the only person eagerly anticipating the Stretch Armstrong movie, which appears to be stuck in development hell. Don't stop believing!

It's clear that collecting Stretch Armstrong is no longer just a hobby for this guy, but instead it has become a crippling obsession. Just look at his dreadfully dull interview with some guy from the toy company about the Stretch Armstrong dipping process and tell me it isn't worthy of an intervention.

What is it about ol' Stretch that inspires such devotion? For the King, it's nostalgia for a bygone era:

I feel that the 1970s were the last decade when toys had real meaning and originality. Today everything is mass produced with robots and every toy looks exactly the same.The 70s were the last decade when kids actually went outside and made new friends,instead of making so called friends on facebook or Myspace. We played Kick the can,Hide and go seek and street hockey.When we got hurt it was out fault and we didnt sue our best frind or neighbor.getting hurt was part of the fun.

Damn kids today with their computer gizmos, unable to enjoy the simple pleasures of a toy bodybuilder with stretchable limbs.

What happens to a collector when they've collected everything? They evolve into a new plane of existence. Farewell, Stretch King.... hello, Stretch Wizard. 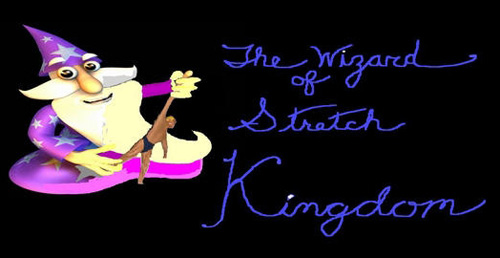