If WisheRs were Horses (Thanks, Moat!)

Wednesday, Apr 22, 2009 by Andrew "Garbage Day" Miller
Know of an awful site? Send it to us and become a hero!

Pluses of becoming a horse: increased running speed, muscular physique, ability to kill with a kick, knowing that after death you'll be converted into an adhesive paste for schoolchildren to eat and use in crafts. Minuses: Straw diet, shortened lifespan, heightened likelihood of being whipped and spurred, broken-leg fatalities. Really, it doesn't seem like "Destrier" and other "human-equine transformation" candidates have given much thought to the ramifications of species-changing, which is just as well because, of course, it's completely fucking impossible.

In the "methods" section, Destrier breaks his false-hope nonsense into several categories. Under "Science," he delves into "Spontaneous Quantum Tunneling," opening with the surprising assertion "There is a small but finite chance that here, today, you will suddenly turn into a horse. A good physicist will confirm this." Under "Magic," he addresses sympathetic magic, a phrase that conjures the image of a kind old wizard saying "I'm sorry you're a pathetic ninny obsessed with becoming a horse, and as such I'm mercifully casting the spell of silent death."

While waiting to sprout hooves, Destrier sketches disturbingly sexualized mid-mare transformation women, like this NSFW image misleadingly captioned with the word "dignity." He also paints standard fruity unicorns, though he doesn't have any advice on how to metamorphose into one of those. I guess he had to draw the line somewhere.

According to a flashing update on the home page, If WisheRs were Horses is currently 27 percent complete. It's unclear whether this number represents improvements made on the site since it was originally mocked in 2004, or if it indicates how far Destrier has progressed toward his personal goal of becoming a prancing pony. 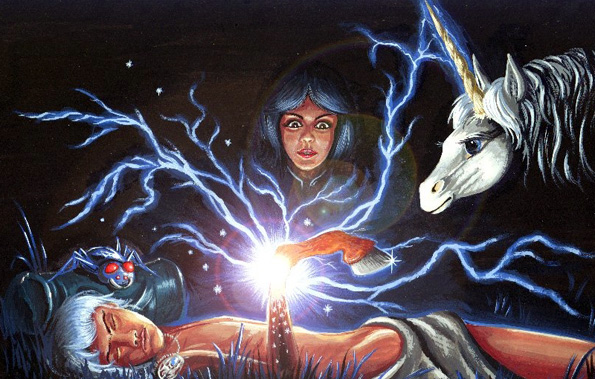