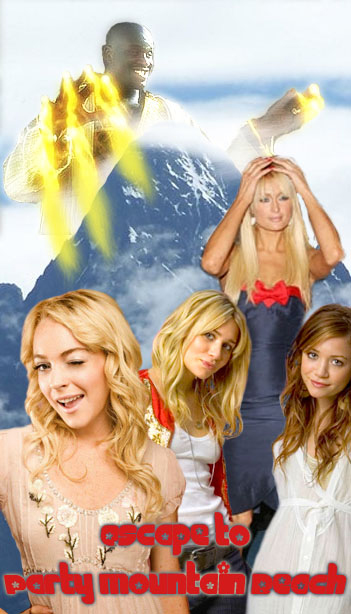 Plot Outline: Three girls take an uncharted shopping trip to a mysterious party island. Little do they know, this island is home to mummies, magic, and a mysterious amulet which may give one of the girls a chance to reunite with her missing ghost... (more ) (view trailer )

Paris Hillsmeyersworth III: The only thing I hate more than my parents getting killed by hurricanes is hurricanes.

Lindsay Lohberry: I think it's about time we escaped to Party Mountain Beach! (grabs breasts firmly)

Gambala the Shopping Genie: Shim Boom GAMBALA! (punches hole in mountain)
Asian Beachcomber: (rubs eyes and throws bottle of whiskey behind his back)

Volcano Prince: (claps hands) Summon the gay mummies.
Asian Beachcomber: (rubs eyes and throws bottle of whiskey behind his back)

Paris Hillsmeyersworth III: So far the gay mummies have done our hair and let us complain about our boyfriends to them - what next?!
Gambala the Shopping Genie: Me no boombamba like this!
Lindsay Lohberry: Of course not, Gambala; you don't have hair, so they had to braid your skin!

Paris Hillsmeyersworth III: Oh my god the porpoises are RAPING ME!
Asian Beachcomber: (rubs eyes and throws bottle of whiskey behind his back)

Party Grandpa: (slaps her in the labia) Don't cross me, you fucking swine! (more)