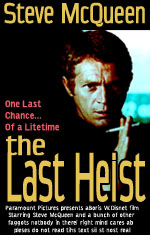 Duke DiMarco: This is it for you, Baxter. This has got to be your last heist.
Jack Baxter: Horseflop. (more)