The movies have returned, but you probably don't want to see any of them. Hell, I haven't even heard of some of these things. First up this week, Martin R. "Vargo" Schneider exposes the spoilery awfulness of No Good Deed. Next, Joseph "Jay Dub" Wade finds a few things to enjoy about the Tom Hardy/James Gandolfini film The Drop. Jordan "CloseFriend" Saïd then suffers through the saccharine feel-goodery of Dolphin Tale 2. Finally, Sean "Keanu Grieves" Hanson dips into the VOD stream for a look at Honeymoon. We would have reviewed the third Atlas Shrugged film this week, but it just plain wasn't available for any of us. The free market works in mysterious ways...

EXPECTATIONS: It's not unusual for a studio to cancel advance critic showings for a film they have absolutely zero faith in, but this one is particularly noteworthy. When Screen Gems announced the cancellation, they attempted desperately to save face by claiming the cancellation was due to fear that the twist ending was so amazing they were afraid critics would spoil it. Well, guess what, geniuses? You just told me there was a twist! Telling someone that a movie has a twist is the most spoilery non-spoiler possible. So now I'm going to be spending the entire runtime trying to figure out this massive amazing twist you're so worried about me ruining. Which is good, I suppose, because at least that means my brain will be too busy on that to focus on how bad this is going to be. 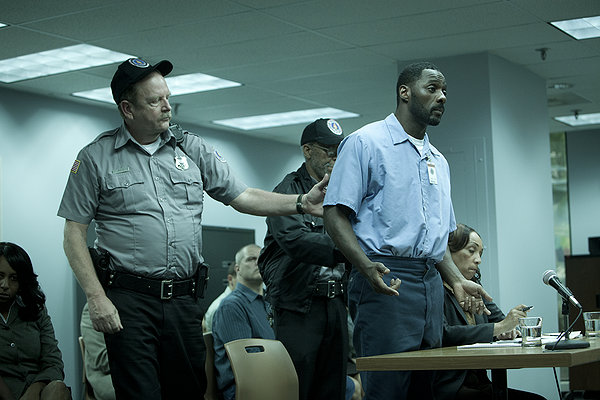 "That's right, I spoiled the movie! And I'd spoil it again!"

REALITY: Three-quarters of the way through No Good Deed, desperate heroine Terri (Teraji P. Henson) asks her assailant/captor Colin (Idris "Too good for this" Elba) the question we've heard from countless put-upon damsels: "Why are you doing this?" To which, Colin replies ominously, "You'll see." Conveniently, this was also the text of the conversation I was having in my head with the producers of the movie about that time.

Before I do my normal second-paragraph plot summation, let me give a heads-up to any Screen Gems or Sony Pictures execs who might be reading: Don't worry, dillweeds, I'm not going to spoil your precious twist. You know why? Because there is no twist. That thing which you claimed to be a twist so amazing you had to cancel all critic screenings? It's barely even a plot point. It's, at best, a mildly intriguing coincidence between two tertiary characters. It is disingenuously passed off as a twist, but really gives no meaningful context to the events which preceded it, and ultimately does not affect our outcome or our understanding or expectations of the primary conflict, which is what a twist is supposed to do. You should know this, because you are people who produce movies. 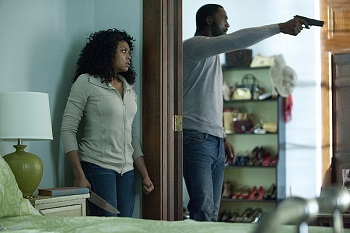 Don't go out there; he's armed with spoilers.After a failed parole hearing, convicted felon and probable serial killer Colin escapes from his prison transport and proceeds to murder his former girlfriend. So there you go, the twist is NOT that Colin is innocent or even slightly ambiguous. After crashing his stolen truck during a storm, he makes his way to Terri's house, where she is home alone with her young children because her husband is out of town. What follows should be a game of cat-and-mouse, as Colin tries to draw Terri closer to him. Instead, we are treated to a full-on second act of script-stalling, as every time it looks like the film is in danger of something interesting happening, a wonderful off-screen interruption miraculously saves the movie from progressing. When the conflict does force its way into the forefront, it's a by-the-numbers battle, filled with the horror and thriller clichés we've seen a million times before, culminating in the "twist" in the last five minutes.

Horror/thrillers often seem like cautionary tales warning the audience not to do anything, ever. This is why so many horror movie rules and even taglines read like victim-blaming. "Don't go into the water." "Don't answer the phone." "Don't go upstairs." "Don't ever have sex in the woods, for the love of god." These are rules and tropes which we have put into our heads so we can yell them at the screen, telling ourselves that we are smarter than the on-screen characters. That is why No Good Deed's basic premise rubs me the wrong way: Even from the trailers, anyone can tell that the rule in place for this film is "don't let the scary Black man in your home," or at the very least, "don't trust the charming Black man." It's comparable to the Eli Roth paranoia mentality which dictates that if you are a woman and you ever travel abroad anywhere, you will be raped and tortured, except here it's literally applied to staying in your own home. Since we live in a world where Black people actually are shot and killed on porch steps when asking for help with car trouble, doing anything to feed this fear seems tasteless at best. 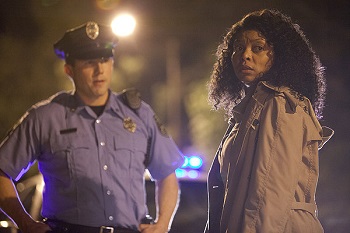 "Ma'am, are you okay? Did he spoil the movie?"It's hard to analyze a film like this on its own merits because there's just so little of note occurring. Idris Elba toes the line between charm and danger pretty well, but we're well aware that this is something he can do; we've seen it in most of his other performances. This isn't a well-liked star taking a role against type a la Denzel-in-Training Day, it's a studio which went looking for "an Idris Elba type" and happened to stumble upon the real Idris Elba in a generous mood. Henson also attempts to acquit herself of the material she is given, but instead she is relegated to playing a straightforward "final-girl" role without a hint of subversion or self-awareness. Essentially, all of Elba and Henson's attempts at salvaging are thwarted by an onslaught of lazy writing and boring direction. There are literally dozens of films which cover this same territory, and virtually all of them do it better.

MINORITY REPORT: I really hate titles like No Good Deed, because they force me to finish the sentence in my head and figure out what the hell they're referring to. Whose good deeds are being punished? Isn't this movie about murder and adultery? Are those good deeds? Man, I don't even know anymore. - Joseph "Jay Dub" Wade