At the Mickey Mouse club in Disneyworld we had an honest-to-god fight club going on when I went there as a 3 year old. My parents left me off to go somewhere at night, and I can remember battling it out whenever the attendant wasn't in the room.

We fought with chairs, fists, toys and teeth. A few teeth were lost, fun was had.

In all honesty go to any amusement park in Southern California and you will see the worst spawns of humanity. The worst ones are the small, weird ones that are really cheap to get into, like Pharaoh's Lost Kingdom in San Bernardino. My 8th grade class went there for our graduation party, and it totally sucked. Some of my friends and I were going on one of the water slides, so we were at the top of this 3-storyish tower and there was a guy with several small kids in front of us. One of the kids, without any warning whatsoever, leaned under the railing next to the slide, and puked everywhere. You could see it dripping down the outside of the slide and down into the pool at the bottom. The dad apparently didn't notice this, and the kid just got up as if everything was fine. The attendant sending people down the water slide didn't notice either I guess, because she continued to send people down into the puke pool. My friend and I told her what happened and she still did nothing. So we turned around and went down the other water slide, which led to a different pool, because we weren't about to land in toddler vomit. Like an hour later, as we were headed towards some other ride, we finally saw people cleaning it up. What the fuck.

One good thing about it, though, was that there were no scooter fatties because going to a water park would actually involve walking up stairs to get to the rides.

At the zoo I worked at, there was a pretty steep hill in one part. Maybe about 50 meters long. One of my coworkers felt sorry for an elderly couple and gave them a ride up in his golf cart. He ended up having to give about 10 fatties a ride up because of that.

I have a special hate for those who bring their kids onto rides they don't want to go on, like when I saw a small boy in line for Alien Encounter, crying and asking if the aliens were real. I was thinking, "Oh geez, if he's not old enough to understand the aliens are fake then he really should not be on this ride." Sure enough, the mom drags him onto the ride and he starts screaming and crying at the top of his lungs. Why would you do that to a kid? It's one thing to force them to do something for their own good, but Disney World is supposed to be for fun...

The other theme-park-goers I really can't stand are people who scream at cast members for no good reason. I saw a woman screaming until she was red in the face and having to be restrained from hitting this poor girl at the Rock and Roller Coaster -- she was enraged because the girl let the Fastpass people go in ahead of the woman and refused to listen to any polite explanation of the Fastpass system. I don't understand what has to snap in your brain to where you think it's acceptable to scream at some worker because it's raining or a ride broke down or something that's totally out of the cast member's control.

I used to work at an amusement park, so I've seen a little bit of everything. I used to like working in the flume ride tower, because no one thought you could see them and as soon as the ride would dip behind the trees they'd start doing things like making out, smoking pot, having sex, stuff like that. When they'd come by my tower booth later in the ride, I'd just grin and wink so they'd know I'd seen everything. Some of the looks of horror I got in return made up for the shitty pay and hours.

Sometimes on the flume ride, people would flip out right before the big drop and try to get out. The attendant's booth is right in front of the drop, so one of the responsibilities I had was to make sure people don't climb out of the boat. Probably 1 out of every 10 boats had someone in it that would yell at me to stop the ride so they could get out, which I wouldn't, so they'd scream at me that I was an asshole until they went screaming over the edge in tears, which made me feel much better about all the abuse they had just shouted at me. The ride 15 minutes to restart, so if we shut it down every time someone changed their minds, the ride would basically be shut down all day. One day this one kid wanted off and I couldn't stop the ride, so his mother tried to help him off the boat while it was still moving. Not even on the side that had a walkway on it, she was helping him climb the side with nothing but a 30-foot plunge onto some huge rocks. I actually had to shut the ride down for that one, and then run out screaming at her not to chuck her kid to his death.

Yes, for those of you who haven't been to an amusement park in the South, let me tell you, the sheer concentration of hambeasts is overwhelming. Seething mounds of flesh riding on the motorized fatty wheelchairs (we call them "meat wagons") and usually accompanied by a brood of soon-to-be hambeasts. My family has made a competition out of it: whoever can document the fattest person at a theme park wins. I got a shot of this specimen at the Mt. Everest ride at Disney World: 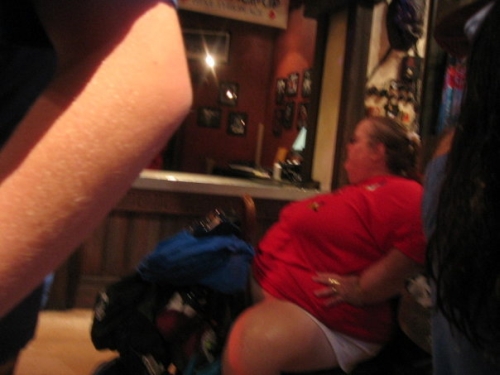 Note the belly sagging through the shirt and straining the frame of the meat wagon.
Other... highlights of the trip include a lady on a meat wagon with a value-size jar of mayonnaise in the carrying pouch, and a guy dual-wielding those huge turkey legs they sell there. Truly fascinating.