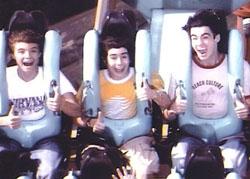 You know, I am always disturbed by the amount of human feces present in some of these places. On multiple occasions as a kid and teenager, I had accidentally put my hand or foot into someone's waste that they conveniently left in some kind of tunnel you have to crawl through, or on a water ride.

"Oh man I just put my hand in some mud. Wait, that smells a bitOH JESUS FUCK NOT AGAIN! WHAT'S WRONG WITH YOU FUCKING PEOPLE!"

Seriously, that ruins your day.

I watched an entire family throw up after going on Space Mountain at DisneyLand (whatever that tunnel roller coaster is called). They were all overweight and had stuff themselves with ice cream and hot dogs before going on the ride. That was wonderful.

I've been run over by a lady on a scooter as well, she lost control of it and rammed her way through the line to a candy booth at Paramount's.

When I was about 7 years old my family went to Disney World. I was standing in line with my mother in one of those lines that seem to not budge for hours for something or another. To make things worse I had to piss worse than I ever have had to in my life, so I slipped out of line into the bathrooms and opened the nearest stall. What I saw is still burned in my memory like it was yesterday.

Someone had shit in his underwear, cut his tighty whiteys off and just left the mess in the toilet.

I didn't have to pee anymore.

About a year or so ago, my family and I were just sitting on a bench in the Magic Kingdom at Disney World when a scooter with this hambeast of a woman on it drives by and stops. She gets off, starts walking and switches with her redneck husband in riding the scooter. It was pretty surreal at the time, but it seems to happen more and more. I feel lazy just using an automatic door button, just think about being that lazy boggles my mind.

I used to work at Busch Gardens in Tampa, and my stories mostly suck. Nothing really exciting happened the summer I worked there.

Some of the more entertaining things I saw:

*People barf on wooden roller coasters. What the heck!? It doesn't even loop or anything. I liked to say that it was more like some giant dude shaking your head violently for 2 minutes than a real roller coaster.

*Drunk fatties think that if they shake their 'goods' at you, they will get skipped to the front of the line quicker than magic. This is not the case. We just laugh at them.

*It seems like parents of small children don't care that much about them. I've seen plenty of unsupervised kids running about while their parents rode the ride. Also, the case of the parent trying to get his tiny kid (nearly toddler stage) to ride even though the kid would FLY OUT OF THE RIDE if he rode it. He wasn't happy about how regulations required us to not let this happen.

*When it rains, we have to shut down the ride. Since it thunderstorms nearly every afternoon during the summer in Florida, I told endless streams of people that the ride was closed due to weather. I would tell someone why the ride was closed and the person directly behind them (Less than 2 feet away) would ask the exact same question, quite often phrasing it "So it's closed because of the weather, huh?" Then they'd ask when the weather would clear up. Apparently working at Busch Gardens makes you a weatherman. I guess that part of the training must have been in between a couple of the corporate brainwashing sections where I fell asleep.

I do love it when people stuff their face with food and then throw up after a ride. I remember seeing a girl drinking a monstrously-sized neon green Slurpee, and then seeing her vomit neon green after riding Batman.

On my senior trip, a couple of my friends rented those scooters and raced them down Main Street USA. They didn't even get yelled at!

So those scooters can be used for good things as well as carting around 800lb gorillas.