Dad couldn't wait to get going. He threw me in the back seat and my brother in the front and took off driving the side streets.

"So which are the roads with the kids for my bumper? I only need ONE outrageous car jumper!"

Fate decided to taunt him, as that particular weekend was not ripe with many children playing outside. Or at least not those willing to hop his car. He found a small group of young tots but they ignored us as we drove by.

Mad was my dad, and he started to yell: "Dammit God dammit, God dammit to HELL!"

"I dunno dad, maybe you're going too fast? Those kids are pretty small and might not know how to properly hop a car yet." Dad circled the block several times, each one driving slower and slower. Finally he was creeping so slowly that I could have walked faster on my stubby little 3rd grade legs. The kids eventually noticed him. How could they not? A VW Bug constantly driving by them on the street, slowing down and the driver glaring at them crazily? They were unnerved enough to yelp and run inside their house. Dad continued to drive my brother's car the rest of the weekend but nobody tried to grab the electrified bumper. This made him angry, because this was something he wanted badly. I think at this moment he wanted this more than anything he had ever wanted before. 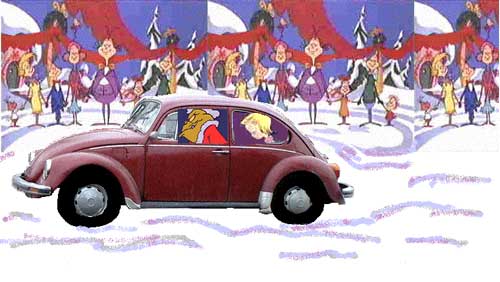 Monday rolled around, and after work he loaded me, one of my brothers and my mom into the car. He drove around, there were plenty of kids out playing. We turned a corner and saw about half a dozen young teens, 7th graders by my guess. They looked like trouble, and dad smiled. He knew. We all did. This was it, and it was going to happen.

Dad slowed down a bit, and I turned around on the seat to see two of them lunge for the bumper and disappear from view. Dad then flipped the switch... I heard yelling, and saw them stand up, staring at their hands in disbelief and shaking them.

"That's a noise," grinned my dad "That I simply must hear!" So he paused, and my dad put a hand to his ear... "They are just finding out, I know what they'll do. Their mouths will hang open a minute or two.. "HA HA little Bastards who slid on your shoes-- now run to your mommies and cry your Boo-Hoos!" 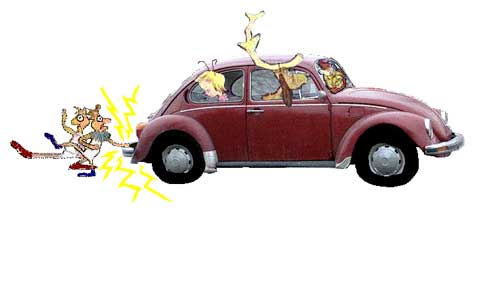 He quickly drove around the block past them again. The two boys looked dazed, one was wiping away tears. The other boys were crowded around them talking at once. They didn't know exactly WHAT happened, only that SOMETHING did. They stared at our car as we went past, nobody jumping for the bumper this time.

This renewed my dad's sense of justice. He began coming home at lunchtime so he could drive by the schoolyards and tempt more kids to hop his car. He'd sometimes sneak out of work early and do the same thing. Word spread about the red Volkswagen Beetle.. kids in my class would come up to me and ask about it. They heard stories from older siblings who got hurt and wondered what happened. I told them my dad rigged up the bumper to shock people. This caused a brief flurry of bravado attempts to hurl themselves at the rear bumper, but they fizzled quickly. Once they got shocked they didn't want a second try.

For a while I was briefly renowned as the girl with the crazy dad, but as winter faded so did the stories of the electrified GrinchMobile and with them melted away my popularity...

Like I said, next week'll have more Crazy Dad Stories. So be back then, or I'll take your sock!