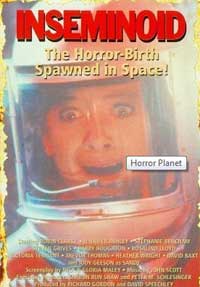 Directed By: Sir Run Run Shaw, whose name gives you not one but two hints as to what you should do upon being asked to watch this crap.

The Case For: Will evoke nostalgic memories of those tense moments playing the Doom demo for the first time.

The Case Against: Will evoke nostalgic memories of those tense moments holding the Inseminoid DVD case in the horror aisle of your local video store and inexplicably choosing to watch it instead of doing something more enjoyable, such as cleaning the garage or becoming a hobo.

Welcome, faithful readers, and a merry Christmas season to you both! Here at Awful Movie Reviews, you can't say "Horror-Horror-Horror!" without "Ho-Ho-Ho!" Of course, that does leave you with "rror-rror-rror", which if you say it out loud turns out to be the same noise your brain makes as it desperately tries to pull a McFly and travel back in time to a point before I forced to witness Insemenoid, a thoroughly shitty film I can only recommend to shameless and unabashed masochists.

Some readers will recall my last review of Wizards of the Demon Sword in which I differentiated between movies that know they're bad and movies that don't. Inseminoid, I'm pleased to report, falls firmly into the second category. This is one of those flicks that gets just enough right to keep from collapsing entirely into horrible self-parody; instead it lingers in a sort of dreamlike Suck Zone, sometimes hinting at escape only to topple backwards into the Zone, like a three-legged man climbing a red-hot ladder while directing a really horrible movie. 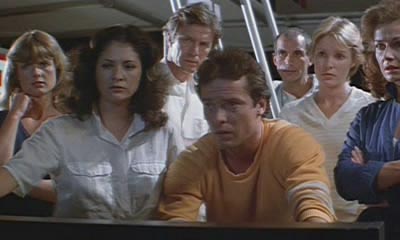 Captain's Log, Stardate 90210, from the starship U.S.S. Big Chill Inseminoid was ejaculated into general release in 1980, only two years after the release of another, slightly better space horror film whose name I will not reveal. See if you can guess which film I'm thinking of; your hint is a verbatim excerpt of the back cover of Inseminoid:

"&A silent, lifeless world. Until they broke open the underground chamber and discovered in the most vile way imaginable that the planet was not truly dead. That a sleeping life form had been waiting for millennia, needing only a chance to breed before escaping to spread like a foul, devouring disease into the lifeblood of the universe. And to breed it needs the bodies of those who had disturbed it."

Unfortunately our director, Sir Run Run Shaw, forgot to lift some other key elements from Alien, such as a strong cast, character development, and compelling dialogue. I use the phrase "character development" with hesitation. After all in order to develop characters, you have to have some in the first place, right? Sorry, but we're not blessed with characters in Inseminoid, just, y'know, people walking around and talking. I can only hope that this is some attempt on the part of Sir Run Run to make some sort of social comment on how we're all machines or something. Everyone in Inseminoid has nice, bland names like Sandy and Gary and Ricky, and nice, bland faces, and nice, bland lives being scientists out on some godforsaken planet that looks like Utah without the Mormons. They wear nice, bland jumpsuits, with the notable exception of Gary, who quickly establishes himself as the "lone wolf" of the team through his devil-may-care adoption of the striped-sleeve sweatshirt. 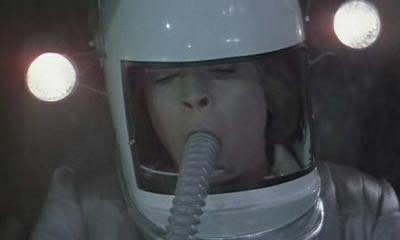 I give up. How would you like me to caption this? The one truly interesting element to Inseminoid is its uncanny resemblance to the original Doom videogame. In all seriousness, the parallels are amazing. There's lots of creeping around a base that seems to have been constructed in a 2D editor using about four surface textures. There's barrels and boxes and metal walkways and poor lighting. There's even alien carvings on the walls to go with a legitimately unsettling aura of human technology layered clumsily over the remnants of an ancient civilization. Of course, when as a film your greatest attribute is your superficial similarity to an Windows 95 FPS, that's a problem.

Our fearless scientists uncover some crystals which turn a couple of crewmen into raving lunatics, and there's some half-hearted running around, punctuated with one of the most brainless action scenes to ever grace the silver screen. Gail gets pushed down by an insane teammate, inexplicably getting her foot trapped beneath a board. Her suit is running low on power and the captain tries in vain to convince her to patch two wires together on her wrist to restore power to her suit and thereby save her life. Let's play Choose Your Own Adventure: your foot is trapped beneath a board, your suit's low on power, and your captain is trying to convince you to patch two wires together on your wrist to restore power to your suit and thereby save your life. DO YOU:

1) Patch the two wires together, restoring power to your suit;
2) Stand up, thus freeing your foot from the troublesome board;

3) Whine like a little bitch that 1) and 2) are both just too hard, rip a tube out of your suit and jam it down your throat, and attempt to saw your foot off with a chainsaw?