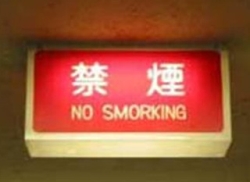 In my freshman German class in college, we had to do an oral presentation on something we saw every day. I picked my cat, Suzy. I was trying to explain that her tail was very short. Apparently, I should have picked a different topic, because when I said "eine kleine schwanz" my teacher cracked the hell up and gently told me that I just said my cat had a small penis. The dictionary told me it meant "tail!"

Well, I guess it does.

My friend told me a story about when he was living in Rome. He and some friends were looking for some extra money so they tried to sit by a fountain and beg. People would come up, read the sign they had written, and would laugh as they were walking away.

In Russian, slusha means listen (or hear, but I use it like listen to me) and shluha means whore. That's fun when I mess that up.

Also, I was trying to get my girlfriend's dad to calm down one day and I meant to say uspakoisa (calm down) but for some reason zat knes (shut up) came out. That wasn't as bad as it could have been, because the first thing that popped into my head was zaibala, but I thought, no, that's not it... oh yeah, zat knes.

I was told that zaibala means leave me alone but apparently, literally, it means something like stop fucking me.

My very well endowed friend was talking to the Japanese teacher one day. Instead of saying that she was full "onaka ga ippai," she said "onaka ga oppai." She kind of said "Stomach, big tits." Which was cool because she was HUGE.

Over in Japan, I saw a sign on a building with two numbers. One was for the phone. The other was for the fucks. Now this was in a nice area, so I'm assuming they meant "fax," but that was awesome.

When I was taking Spanish in high school I had to do a restaurant themed skit with my friends. I had to order "something spicy" and for some reason I forgot what the word for "dish" (poultry dish etc.) was, and went with the first similar sounding word that popped up from memory. After laughing for five minutes or so the teacher told me that asking for a "hombre calliente" (hot guy) is generally considered inappropriate at most cafes.