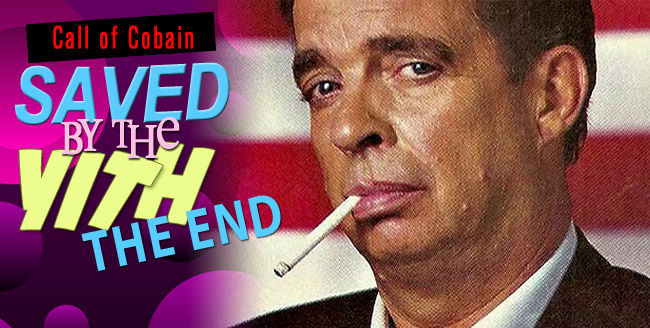 Zack: In last week's installment, which you should probably just read, Eazy E summoned a Servitor of the Outer Gods named Station which the gang used to escape the FBI and police. They then smuggled Station under a tarp into Janet Jackson's dressing room at the presidential debate being held at Mann's Chinese Theatre. Cobain, Left Eye and E then busted into Morton Downey Junior's dressing room with the intention of confronting him about his involvement in a radiation cult.

Steve: We overheard him saying something about a mad Arab seeking the fungi and nuking cities. Also Morton Downey had bikini babes with Uzis.

Steve: Does Left Eye have her flamethrower?

Zack: No, you had to ditch most of your weapons to sneak backstage at the debate. Left Eye is unarmed, Eazy E has a single Tech-9 and Kurt has his concealed tonfas. Also if you try to pull a gun you have a feeling you're going to get blasted by Uzis.

Steve: Getting shot to death is a super lame way to go in Cthulhu. E will keep his hand off his Tech-9.

Zack: "Don't you get it?" says Morton Downey. "The time when your simplistic killing might have worked has long passed. I am the leader of a movement. If you kill me you will only ensure that whoever takes my place will win the election."

Steve: Kurt is going to be like, "Whoa, whoa, cool down, buddy. We're not here to kill you, we're here because we want some answers."

Zack: Morton Downy cocks his head like he doesn't believe you. He gestures with the big revolver and says, "Ask your question before I splatter your brain pods."

Zack: He's not a robot where you can ask him a question that causes his logic circuits to melt down.

Steve: Okay, okay, Left Eye will ask, "Who is the 'mad Arab' we heard you talking about?"