Just as a quick sidebar can you guys even imagine what it would be like if Superman could alter his Kryptonian DNA & become a Super-Sayian? His power would be ten thousand times the power of any creature that ever existed and his every breath would shake the cosmos and electric fire would spew from all objects, possibly destroying man's ability to think and feel anything except overwhelming Awe. All men and women of the earth would bow before him and he would glow so brightly that the sun would turn and hide his face, a creature of purest Power and Grace, a being of Ultimate Authority who we would praise and love.

Anyways, on with the debate. Sorry about the derail.

No, that's what Logan's Key deals with. As soon as "Fight!" is yelled, a time-travelling Superman will have already placed a mountain or distracting woman in front of Goku, giving Superman just enough time to travel through time to distract or block Goku's first attack. Once Superman has time-travelled it's a simple matter to re-arrange events in whatever manner so as to make Goku's victory impossible. Just because it's debilitating to your argument doesn't mean you shouldn't take it seriously. 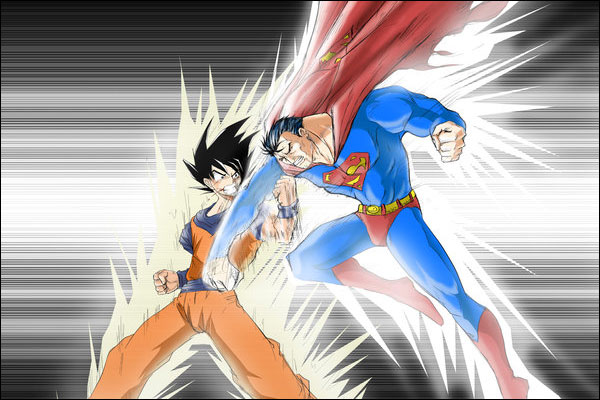 But Superman is not the only person in this fight capable of traveling through time. Goku can travel through time, as well.

I also don't think it's wise to rule out the fact that in the Dragonverse, time traveling cannot change the present or past. All it does is let you visit alternate timelines.

Goku may also be able to travel through time, but Superman's superior intelligence means he could easily trick Goku and succeed in creating a superior trap, likely exploiting Goku's own hubris.

I don't see why the Dragonverse is unique in the respect that time travel doesn't "change" the present or past - to say "change" would be to imply that it wasn't how it was all intended to work itself out from the beginning.

The problem with Logan's Key is that it assumes that the prisoners will ever walk out of prison to start with. A Superman who's been crushed into pulp will never be able to use a temporal shift to undo his killing.

I'd also like to point out that by leaning so heavily on preparatory time travel you implicitly concede that Superman cannot win a fight with Goku - instead, he has to use flight and misdirection to attempt to prevent Goku from fighting at all.

What is a fight but an attempt to achieve victory over another? At what point does something have too much strategy to count as a conflict?

peenworm is right. Strategy is an inherent part of all combat! The Mystery of Chessboxin' (

) by the Wu-Tang Clan teaches us that "you must think first, before you move."

Doesn't Superman derive his strength from the Earth's yellow sun? Would he still retain all of his abilities if this fight were taking place somewhere other than Earth, like say, an uninhabited planet? The setting of this fight seems to be salient to the argument.

Indeed, would anyone more versed in the Superman canon put the yellow sun issue to rest? I am aware that the writers added the sun element make the destruction of Krypton feasible, and I am unsure whether at the time of the Silver Age his powers were inherent or derived from the Sun. It is an important question: it suggests that, to win, Goku merely had to utilise his Instant Transmission technique to transport them away from Superman's power source. Allegations of this not constituting a 'real fight' aside, I feel that this is an issue that must be solved for the sake of the Flawless Debate. 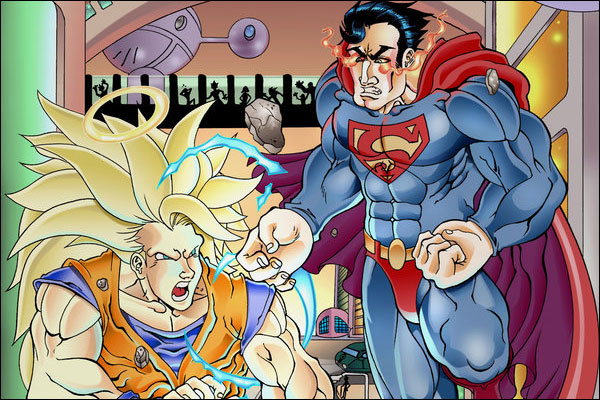 While extended time under a red sun would in fact drain Superman's powers, I feel that Superman's weaknesses are generally not an issue in a Superman/Goku fight for two reasons. One: Goku, as noted, is kind of dumb and likely would be unable to discover them. Two: Goku has repeatedly shown that he's willing to handicap himself or heal or save his foes simply to give himself a greater challenge. If he was willing to let Freeza finish transforming into his final form simply to fight him at his strongest, he's unlikely to choose to depower Superman even if he were to discover a method to do so.

Conversely, though, what would motivate Superman to fight Goku? To my knowledge, Superman hasn't generally shown much interest in tournament-style "let's find out who's strongest" fights. He fights to protect earth, justice, etc. This gets back to my earlier point -- Goku probably wouldn't take advantage of superman's weaknesses, but what's motivating Superman to fight back? Supes would probably be more concerned about possible collateral damage from their fight than he would be motivated to actually beat Goku. I'm having a hard time coming up with a scenario where Superman doesn't deliberately throw the fight just to let Goku have his victory so Supes can go back to doing important things like fighting the Skrells or what have you.

As has been noted several times, the Superman we are using for this Debate is from the silver age comics, and as such will fight anyone or anything for no reason at all, or possibly because they stole Jimmy Olson's favorite pen on accident and if he doesn't get it back in 24 hours Jimmy will become a werewolf... FOREVER!


Saying that Superman wouldn't fight because it isn't in his character is no better than Ferrinus arguing that Goku would have to win because "thats his character" - a transparent attempt to avoid the actual issue. I don't know what you think you have to gain by muddying the waters till people lose focus on the actual issue of the Debate, but it isn't at all called for. The topic is Superman Vs. Goku, not if Superman is a way nicer dude than Goku. Either address the actual topic or leave.

I don't think it's legitimate to define the debate that narrowly. The initial question was rather broad, and asked who would win in a fight.

Actually, if you look closely -

Who do you think would win in a fight, Goku or Superman?

the question isn't who would win in a fight, but who one thinks would win in a fight. Personally I think Goku would. Unless anyone can provide good reason to believe I don't have access to my own subjective states, I think this debate is perfectly over.

Well, I think this topic of Debate is finished. As I brought the last topic up, I Pass this time around and leave the floor open to another. Thank you for joining me guys.