I believe that much of this discussion has ignored a necessary reason why goku would win.

It's been said that Goku is defined as The Guy Who Wins Fights, which casts this whole line of inquiry academic. Goku would thereby win by definition, regardless of the apparent outcome. It is only our imperfections that would cause us to see an apparent defeat which was actually a True Victory.

"Victory" is in essense defined by "what Goku does in a fight."

This poses some problems that arise when considering questions like "who would win - Goku or Batman" since prepared is by definition what Batman is. It also poses other problems pertaining to Superman because while Superman's victory is not an intrinsic quality, Doing What's Best is. The best thing is what superman does, by definition.

I actually believe that if Superman and Goku fought, then they would fight forever because their defenses are much greater than their offensive capabilities. Consider two marbles in a bowl. If you roll the marbles up the slope of the bowl, then you impart potential energy to the balls. This is analogous to the energy within Superman and Goku, which grants them superhuman strength and the ability to fire energy beams. If you then release the balls, they will collide with each other and then go back up the slope. But since energy is conserved, one ball will never go higher than twice the height the balls were at originally. The height of the bowl represents the defensive capabilities of Goku and Superman. If the combined potential energies of Goku and Superman do not exceed the potential energy at the top of the bowl, then neither can be defeated by the other. 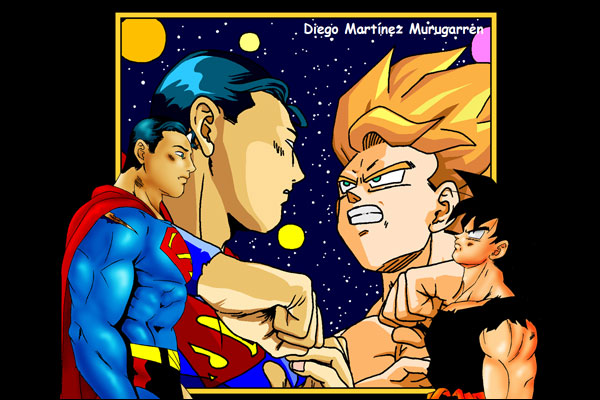 This, I feel, is untrue. At their core both characters have similar traits - flight, super strength and durability, energy attacks - but both are their own characters. Goku is dumb but is a natural fighter and as a saiyan will get stronger and stronger the longer the fight goes on. Superman, by contrast, has a superhuman mind but is generally not considered as good a martial artist as many other DC characters, but has a nearly limitless amount of superpowers and gadgets. Also, Goku can teleport and Superman can time travel. So as I hope you can see, the fight will end decisively. Either it lasts long enough for Goku to "power up" and gain greater insight into his opponent, or Superman will use his vast toolbag to take Goku down.

The question becomes why they would ever fight at all. I know the standard theological explanation is that there is some misunderstanding wherein at least one party thinks the other villainous, but given the pacifism of Goku and the general even temper of Superman is such a matchup even possible within the grounds of enlightened reason?

Goku would want to fight Superman for no other reason than because he's strong, that's Goku's nature. Silver age Superman just did whatever the fuck he wanted, its not hard to imagine him deciding to fight Goku on a whim. You can set up all sorts of reasons the two would have to fight, but its well within the characters as written to fight "just because."

Suppose Goku and Superman are both trapped by magic in an alternate dimension. The dimension contains breatheable air and a ground plane and its inhabitants are, by magical fiat, kept constantly satiated and unaging. Both Goku and Superman are informed by whatever godlike being transposed them that they will only be freed once one defeats (read, knocks out or kills) the other in an honest fight. More magic is used to read each combatant's mind: if it turns out they are not fighting to their full capacity or otherwise trying to cheat, the scenario instantly resets. Any lasting harm caused by the fight up to and including death is magically repaired. Only a minute passes in the real world no matter how long the fight takes.

The dimension probably extends endlessly in all dimensions and has an earthlike ground plane which may or may not be indestructible down past a certain point.

Also late, but Superman's ostensible ability to travel through time is not really relevant to the debate. Time travel isn't one of Superman's powers the same way that heat vision is - it's just what Superman's writing team thought the logical consequence of going incredibly fast was. If Goku were written in the Silver Age DC comics universe then he could travel through time just as easily as Superman, for the same reason that if Superman were to die in the Dragon Ball Z universe he would appear in heaven with a little halo floating over his head.

It's also untrue to say that Superman has countless powers and devices. He actually has only a few discrete powers, and he does not walk around with a utility belt of superscience inventions. He's theoretically capable of designing and building all manner of things, sure, but while he can do it infallibly and at incredible speed he can't actually do it instantly. Indeed, since Superman's speed certainly does not significantly outstrip Goku's, there's no real way that Superman could bring his ability to construct devices into bear, for the same reason that a mortal scientist confronted by a mortal martial artist can't win the confrontation by sitting down at a workbench and fabricating a revolver from raw materials.

With regards to your positing of a "godlike being" creating a scenario within which Goku and Superman would battle, you simply theorizing that a being or group of beings exists that is capable of putting all this together? What is your basis for that theorization?

I am reminded here of the Hebrew word

or mika-il, which, translated roughly, reads Who is like Goku?

I'm just trying to contrive a scenario in which both characters would be willing and able to fight the other without any restraint. This means getting rid of both the pressing need to protect the world and the fear of seriously harming bystanders or one's opponent. I'm sure a more believable situation than mine could be woven by someone who has devoted even more thought to the issue* but the point is to show that "They'd never fight each other!!!" isn't relevant to the question.

Also I've come under some criticism for suggesting that we should consider time travel to be irrelevant. I'm not taking time travel away, merely pointing out that nothing really stops Goku from doing it too if the only hurdle to leap is "can you go really fast?" Goku goes really fast, too.

Goku is presented as traveling with great velocity but not velocity that even resembles Superman's capacity to travel at the greater-than-light-speed which enables time travel, which you would know if you had your opinions grounded in the facts instead of absurd head-in-the-clouds theorizing.

Ahem! This is incorrect. In fact, DBZ 1:2 (Saga 1, Episode 2) clearly demonstrates a Saiyan moving at greater than light speed. And this is in the very beginning of the Saiyan Saga! It is ludicrous to think that Goku could not far outstrip Raditz, considering the exponential track his own power level takes throughout the series. 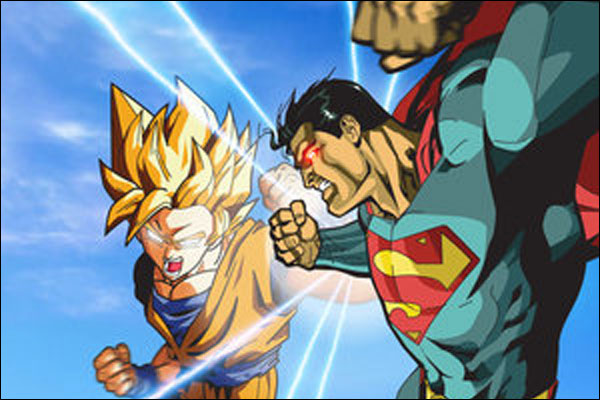 Goatstein is still substantively correct. If we just start randomly mashing powersets together like this you might as well say Superman would win because he'd be able to use his ki to do dragonball martial arts in the dragonball world, it's the pointless muddying of the waters that you so love to fall back on when it becomes clear that you've lost a debate, and I won't engage it.

Well yes, if Superman were to travel to the Gokuverse and submit to the training of one of a thousand different characters he would no doubt learn to master his ki and fire energy blasts from his hands in short order. What I'm saying is that these background details shouldn't affect the debate at hand - Superman is a guy who flies real fast, and lives in a world in which flying real fast is sufficient to time travel. The former matters to a fair fight, the latter doesn't, any more than the fact that Goku is a guy who lives in a world in which a series of short errands grants the ability to briefly but permanently rewrite reality.

I feel like this debate may be developing flaws. Please try and maintain the standards that we have set so far.