We must really begin to gauge the relative speeds here in order to remain Flawless. I can demonstrate that for a planet to be Earth-like a moon of a particular size must be no less than a particular distance away - this can give us a minimal speed for the Makankkosappo, which, I believe, will still come out to be above the speed of light.

For starters, we must realize that the Dragonball Earth's moon must be at the very least as massive as our planet Mars - there is clearly some sort of atmosphere there, and it is apparently even breathable to Boss Rabbit. Mars is if anything a bit low-end of an estimate for mass, but I think it should suffice. Mars is roughly 8 times the mass of the Earth's moon. Now, on Earth, tides vary but reach a height of 5-6 feet a good portion of the time. Should the Dragonball moon be as close to the Dragonball Earth as our moon is to our Earth, we would see 45-foot walls of water crashing across the coastal cities, ruining them beyond all recognition. As Dragonball has multiple coastal cities, and given the usual geography of beaches, it seems plausible to posit that Dragonball's more massive moon must be at least 5 times as far from the Dragonball Earth. This gives us a distance of at least 6 light-seconds - the SBC did not take 6 seconds to reach the moon.

This is only valid if we believe the Moon is made of rock or matter of a similar density--via Newton's Law of Universal Gravity if the Moon were greatly compressed through some unknown mechanism, the reduced radius would translate into increased surface gravity and thus a thicker atmosphere. 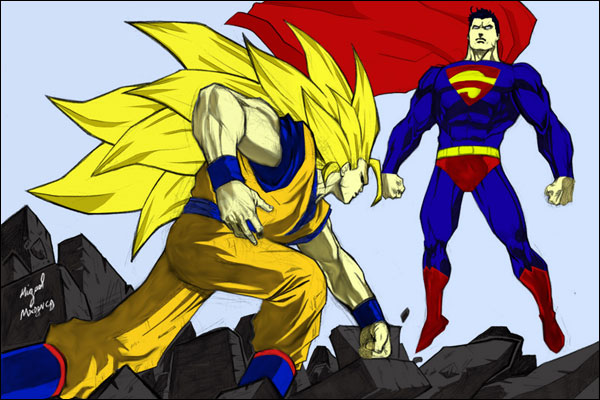 Our best observations of the moon in Dragonball indicate that it is made of rock! I don't see any point in hypothesizing some sort of metal construct-moon with a shell of regolith when "A moon like ours but bigger" fits just as well!

One important implication of Superman's ability to time travel has not yet been considered - he would have ample opportunity to become a martial arts master. Imagine if he mastered the Kao-Ken technique. He would be unbeatable.

I don't think Superman's mastery of martial arts would grow at the same rate as Goku's does since Saiyans are pretty much bred for fighting and Kryptonians aren't anything special on that front. Anyway, Kaio-Ken is a poor substitute for any grade of Super-Saiyan.

Superman is super-smart, and so would presumably be able to learn much faster then Goku (at least if he were in the same solar system as a yellow sun. It's a safe assumption that there is a yellow son in the afterlife.) Regardless, he has infinite time to learn.

Learning chemistry isn't the same as learning martial arts. It's a very big stretch to assume that, well, anyone has Goku beat when it comes to expanding one's capabilities with kung fu.

Furthermore, I do not think the second premise is a safe assumption at all.

Well, I disagree, but the point is moot since Superman has infinite time, as I said.

Goku, before he had any martial arts training, was slightly stronger then a base human. The only technique that Superman cannot learn that Goku knows is how to reach the Super-Sayian state (though even this is debatable since Superman could use his super-science to change his DNA). Superman, if he were properly trained, would be much more powerful then Goku. This is indisputable.

Superman would only need to splice a small amount of Sayian DNA into his genetic code in order to reach the Super-Sayian state. This shouldn't be hard since Kryptonians and Sayians are both genetically close enough to humans to produce fertile young, and Superman is a super-scientist.

How often did Superman use his amazing powers of traveling through time? I'm quite sure that he's been beaten several times by various villians, how come he never went back in time then? It wasn't a staple of his to just do a superpirruette and go back in time everytime he lost a fight. He just figured out another way to win. SO I submit his "timetravel" power should be stricken in the interest of this fight.

The version of Superman used for this fight is the silver age version, and silver age Superman in his comics would quite frequently time travel with little fanfare or explanation. When fighting Atlas, who beats superman because he has all the powers of the gods, for example, Superman prepares for the rematch by going back in time and talking to the gods and seeing whats up and why can that dick Atlas use their powers. As Superboy, Superman lead the Legion of Superheroes which any casual comics fan can tell you is in the far future. Time travel was both common for the character of the era, and a way he frequently prepared for fights or recruited aid. It is neither out of character or far-fetched for him to use it in a fight with a foe on the level of Goku.

Have we established the rules under which time travel functions in this theoretical framework? If the space-time continuum is structured as it is in Dragonworld, Superman can travel back in time as much as he likes, but he will invariably return to his original, un-altered timeline (as Trunks discovered to his dismay).

Trunks and Superman are using different methods to travel through time, and we've seen that Superman's method allows him to actually change his timeline. There's no reason to think the Z-universe works under different rules.

Regardless, if he's just using timetravel to learn the techniques he needs to defeat Goku, it doesn't matter whether he changes his timeline or not.

It does if the only timeline he can return to is the one where Goku has defeated him. Even if he reappears, spoiling for a rematch, he's already lost!

But if he returns with the ability to use the Kao-Ken, or even worse, Super-Sayian technique, then he'll easily be able to defeat Goku. For instance, Trunks was able to use the abilities he learned in the Z-Warrior's timeline to defeat the Androids of his native timeline. 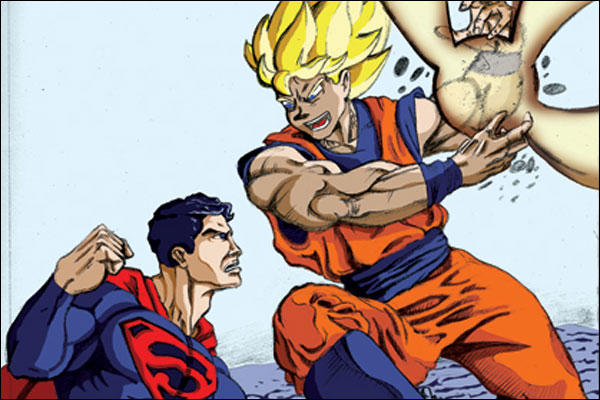 The very idea that Goku could stop Superman before he went back in time is laughable on the face of it; as proof I submit the Logan's Key paradox.

To those of you unfamiliar with Logan's Key it's the relatively straightforward fact that anyone with access to time travel capabilities cannot be surprised or caught off-guard by events as they unfold. Consider two delinquent San Dimas High School students sitting in a jail cell who do not, at that moment, have access to a time machine (but have access to one, in general). Considering their plight, they conclude the solution to their problem is to travel through time once they have escaped from their cell, to place the key to the cell within reach (and, having so escaped, remind themselves to place the key there later). Indeed, any number of problems can be solved in this manner, from ringing phones to nosy police captains.

Given the fact that Superman's time-travelling ability is well established (and Goku's is not), then it would be a simple matter for Superman to perform any amount of time travel, while remembering to arrange events in such a way as to prevent Goku from preventing him from travelling through time. This application of the Brown's Vest Principle is so simple I am astonished that I am the first to post it here.

Additionally, just to pre-empt the inevitable counter-argument that Goku i s also capable of time travel therefore the two are evenly matched, Superman's unbelievable intellect and limitless amount of time would allow him to craft a scenario in which even Goku's use of time travel would still result in an inevitable defeat for Goku ("Judgement Day is inevitable" - Terminator 3).

I'm saying that when you put Goku and Superman together in an arena and yell "fight!" Superman can try to start spinning or flying fast or whatever, but he'll find that Goku is as fast or faster and just won't get anywhere before he starts getting pounded into the dirt.

Ferrinus, if you're not even going to read the thread there's no point in having this discussion. This issue has already been dealt with.