I will need to choose option C in this debate: "Neither will overpower the other overwhelmingly enough to predict". They essentially have the same attributes and abilities (As far as I can tell from Wikipedia), and it would come down to a coin-flip as to who would win. It would probably depend on outside circumstances, like which one of them has a lover who is in danger. I know little to nothing about Goku.

Thats not how a debate works man you gotta choose one of the sides.

You can't be like RESOLVED: There should be capital punishment but only, like, if the dude is a really bad guy I guess? gosh...

It depends entirely on whether you consider Goku's ki blasts 'magic'.

Goku could throw a spirit bomb at Superman and Superman wouldn't know how to deflect it. 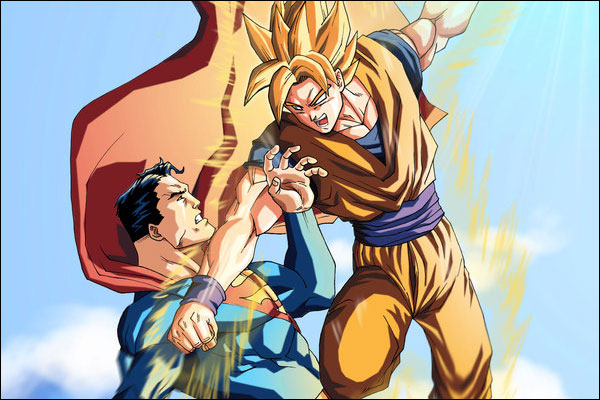 Well the reasons why Superman would win are clear: Goku and Superman are both strong, fast, can fly, etc. but I'm not interested in arguing which are the best at any of these. All that matters is that Superman can keep up with Goku for a while, which I don't feel is exactly going out on a limb. With that established, Superman's victory is clear. As this is the silver age Superman, he has access to an insane number of superpowers and super science, while Goku remains limited to physical attacks and Ki energy attacks. In short, if Goku is not strong enough to defeat Superman instantly, it follows that Superman will overwhelm Goku with his fantastic and nearly limitless strange powers. Also, Superman has been established as being able to travel through time, so even if he came to the brink of defeat, he could simply rewind the fight back to the start.

Goku fact: Goku can take power from every living thing in the universe and put into a ball and throw it at Superman. Goku will win because he can throw a ball of infinite energy at superman, which superman cannot do.

I think Goku needs to request aid from every living thing, though, right? Theoretically, if every living thing knew about Superman and preferred him, he might not be able to conjure up a "Spirit Bomb" to throw at Superman, which limits his options.

Besides, the "Spirit Bomb" attack of Goku's is established as not working on those pure of heart, so would fail against superman. In addition, it takes Goku a long amount of time to charge it. Against a foe as deadly as Superman, it would be unlikely that he would get a chance to fully charge it.

In the interest of Flawless Debate, I would have to concede that Superman's ability to go back in time makes him effectively invincible, which Goku does not have the ability to accomplish, and thus Superman would win the fight. I lose. Bravo.

It's possible Goku can also go back in time. Note that Superman's time traveling ability is based on his speed, but Goku has been shown (most notably in the Frieza Saga) to be able to move so fast as to appear to be teleporting. Given this show of speed, Goku can very likely travel through time. Time travel technology is also available in the Dragonball Z universe, as evidenced by the appearance of Trunks.

yes but Superman's method of time travel is far superior because it also includes defensive elements. Consider that while superman flies backwards around the planet to go back in time in the film Superman, it is not the only way silver age Superman can time travel. He could, for example, simply spin counterclockwise to first create a giant tornado, and then travel backwards in time. (he would spin clockwise to go forwards) A method like this would both be faster and stop Goku from reaching him in time to stop the travel (due to the tornado.) 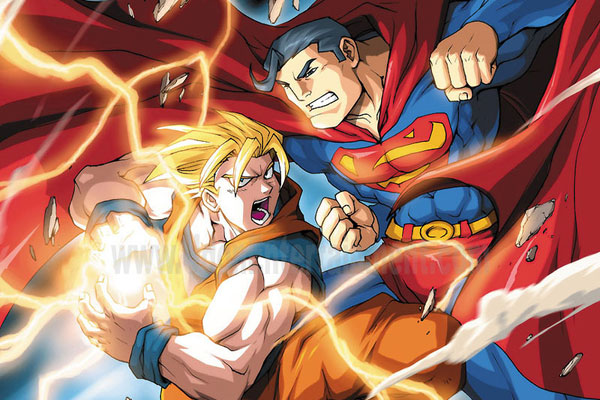 Consider: Superman is flying or spinning around the Earth building up speed to go back in time, then Goku uses Instant Transmission and Superman flies right into his fist. Goku's in-combat speed is so much faster than Superman he wouldn't give him a chance for any of that fancy foolishness. It's pretty hard to do anything when when the Strongest Fighter in the Universe is hitting you a hundred times a second.

though there is controversy over whether Goku actually teleports, or if it is an apparent teleportation that is actually light-speed travel.

There is no such controversy. It is established in every canonical source that Goku's "Shunkanidou" technique is actually teleportation. For example (though certainly not the only one!), when King Cold and his cyborg son Frieza arrive on Earth, Goku teleports back to Earth through the vacuum of space. We know that Saiyans cannot survive in space (anime filler aside), so Goku could not have traveled through it. He must instead have teleported.