I came back from a couple of weeks on holiday when I was about 10, opened up a jar of honey. There were ants dissolving in it. A trail of them stuck to the side, not moving, and half-melted ones inside.

This isn't exactly on the mishap topic of the thread, but it reminded me that I was going to do an article about really nasty foods many moons ago. I decided not to do the article because I bet most of this shit was on that TV show with the dude that flies everywhere and eats gross stuff. I still have my notes. Here are the foods that struck me as the most digusting:

Escamoles are the larvae of ants of the genus Liometopum, harvested from the roots of the agave (tequila) or maguey (mezcal) plant in Mexico.

http://en.wikipedia.org/wiki/Casu_marzu also known as Maggot Cheese. Eaten while the maggots are alive, you are eating a slurry of rotten cheese and their shit.

The larvae have powerful mouthhooks which can lacerate stomach linings or intestinal walls as the maggots attempt to bore through internal organs.

http://en.wikipedia.org/wiki/Ortolan_Bunting A grotesque delicacy of tortured bird, eaten whole. It is illegal in France, but still eaten. And how!

For centuries, a rite of passage for French gourmets has been the eating of the Ortolan. These tiny birds-captured alive, force-fed, then drowned in Armagnac-were roasted whole and eaten that way, bones and all, while the diner draped his head with a linen napkin to preserve the precious aromas and, some believe, to hide from God.

A favorite topic of bug talk on the forums, this evil mind-controlling fungus is a traditional ingredient in Chinese medicine and food.

The nastiest raw meat dish you have ever seen. It's a favorite of Ethiopian food but is so grotesque it rarely makes the menu in America. When served it usually comes with a healthy portion of raw fat (not rendered into lard or anything) since the meat is so tough and difficult to chew.

Surprised you didn't mention balut...I think Zimmern ate it on his show once. My wife is half-Filipino and tells me about how her grandfather loved that stuff. Her cousin tried it and immediately spit it out because the little chicken feet combined with the taste grossed him out.

For those unwilling to click a link: Balut is a chicken or duck egg that is allowed to develop into a two-week-old embryo. The egg is then boiled (usually) and the embryo is eaten with salt or vinegar. Some people prefer to eat it raw. 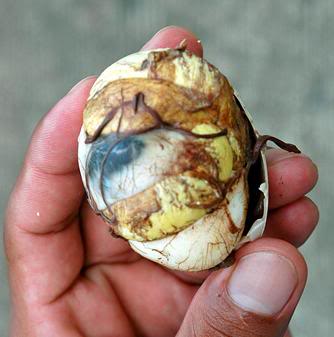 One time my mom made lemon-pepper chicken (basically, a recipe consisting of chicken breast and lemon pepper seasoning) with rice and some green beans as the sides.
Well, I was minding my 11 year old business, eating, when I noticed a strange reddish garnish on the side of my chicken. I didn't pay it any mind because I was watching television.
Until I flipped it over on my plate and discovered I had eaten 4 legs off of a fried daddy long legs spider by accident... that somehow managed to slip in with the chicken during cooking.

Needless to say, I triple check anything I eat these days.

I've told this story before, but I was at McDonald's one time, and I ordered a McChicken. I was about halfway through when I bit into a pus pocket. It burst in my mouth, and immediately filled my mouth with the most vile and infected tasting liquid ever. I took a napkin and began trying to scrape the taste out of my mouth. It was putrid. I will NEVER eat one again.