Having served in the Navy I've got plenty of these stories. Luckily you get so hungry that you can basically eat anything and not care though.

During taco/fajita night I went for the chicken, and instead of putting the whole thing together in the mess line and holding everyone up I would just get all my parts and put a taco salad together by mixing them all together at the table. It's a good thing I did this because when I was mixing I found the top part of the thick plastic bag which the chicken came in, still held together by a sturdy metal clip perfectly hidden inside the meat mash. I guess they had just sliced the top part off to open the bag quickly and it fell in OOPS. I shouted to the head cook, "Hey CS1 what the fuck is this shit?!" and he just said, "Oh those mother fuckers, give me that."

Getting served roast beef with a rainbow gloss on it so thick it could be rainbow trout.

The menu lists "Stuffed White Fish." When I asked the cook what it was stuffed with he just said, "Stuff" and put it on my plate with the look of a zombie void of compassion.

Also it was tons of fun to do store on loads where you get to see all the food you'll be eating before it could be "prepared." Lettuce that has literally turned black and melted, strawberries covered in bugs that have died from heat exposure, shriveled black potatoes.

I never thought I would ever voluntarily go three days without eating a single meal. That's what I get for joining the Amphib Navy

I used to have a budgerigar who loved popcorn, and even just liked to frolic in it. So, if I made popcorn, I'd just spread a couple handfuls of it around on the counter and let him have his fun, while also enjoying the popcorn, myself. Well, one day, I grabbed a few kernels and ate them, only to realize that something had felt cold and wet. I wiped my mouth to find a green and white smear on my hand. By this time, I had already swallowed the popcorn and bird crap medley, but tried scrubbing my face and brushing my teeth like crazy the rest of the day. Thankfully, I never got sick from it, but I was damn sure I looked before I ate from then on.

Sooooo, back in the day (10 years-old or so) I thought I was sneaky motherfucker and snuck an entire BOX of Oreos downstairs away from the protective eyes of my parents.

Had them down there for...oh I don't know, a week or two and everything was fine. One faithful time though I grabbed that box and took out a few Oreos and without looking just popped them on in my mouth. Ate them, thought they tasted a little funny but didn't think much of it. Went back in for the 3rd Oreo, pulled it out, looked at it...it was literally crawling with ants. And, that's when I started feeling them crawling around the inside of my mouth too.

Only time I've ever puked from 'eating' something...and rightfully so I think. Didn't stop me eating Oreos though

I used to love the shit out of Cinnamon Toast Crunch as a kid. I could eat that shit almost every day. Well, one day on a hot texas afternoon, I figured I would just get some cereal for lunch. I go through the motions of snagging a bowl, spoon, the milk, and the cereal. Pour myself a delicious bowl of the stuff, and run off to eat it while watching cartoons. I still don't know why, but after 3-4 bites, I had this urge to look down at my next bite. And there, on my spoon in between the big ol' cinnamon squares and the milk, was a little grey worm about half an inch long, wriggling slowly back and forth. It looked like it had small ridges on its sides, but since it was something moving in my food, I didn't bother looking at it too long...defense mechanism, you know?

I looked into the bowl and saw a few others, and then ran to look into the clear bag of cereal. Little brown pods hung along the insides. To this day, I have not willingly bought CTC at all.

You know those deli-sandwich meats that come in little packets? Sometimes when I'm hungry and I'm too lazy to cook anything (and some half-retarded idea that I could work on my calorie intake by just taking in some low calorie protein instead of a big meal) I would just eat those things straight out of the packet. Chicken and turkey are my favorites. After grabbing a chicken packet, I took a bite, and I noticed it tasted a little sour. I swallowed that bite

, but then I inspected the meat afterward. Well hello little cauliflower shaped white spots all over the meat! It was simply expired. I was amazed I didn't get sick, but that one bite sure gave me some bad gas.

There was a time I was eating a bag of half eaten cheetos that was in our pantry. As I got closer to the bottom of the bag, I noticed they were starting to get wet and a tad soggy. I then noticed an odd but familiar sour taste to them. I look into the bag, and towards the bottom sat a few hamburger pickle slices.

While we're discussing exotic dishes from far away countries, I had the "privilege" to try guinea pig. Peruvians take the furry little guys, shave them, gut them and then roast them.

While the prospect of eating a rodent is not a horror story (not like tumors and pustules anyways), the sight of gnarled claws, yellowed teeth and sunken eye sockets certainly is. Especially for my 12 year old self. They taste like a leather handbag that's dripping in fatty oils. Same tough texture, same leathery smell.

But the family hosting us was gracious enough to make us a whole meal, so I trooped my way through the rubbery meat and quietly vowed never to eat one again. 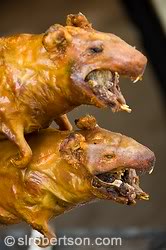 While working in the meat department of a natural foods market, a woman came in asking our seafood guys if they still had any of the swordfish with almonds left. That was a sight I will never forget when one of the guys told her that they have never carried the product and it sounded like she had eaten a swordfish steak with tumors in it. So if any foodies decide they want to take their next meal to the extreme, word is that swordfish tumors taste like almonds.