My Internet Connection is Sad 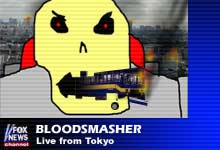 BLOODSMASHER dines on a bus during live TV.The discussion topic for the evening was whether or not the US should continue to develop the Osprey VTOL aircraft despite the fact that anybody who has ever tried to fly one has died. I managed to catch the tail end of the discussion and it went a little something like this.

Hannity: "I agree with whatever leading Republicans say."

Colmes: "You're wrong! I agree with whatever leading Democrats say, but the show is set up to make me look like a moron, so it doesn't matter. What about you BLOODSMASHER?"

Hannity: "I think the Osprey is vital to the economy and I think the people know it in Washington D.C."

Then BLOODSMASHER drove off the screen and I heard the sound of explosions. This got me thinking about a few different things. First and foremost in my mind, I thought about how happy I was because I do not live in Washington D.C. After I celebrated this, I wondered what some of the other stars of the NSRDDL might be up to when not battling it out with their fellow robots. This required intensive research, and since my interweb connection was down, I decided to phone the library. You might not know this, but you can call a library and ask them any question and they are required by law to give you the correct answer. If you ask them a question about the future and they turn out to be wrong, they go to jail, but that's the risk you take by choosing a career in librarianism. But I digress; I asked them about a few of my favorite robots and got some great answers! Where are they now? Well here they are, jerk!

The Molestinator: Everyone's favorite star of the NSRDDL, the loveable and faulty Molestinator, coaches a midnight basketball league in Los Angeles. He is part of a group called "Big Male Robots, Big Female Robots" that provides robotic mentor figures for kids and organizes local programs like the basketball league to help keep them off the streets. I guess the streets there are not safe; the kids might enjoy laying on them too much and never get up to mow the lawn or something. The Molestinator's team is known as the "HONK HONK! Drugs Are Bad Team," and I actually managed to get the phone number of one of their key outfielders. Todd Jordan, age 11, had this to say about The Molestinator:

"Last year he was the best! We were in a really big game and we were down by 4 points and he just kept shrieking and driving in circles shooting sparks at us until we went out there and gave it 110%. After we won we celebrated by dumping Gatorade on him, which made him catch fire somehow. I'm not really sure, that still confuses me. Anyway, this season he is a little different, he just sits in the corner saying 'HONK HONK' while pieces fall off of him. If any of us go near him his bowtie starts spinning and his eyes glow red. He's mean. Also, he smells like burning carrots."

Brick Launcher Cattle Carrier: Converted from a cattle carrier into a brick launching robotic warrior, BLCC is one of the super stars of the West Texas division of the The Non-Sissy Robot Demolition Derby League. When he's not hurling bricks from his cattle carrier brick launcher at opponents, he likes to spend his time helping the elderly. I tracked him down at the Sunshine Meadows Home for the Near Dead and asked him how he helps out. When I say "I", I mean that the librarian I called tracked him down and asked him out of fear of jail time. Here's what he had to say:

"Helping the elderly is what really makes my existence fulfilling. Sure, I enjoy launching my brick children at the enemy robots, but it isn't the same as launching brick babies at the elderly. I remember Mrs. Clovis came up to me just this morning and asked if I would help her water her plants. Being a caring robot I of course did this for her, and then fired my beloved brick infants at her head and chest until she resembled a pile of ground beef. Lucky for me, my creators at Team Glory Hole know what I'm all about and installed a meat scoop on my front end, making brick victim retrieval as easy as 1, 2, 3! MY BABIES LOVE TO FLY. CAN I COME TO YOUR HOUSE AND LAUNCH ONE AT YOU? PLEASE?"

Amos: Everyone loves Amos! Second in fan-popularity only to the Molestinator, Amos is - as I'm sure you already know - a robotic hat that Team Due North bolted onto the head of a penguin they found wandering the glaciers of Toronto with a pair of red slacks around its ankles. By using painful electric shocks to guide the penguin, Amos can deceive foes into believing the penguin is actually his body, causing them to ignore the hat on its head. Amos attacks when they least suspect it, usually by causing the penguin to catch on fire and run around squawking in agony while trying to slide into an ocean that is thousands of miles away. So what does the legendary Amos do with his down time? To answer this, the helpful librarian type read an excerpt from Entertainment Weekly to me over the phone.

"NSRDDL robotic grappler Amos is rumored to be starring in the latest installment of the blockbuster "Police Academy" franchise, "Police Academy 8: Operation Top Hat." According to insider sources, the plot revolves around Tackleberry being assigned to guard the Commandant's coat room. Unbeknownst to Tackleberry, the nefarious Lieutenant Mauser replaced the Commandant's prized top hat with an evil-mind controlling robot, which then takes over Tackleberry in an attempt to reveal the rest of the force as buffoons. Rest assured, action, hilarity and high drama are all going to be in this movie in equal parts!"

I am really hoping my cable modem comes back online in time for me to download screen cam footage of this hot movie. There are so many stars in the NSRDDL that I just wanted to keep asking the librarian questions. Unfortunately, another part of the law is that if you ask them more than three questions a year, they are allowed to come to your house and have sex with you or your pets.

Lowtax provided me with some delightful insight into his working environment today when he sent me his desktop wallpaper at the office. Now you too can be like R-Lo; just download the wallpaper, take off your pants, and get anally violated by multiple ad networks while trying to be funny through a haze of booze and depression! Come on, it's a great game! Here's a sneak preview: 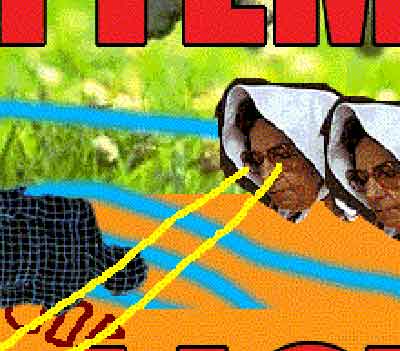 There's a lot more insanity where that came from. Take advantage of this shattered husk of a man before he rebuilds himself with a new job and new friends. Click HERE to download the full-sized OFFICIAL SOMETHING AWFUL DESKTOP IMAGE.