Now, would you like to know more about Mermaid Shelly and the mermaid lifestyle? Many SA Goons answered "yes," so Mermaid Shelly started a separate Ask/Tell Q&A thread; read on to learn about merverts, mertenders, and MerMatt!

So what can I answer for you? We’ve already established a little about me; I’m a mermaid, a biologist, a merfolk tail maker and an environmental blogger ... I live in San Diego, California and traveled to Las Vegas in August for the first MerCon and World Mermaid Awards. Please let me know if there is anything that you’d like to ask about the merfolk community, ecology issues, environmental conservation efforts, tail making, etc. 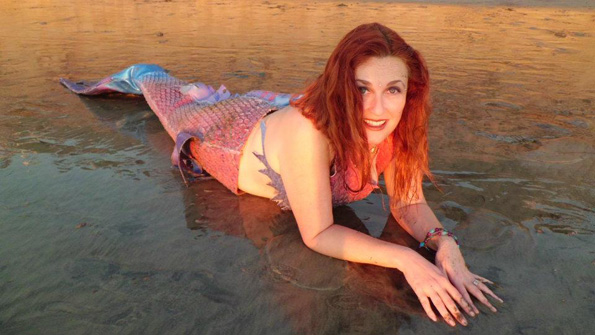 Why mermaids? I have my own obsessions, but you've sunk more money and effort than I could ever dream of spending on my own, so you must have some kind of reason for liking mermaids so much, or at least something you see in them.

Why not mermaids? When I first saw Splash! that was it for me ... and it never went away I guess! Everyone has their cosplay dreams and this is just me living out my alternate reality

I know hundreds of people that do this; we actually had a convention in Las Vegas in August. So just when you think you're into something strange, you never know when you'll find others just like you. We have a whole community on Facebook and MerNetwork (yep, a mer forum page!) where I found out there are actually 3 of us just here in San Diego. Crazy awesome!

At the convention, are there loads of people with mertails being wheeled around? That is a hell of a mental image.

The hotel did have wheelchairs that we could borrow, so there were a few of those around. Mostly big guys were recruited to sling a mermaid over their shoulder in full caveman style or two guys would take a merperson under the shoulders & knees and carry them around. My husband wound up getting recruited to mertend for a lot of the single ladies, including carrying them out of the pool soaking wet and placing them on a chaise lounge and really hurt his back. So as fun as it was for the guys, it had its price. Those things weigh a ton, especially in the water!

How does everyone get around with mermaid tails? [When they don't have hotel wheelchairs at their disposal.)

We generally use another person (spouse, friend, whatever) who serves as a Mertender. Mertenders are in charge of zip-ups into tails, dragging you around in a wheelbarrow or over their shoulder, photos and fetching things for their mers... and security, most definitely! You would not believe how many kids have almost drown my mermaid friends because they are a little too real looking in their tails!

So Mertenders really make it all happen... 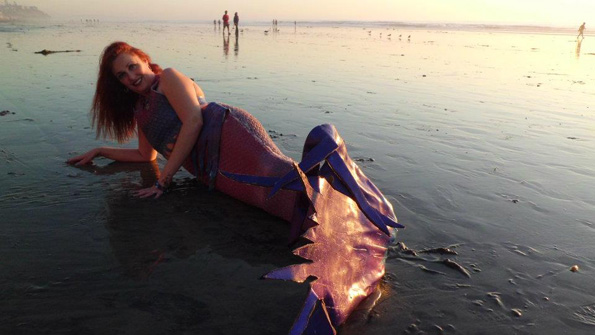 Have you ever had any incidents where people acted like dicks to you on the beach because you're dressed up in mermaid costumes?

Totally! It is so funny too because the reactions are split pretty much 50/50. Some people think we're filming for a commercial which always cracks me up... I WISH I got paid to mermaid! LOL! So they are always really cool and appreciative and shyly come up to us to see what we are doing. Others that are out surfing or jogging might just shout out "wicked!" or give a shaka sign as they go by.

Then there's the ones that are quite obviously trying to steer their kids away (like great! One more thing that Alice is going to want for Xmas now, thanks!) and those that stare and shake their heads. I think my personal favorites are the ones that come up and just ask "why?"

I always love to say "because I can" and let them wonder about it...

Have you or any mers you know gotten in trouble for swimming in-costume in a non-private pool or in the ocean? Do mers normally even swim anywhere that's to any degree public? Or is it too risky? If they do, what kind of reactions do they get, both from swimmers and from people in authority?

Unfortunately yes. I have a friend that lives in Tennessee who actually got kicked out of her paid swim club for swimming in her tail. She swam there a few times in her tail just fine, but then one day they banned her out of nowhere which was really sad. Especially when there was no existing rule and she paid for the membership!

I have swam in Mission Bay and in Coronado here in San Diego with lots of people around. People were really nice about it and are interested in the tail and what it is like to swim in one. I think if anything it is me that is nervous wondering what they are going to say about it, but I am always pleasantly surprised and even chide myself afterwards for being so nervous for no apparent reason. On one occasion we were guerilla mermaiding at a beautiful fountain in an office park on a weekend and got kicked out by security, but I sort of expected it. We didn't have permission and it was private property and closed. But even then they were cool and let us have another 15 minutes to finish up our photos.

Do you think of yourself as/wish you were a fish?

I would have to say no... just more of someone who has empathy for their perspective and wants to swim as one