George Costanza: Let me ask you something. What do you do for a living, Newman?
Newman: I'm a Courier.
George Costanza: Aren't those the guys that always go crazy and come back with a gun and shoot everybody?
Newman: Sometimes.
Jerry: Why is that?
Newman: Because the raiders never stop. They just keep coming and coming and coming. There's never a letup, it's relentless. Every day they pile up more and more, and you gotta take 'em out, but the more you get out, the more keep coming in! And then Caesar's Legion breaks in! And then it's Super Mutant Day...!
Jerry: All right, all right!

(George sits down next to Elaine - opposite Kramer)
JERRY: (To George) What's the matter?
GEORGE: (Slowly shakes his head) My mother caught me.
JERRY: "Caught" you? Doing what?
GEORGE: You know. (All three give him blank stares) I was alone..
ELAINE: (Making a face of surprise) You mean..?!
GEORGE: (Nods) Uh-huh.
KRAMER: (Laughing) She caught you?
(Elaine laughs with Kramer)
JERRY: Where?
GEORGE: (Not really wanting to embellish) ..I stopped by the crater to drop their Fat Man off, and I went down inside for a few minutes.. Nobody was there - they're supposed to be scavenging. (Jerry and Elaine look at each other - enjoying the story) My mother had a 'Live and Love' magazine, I started leafing through it..
JERRY: "Live and Love"?
(Kramer and Elaine laugh slightly)
GEORGE: ..So, one thing lead to another..

WHATLEY: All right, it is cavity time. Ah, here we go. Which reminds me, did you hear the one about the Grand Zealot and the trader's daughter? Huh?

JERRY: Tim, do you think you should be making jokes like that?

WHATLEY: Why not? I'm a Child of Atom, remember?

WHATLEY: Jerry, it's our sense of humor that sustained us as a people for 100 years.

WHATLEY: 200! Even better! Okay, Chrissie. Give me a schtickle of Med-X.

JERRY: And then he asked the assistant for a schtickle of Med-X!

ELAINE: Why are you so concerned about this?

JERRY: I'll tell you why. Because I believe Whatley converted to the Children of the Atom just for the jokes!

*geroge sees a freshly dug grave* *looks around and sees no one* *takes a bite, having not noticed the grieving mother standing near the grave, She runs away in horror* Jerry: Let me get this straight, you see a body in a grave, and you think to yourself "what the hell, I'll eat some human" George: no, no no, NO! It was not Human! Jerry: Was it in a grave? George: Yes

Jerry: Then it was human George: It wasn't down in. It was sort of on top Jerry: But it was in the grave! George: Above the rim! Looked more like a ghoul honestly. Jerry: Adjacent to human is human George: He was on a tarp, and still smelled pretty good! Jerry: was it eaten? George: One little bite Jerry: Well....Thats Cannibalism

Oh, if I hear about this supermutant one more time...

I'm tellin ya the supermutant is alive. The Master has been

experimenting with supermutants since the bombs fell.

Will you stop it. Just because a hospital gets a grant to study

DNA doesn't mean they are creating a race of supermutants.

Oh. Jerry wake up to reality. It's military thing. They're

around I'm looking a whole lot better. Then if somebody wants to

fix me up at least they could say, "Hey he's no supermutant!"

Believe me, there'd be plenty of women going for the supermutants. No

matter what the deformity you'll find some group of perverts

attracted to it. "Oo that green skin turns me on." 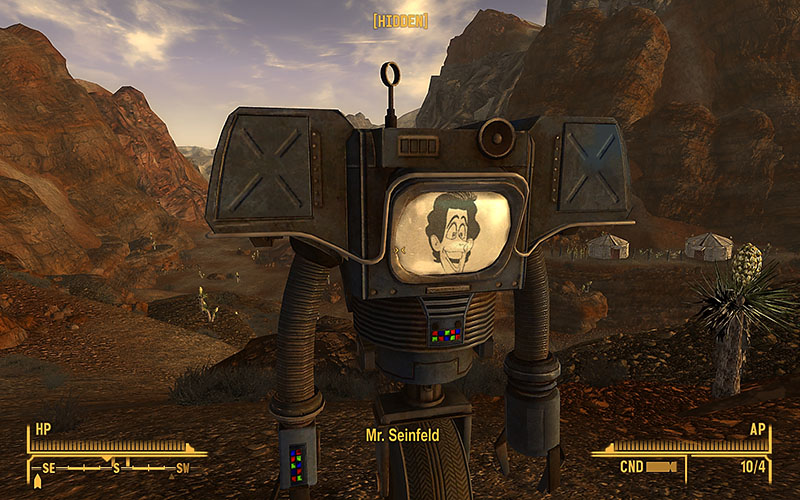