I am Very Satisfied with my Tlingit Ghostmask

I'm a modern Filipino that lives in the city (Makati 4 lyfe), but my parents and grandparents kept me in touch with the ways of my rural ancestors. For example, they taught me over many summers how to build my own nipa: 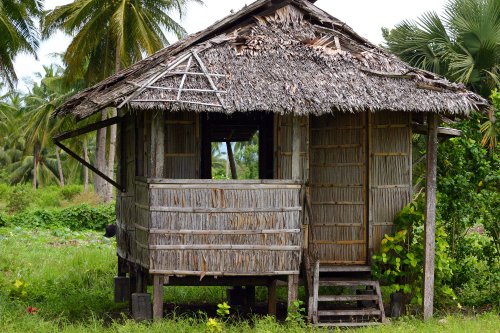 That's actually the one my cousin Paterno built with his dad last year -- the one i made when I was 16 got washed away by a typhoon while I was in a comfortable house in Manila.

Our villages have mayors and aldermen and such now, but the heirs of the old chieftains and members of the traditional leading families get voted into those positions anyway. My grandfather was a descendant of a chief. 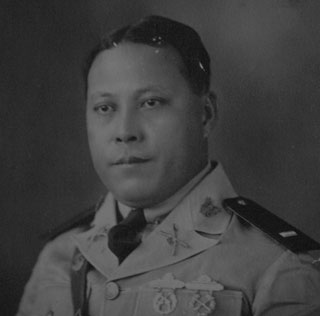 When he was released from a Japanese prison camp in 1945, they made him mayor right away even though he hadn't been home for 6 years.

This was his dad, my great grandfather, when he was young: 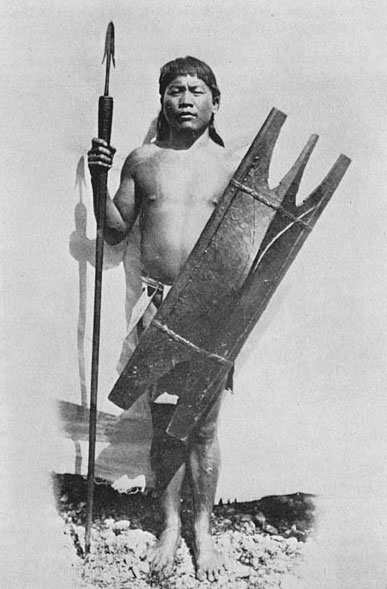 My great grandfather again (the civilian to the right, in the center of the pic) later in his life: 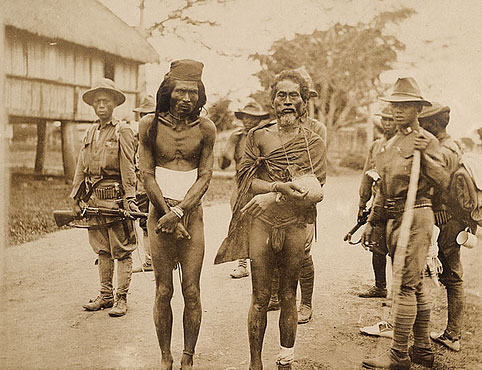 he American colonial government sent in the native constabulary to arrest him after he led warriors to raid a neighboring village for goats, chickens, and wives (we're from the Bontoc tribe that live on the border with the cowardly Isnegs). Raids had always happened for centuries and the Spanish never interfered because they respected our traditions. The problem was that the Isneg tribe allied themselves with the Americans and provided foot soldiers for their native regiments, including the constabulary. They had their ear so they used that opportunity to take it out on us Bontocs. Those guys in uniform? Yep, Isnegs.

The American magistrate sentenced him to 15 years, but let him out after 3 because of a general amnesty. He learned a lesson and groomed his son (my grandpa) to serve the Americans. The Isnegs still mostly had the advantage because they allied first, and were made NCOs over Bontoc footsoldiers. My grandpa was an abberation when he became an officer.

Long story short, between 1905 and 2005, there was still low-key violence between my village and the Isnegs nearby. Mostly fistfights between groups of youth and the occasional murder. They always had the advantage over us because they retained their influence after independence (8 out of 11 governors of the province since independence were Isneg). After 2005, when my grandpa died of prostate cancer, my dad's older brother (the new mayor) vowed to reclaim our honor.

He invited every man over 14 that was a descendant of a villager to come home and pay respects to my grandpa. Half of us lived in Manila, but we all came quickly. We expected to go to the church for the funeral, but instead he led us on a hike to a valley in the opposite direction of the Isneg villages. We stopped after a half hour and he made us start digging without telling us what we were looking for. My dad's younger brother, Paterno's dad, dug up the first ammo crate. They were full of spears and shields, similar to the ones in the picture of my great grandpa as a young warrior above.

"They controlled the army you idiots, they'd notice if any guns were missing," my dad was annoyed by my and my brothers obvious disappointment.

"We're not cowardly ambushers. We're not Isneg." was the only thing the new not-yet-elected mayor told me when he distributed the spears and shields. We all looked out of place in modern t-shirts and shorts. Paterno's dad is a successful engineer and at the time he wore a sharp-looking blue polo shirt with brown slacks that looked straight out of the country club.

The women pulled out my grandpa's casket out of the church and had set it out in the central plaza by the time we marched back. My heart sank because I already accepted that we were going to fight the Isneg. All this digging was just for some stupid traditional ceremony? Then we passed the coffin and left the village behind us again.

The halfway point to the Isneg villages was obvious. The road on their side of the boundary was paved.

"What is this shit?" my uncle yelled at a crowd of Isneg that was waiting to meet us. They outnumbered us three to one and they had come in cars and jeeps. They also had the same kind of spears and shields that we did.

Three Isneg went to meet us -- their mayors. Two of them were confused.

"You're Mayor Napu's son?" One of the bewildered ones asked my uncle. He glanced at the other baffled mayor and then both of them together stared at the back of the calm one's head.

"Mayor William* told us that all Bontocs in the Valley of the Karabao were going to meet us here."

*It's fashionable for Isneg to have American first names -- this mayor's last name was Magtanggol, and they pronounce it "Weeeeel yaaaam"

"No. Only junior here challenged me," mayor William was sneering at all of us.

"When a barangay challenges a barangay, it is a private problem." My uncle's knuckles were white from gripping his spear tight.

"If it was from someone honorable like an Ifugao or Kankana, I wouldn't need observers." his grin was wide and it was clear he was suppressing laughter.

The other Isneg mayors raised their eyebrows and looked at each other again. Obviously that wasn't what mayor William told them to expect, but they kept quiet. Isneg always backed Isneg.

"Then move them aside and get these fucking cars off the road."

The Isneg from the observer villages threw their spears into their trunks and cargo beds and looked dejected. The ones who we were to fight were stiff and grim, faces neutral like mahjong players. I tried to pull the same attitude, but I was too shaky and felt too ridiculous to keep it up.

The fighters seperated into two groups on opposite sides of the stretch of road. It was going ritual combat, the same way as our forefathers fought a thousand years ago. First our mayors were going to throw spears at each other while we backed them. If nobody died (and usually in this phase nobody did -- 30 yards is awful long for an accurate spear throw), the two groups would rush each other while shrieking war cries. But instead of starting a bloodbath, we'd stop halfway and start goading each other. Each side would then send one person at a time to make a single thrust against his counterpart. We'd cycle through everyone and continue until someone gets hit or gives up. The losing tribe would be dishonored and the winners would go home with the losers shields.

My uncle was explaining this all to us when he got shot from the back. He toppled forward screaming in agony and behind him we saw mayor William with a handgun.

We were frozen for what felt like an eternity when Paterno's dad screamed and threw his spear at mayor William. The rest of us followed up with our own throws, and the treacherous Isneg cowered behind their shields. We rushed forward with just our shields and our fury. I tackled an Isneg that looked barely 15. He had a spear, but like the rest of his compadres he didn't get a chance to use it.

The observers surrounded us, but hadn't rearmed. We could have killed mayor William and his people and the only thing the other Isnegs would have done was pout and pleaded with their eyes. It's not that we didn't want to kill mayor William. But we never got to the point where we could pick up and use the spears lying all around us. My uncle limped behind us, cursing and screaming, and broke us from our frenzy.

"Fuck! Fuck! Fuck" he kept repeating over and over in English. He was clutching his bloody thigh and it looked gruesome at the time. It was just a graze with no permanent harm done. "Fuuck!"

The observers took this opportunity to pull mayor William and his villagers away and throw them into the vehicles. They offered to drive our wounded to the hospital, but we declined because the only one hurt was my uncle the mayor.

They retreated in a very disorganized fashion, leaving us the following:

- All their shields and spears, and half their bolo swords (many passed down through generations)
- Their village's chief's ceremonial mask (hundreds of years old, if it's anything like ours)
- One abandoned jeepney (sans keys, but we hotwired it)
- Their village chapel's cross (in the pagan days we would have brought statues of our village patron gods, but we sycretized some of our traditions with christianity)
- A dozen ceremonial woodscooters

It was a good haul, and we brought everything back to the village an hour later using the jeepney.

While Paterno's dad had a triumph near the village center on a wooden throne hastily added to the jeepney, my other uncle was brought to the medicine man--my cousin--'s house. He's a shit medicine man, but he was all we had. The herbs were good enough to numb my uncle's pain and he didn't have much damage to fix (or make worse) anyway.

We put my grandpa's casket at the door of the church and put the jeepney and most of the captured artifacts in the middle of the plaza. Then we set them on fire and took pictures and made cell phone movies.

We kept the woodscooters for our own use. 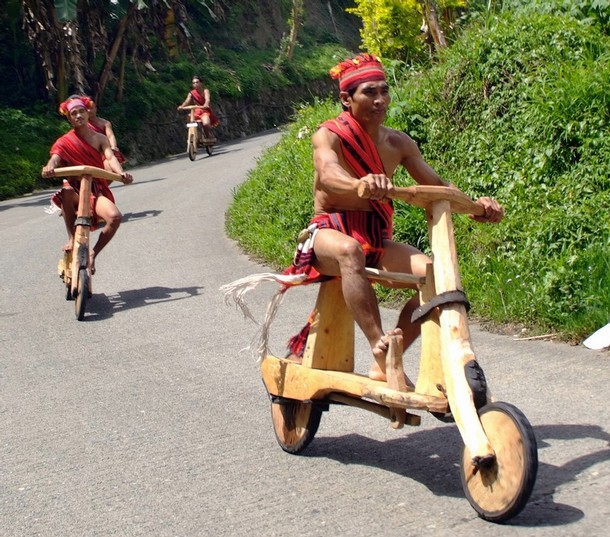