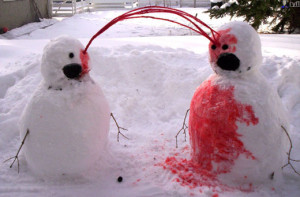 My grandpa gave me an old-school shaving set for my birthday.

Christmas 2001, my cousin who digs anime just a bit too much took up a habit of cosplaying videogame characters. She was so far gone into it that she showed up at Thanksgiving that year dressed up as Squall from Final Fantasy 8.

So being the jerk I was, I took a ziploc bag and placed a butter knife inside it. Then I carefully folded and stapled some thin cardboard to the top of the bag, and wrote "Squall: Do It Yourself Scar Kit" across it.

When I was like 9 years old, I wanted a Gameboy more than anything. The tradition in my family was we could open one gift on Christmas eve (that was since expanded to we can open everything on Christmas Eve, which rocks).

I eyeballed this one gift for weeks, it had the shape, the weight of a Gameboy. When I was allowed to open one gift, I went straight for that one. It ended up being a set of like 40 Crayola Markers. My little 9 year old heart crushed. To make matters worse my best friend at the time got a Gameboy, and I remember calling him up on the phone just to listen to him play it.

My dad got me some kidskin gloves for Christmas last year.

My favorite animals are goats and I have been a vegetarian since I was 13.

Thanks dad. I gave them to some homeless guy outside a coffee shop the next day, still in their little box.

My aunt used to go through the effort of mailing us presents. She finally stopped at some point, which was fantastic.

When I was eleven, she gave me a tiny Dover book entitled 'My First Crossword Puzzles'. This was the kind of thing with no word longer than five letters - CAT and HAM and HOUSE and things like that. This was the same year I won some award from the CTY program, so I was a little put off. I think I used it to make a tent for my hamster.

Then there was the year of the decorated sweatshirts. We all got them. Mine was bright purple, with some fabric cut-outs of ducks and fish puffy-paint-glued to the front, with glitter and some ripply ribbon hot-glued around them. I wish I'd taken a picture of it, but you don't realize when you're thirteen that when you're twice that age you'll want to show the atrocities to people on the internet.

We do a gift exchange at my grandmas with my mom's family. All the guys buy a guy gift, the girls, a girl gift, then we randomly select a gift. Yeah, that turned out real good a few years. I got an orbital palm sander when I was 20, baking sheets when I was 21, and $20 in losing lotto tickets when I was 22.

When I was 8 I got my first BB gun for Christmas. Being excited to get my first gun I shot it at the fence not even thinking about ricocheting, needless to say it came back and hit me in the shoulder leading to my first gunshot wound. My favorite Christmas present ever!

My grandma is quite possibly the single worst gift giver I have ever come across. All my friends always got sweet gifts from their grandmas (money mostly) but I always got the most horrible dusty crap that she obviously just scrounged up from somewhere around her house. oh and always wrapped in newspaper. The real topper though was about 10 years ago when she gave the "family" or one present for everyone in the household of a phone pen. basically like the pens on the chains you see at the bank. We all wondered if she just stole the thing because it wasn't even in a box.