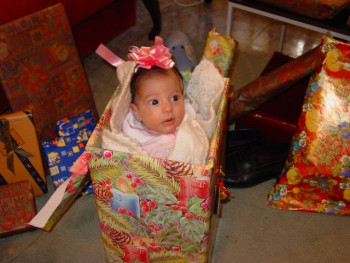 I got a cheap necklace from an aunt that had a small tag with letter engraved on it. A letter not in my name.

I don't remember if I asked her if she knew what my name was.

Well, I got bashed in the skull by an Iraqi on Christmas Eve, does that count? You know, a concussion, the gift that keeps on giving!

Naw, the absolute worst gift I got was from one of my older brothers.

He came over on Christmas, obviously high, dropped a black plastic bag of crap in the frontroom and told my confused kids "Here's your fucking gifts, brats."

Then he collapsed in the front yard on the way to his car, and died.

Well, maybe it wasn't the worst Christmas gift, I hated that bastard.

But the gifts? Yeah, he stole them from my older sister's house. He broke in, stole all the presents under her tree, and gave the ones he didn't pawn for meth to my kids.

His Christmas gift to me was explaining to my kids what had happened, why they had to return the gifts, and that no he wouldn't be coming back.

I got a outdated telephone book from my godfather a long time ago. He did a lot of drugs back then. I think he just wanted to see if I would actually say thanks, which I did.

When I was 10, I got a computer for Christmas. Doesn't sound bad, right? Well consider this:

- It was the computer that we had in the house to begin with, my dad bought a new one for himself.

So basically I got something that I could use anyway, and had to pay 1000 bucks for it. Thanks dad! Seriously, has anyone ever had to pay for their presents received?

I sent a friend of mine a series of comic books that I thought were hilarious, called "The Bunny Suicides".

I had no idea that three days earlier her pet rabbit had wriggled out of her arms while she was holding it, fell and landed on its head, and died.

Yeah that was awkward.

Two years ago my Aunt gave me a pez dispenser, without any pez. I'm 19 years old.

The only bad gift I can remember getting was some sort of Transformers knock-off my Grandfather got me. It had dozens of little pieces you had to pull off and put back on in different places after you transformed it. Gramps decided to 100% child-proof it by glueing all the little pieces in place, making the toy useless.