As Above, So Below; The November Man; Calvary; The Zero Theorem; Mischief Night

After last week's miserable death march of movies, we decided to dig through backalley arthouse dumpsters and VOD queues for the best in Labor Day weekend cinema. As it turns out, there is plenty of good stuff out there. You just have to know where to look. Sean "Keanu Grieves" Hanson digs into the found-footage horror of As Above, So Below. Joseph "Jay Dub" Wade is coaxed into one last job with superspy Pierce Brosnan in The November Man. Martin R. "Vargo" Schneider sings the praises of Calvary. Jordan "CloseFriend" Saïd breaks down the math of Terry Gilliam's The Zero Theorem. Finally, Ashley "TwistedLadder" Herald revels in the subversive horror of Mischief Night. And if none of this strikes your fancy, I hear that Ghostbusters movie is back in theaters. That's probably pretty good.

As Above, So Below

EXPECTATIONS: The Descent + found footage + French people + the gates to Hell = a movie tailored to my tastes. I'd be embarrassed to admit just how many times I've watched the trailer.

REALITY: Because I am the target audience for As Above, So Below, it's difficult to admit its faults, so here they are up front: This movie takes a little too long to get going and stretches plausibility at every turn, the characters' intelligence oscillates according to the situation, and the trailer gave away two of the best moments, as well as the biggest surprise. If you have a hard time forgiving characters who do stupid things to advance the plot, you hate ShakyCam, you're prone to motion sickness, you get really offended by the ways in which Indiana Jones affected popular perceptions of archaeology, and/or you can't stand it when a movie devotes more than half of its running time to building a (kinda ridiculous) premise, this isn't the movie for you. Hell, maybe that's most of you. If, on the other hand, you don't get nitpicky and tend to roll with a movie, wherever it takes you, this is a damn good time at the movies. 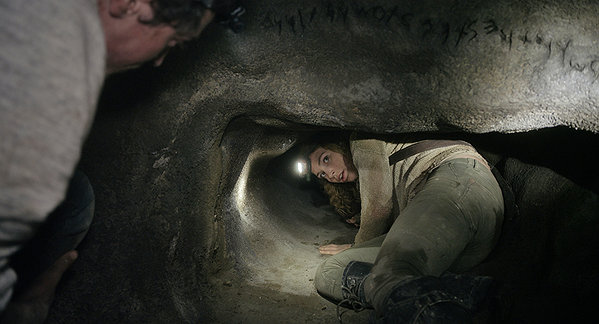 "Come with me if you don't want to live."

Suffice to say, As Above, So Below crept into my critical blind spot by hiding a few flaws I'd ordinarily despise behind a lot of qualities that I find extraordinarily appealing. Take, for instance, the premise: Scarlett (Perdita Weeks) is a self-described "urban archaeologist" following in her late father's footsteps by scouring the world for the mythical philosopher's stone. The film quickly establishes that the search (but more likely depression) drove her father to hang himself, and his suicide haunts her. As such, she's willing to go to extreme lengths to do what her father couldn't. She sneaks into an Iranian demolition site to get her first clue, breaks into churches and museums, and dragoons George (Ben Feldman), whom she once left to rot in a Turkish jail, into aiding her. George is the most improbable character, a man in his twenties who speaks Aramaic and trespasses to fix broken clock towers. (How he supports himself financially is perhaps the film's biggest mystery.)

But, as the saying goes, all roads lead to the French catacombs. There, Scarlett and George, with the help of a cadre of English-speaking French people, look for a secret tomb beneath the rubble of the old Rue d'Enfer (literally "Hell Street," but none of French speakers comments on this), in which, Scarlett deduces, a Renaissance alchemist was buried with the stone. I might be missing a few details, but them's the broad strokes of a spectacularly overcooked setup. For a film that's 93 minutes long, As Above, So Below devotes a good chunk of that time to building a concept, but at least it's in service of something entertaining: Catholic-horror iconography, the existence of a weird cult that falls out of the plot like spare change (although I appreciate that it's a tangential flourish in a movie that explains the shit out of everything else), claustrophobic sequences in which characters crawl through uncomfortably tight spaces unaware of the horrors that lie beyond, scenes in which Scarlett and George get to solve ancient riddles, and a wonderful final act in which all of these pieces fall into place. 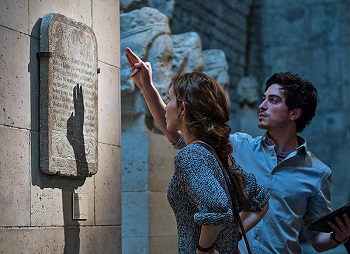 Ah yes, the old shadow puppets puzzle.If nothing else, As Above, So Below compensates for its convolutions and a lack of subtlety with reinvention and dread. How co-writers Drew and John Erick Dowdle (once upon a time, they were responsible for the truly awful Poughkeepsie Tapes) imagine Hell is at once classical, literal, and cinematically rich. Once you realize that's where the characters are headed, and that the only way out of this underground maze requires them to go deeper into the Earth (a.k.a. into Hell, even if that makes no fucking sense geologically), John Erick Dowdle, who also directed, builds horror via anticipation. But the film's greatest strength lies in Scarlett. Unlike The Blair Witch Project's Heather Donahue or Paranormal Activity's Katie Featherston, Scarlett is rarely depicted as helpless or hysterical. True, she leads the men into the worst possible situation, but she's also the first to identify the problem, settle on a solution, and lead George by the hand away from danger. She's intelligent, resourceful, determined, courageous, quick-witted - all remarkable values in a genre that usually capitalizes on panicking women. She's Indiana Jones here, and George is her Willie Scott. What's more, there's even a neat subversion of the standard-issue found-footage ending. Most of these movies are content to conclude with the protagonists dropping the camera so we can watch as a witch/ghost/death cult/werewolf kills them off. As Above, So Below hits that point and then it keeps going.

MINORITY REPORT: I can absolutely get behind Found Footage Lady Indiana Jones, as long as she never ends up in a refrigerator. - Ashley "TwistedLadder" Herald