The boys are back in town! And the girls, they're back in town, too! The gang's all here for one more ride on this crazy train we call Current Releases. Whether it's the elderly slugfest of The Expendables 3, Boyhood's decade-in-the-making drama, or Let's Be Cops, the most ill-timed comedy of the century, there really is something for all tastes this week. We even have you sci-fi and horror fans covered, too! The film adaptation of Young Adult favorite The Giver and found-footage horror film Wer round out this week's reviews.

EXPECTATIONS: As I write this, I'm sitting in my car, about to enter the theater. Thanks to the mind-numbing Expendables double feature I pulled last night, I'm running on only a couple hours of sleep. And after a full workday spent staring at a computer screen, my eyes are starting to burn, no doubt begging for sensory input that doesn't involve electronics. Well guess what, dumbass eyeballs, I'm treating you to two more hours of everyone's favorite sixty-year-old meatbags. If you decide to shut down and melt right out of my skull, I would not hold it against you. 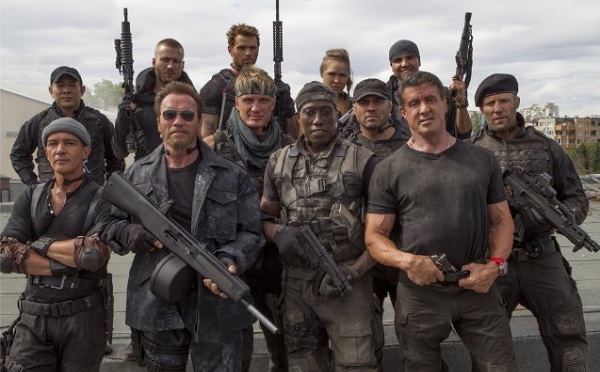 Stop! Or My Murder Team Will Shoot

REALITY: Let me go ahead and put this on front street: I didn't care much for either The Expendables or its sequel. What began as the granddaddy of all stunt-casting gigs quickly turned into an angry franchise perfectly content to wallow in its own washed-up attitude. While the action was kind of fun and mostly chaotic, the scripts lacked that certain spark. There were barely any characters to speak of, and you could see the one-liners coming a mile away. Whatever The Expendables was trying to do, breaking new ground was definitely not in the cards. So color me surprised that Expendables 3 veers so far into the realm of self-parody that it almost becomes a fun movie. Almost.

The film opens as Barney Ross (Sylvester Stallone) and his crew (Jason Statham, Randy Couture and Dolph Lundgren) spring Ross' old buddy, Doc (Wesley Snipes), from a prison train. With Doc in tow, the gang meets up with Hale Caesar (Terry Crews) to attack their as-yet-unknown target. That target turns out to be a former Expendable named Conrad Stonebanks (Mel Gibson), who blows up some buildings and quickly flees the scene. Later, Bruce Willis' replacement (Harrison Ford) shows up and tasks Ross with bringing Stonebanks to the Hague as a war criminal. Deciding this mission is far too dangerous for the old Expendables, Ross enlists Kelsey Grammer to find him a team of younger recruits (Kellan Lutz, Victor Ortiz, Ronda Rousey and Glen Powell). Of course, none of that sits well with the old crew at all. They're in it for the fight, and by god they're going to get a fight. Also, Antonio Banderas hangs around, desperately waiting for a chance to join the team. 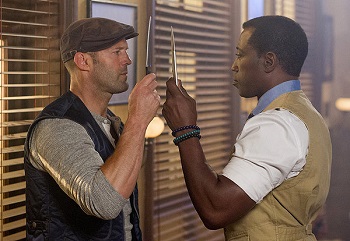 You really don't need me to tell you if Expendables 3 is your kind of film. Just look at that cast up there. If even a third of those names gets your pythons all jacked, you'll probably think this film is a hoot. If it bothers you that I don't name all of the characters, understand that it's mostly because so many of them have boring, unmemorable names anyway. Things like character and backstory are more or less perfunctory here, so it's not like I'm doing anyone a great disservice. When you already have characters with great names like Lee Christmas and Hale Caesar, it's honestly kind of disappointing to introduce new characters with single names like Smilee and Drummer. What's Drummer's first name, Sly? Is it Tom? I'll bet it's Tom.

One thing that definitely gives this film a leg up on the first two is its villain. As the series has progressed, it's traded up for bigger and better villains each time out, and Mel Gibson is much more menacing than Eric Roberts or Jean-Claude Van Damme. He seems to relish the chance to play another villain, and he chews his lines like a ravenous wolf. Only a person as apparently unhinged as Mel Gibson can sell a line like "I'll open your meatshirt and show you your heart." Of all the tough guys littering this series, he's one of the few who actually knows how to play tough.

That said, Gibson isn't the only one enjoying playing a lunatic. It feels like the only people truly having any fun in this movie are all newcomers to the series. While Gibson is busy hamming it up in Psychoville, Wesley Snipes and Antonio Banderas add some much needed fun to the mix. They look so excited to be doing an action movie again that they simply cannot contain themselves. Banderas, in particular, bounces around the screen talking at a hundred miles per hour about absolutely nothing, and would damn near walk off with the entire film if he were in it long enough. His character, Galgo, has a tragic backstory to tell (as the El Mariachi music plays in the background), but Banderas plays him like a lonely kid begging for the other kids to let him join the baseball team. His energy is infectious, and it's really too bad he couldn't infect more of the film. 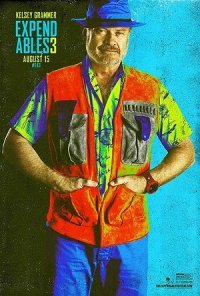 Poster of the Year, 2014.That's the kind of energy this series desperately needs. The whole point of The Expendables is to give the old farts one more chance to go out in a blaze of glory. They've had three chances at this point, and it's taken them this long to find enough of the right players to make things exciting. Guys like Banderas and Gibson can take this tired material and spin it into gold by sheer force of will. What does Randy Couture really bring to the table? This would have been a prime chance to weed out a few of the more, *ahem*, expendable Expendables, but the film is so dedicated to its PG-13 rating that every last one of the eighty-seven good guys shows up at the end of the film.

So much of Expendables 3 teeters on the edge of parody that it wouldn't take much of a nudge to send it into 21 Jump Street territory. In fact, if Expendables 4 ever winds up happening, Stallone should seriously consider asking Phil Lord & Chris Miller to direct. This series is ready for a different approach. When your heroes take out an entire nation's army without suffering a scratch, where else is there to go?

MINORITY REPORT: For all its faults, I at least learned something from The Expendables 2, that Dolph Lundgren actually has a master's degree in chemical engineering. I doubt I'll be able to say the same this time around. - Sean "Keanu Grieves" Hanson