The Identical; The One I Love

With August dead and gone, movies are taking a break. That's just the opportunity The Identical needed to be the only new film in wide release this week. Libby "Gentleman Loser" Cudmore investigates, with truly disturbing results. Meanwhile, Ashley "TwistedLadder" Herald reviews the Mark Duplass/Elisabeth Moss romantic comedy The One I Love. Duplass has been begging his Twitter followers not to read any reviews before seeing the film, so if you're a fan of avoiding spoilers, check out the movie first and then come back for our review. You won't be disappointed.

EXPECTATIONS: What if Elvis' twin had lived? What if this twin had been given away to a kindly preacher and married a generic blonde lady? What if Elvis had written a bunch of pop-lite songs Cutting Crew would have rejected for being too gooey and lame? Don't worry, The Identical is here to answer all these questions you probably never gave enough of a shit about to ask aloud.

REALITY: Remember when PG used to mean something? When it symbolized the divide between you and your younger siblings, who got sent to bed after Aladdin while you got to stay up and watch The Goonies or Back to the Future? When did the PG become strictly the domain of creepy evangelical feel-goodery? 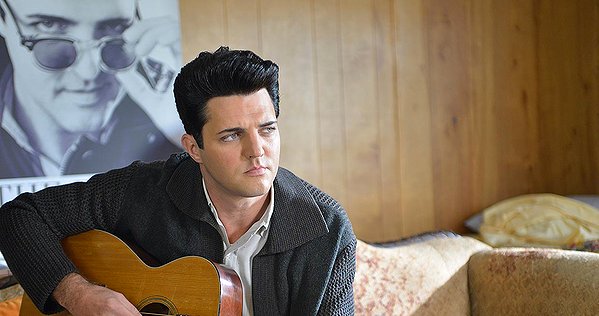 Ryan Wade (played as an adult by Blake Rayne, professional Elvis impersonator/wax statue of Gaston brought to life by an evil spell) is one of two twins born to poor people and raised by revival preacher Reese Wade (Ray Liotta, fresh off threatening to murder a hooker in Sin City: A Dame to Kill For) and Ashley Judd (looking like she just stepped out of a Vintage Life spread). Meanwhile, his twin Drexel "The Dream" Hemsley (also played by Rayne, in disguise as a post-Pirates Johnny Depp) rises to fame as a blue-eyed crooner of songs like "Boogie Woogie Rock 'N' Roll" and "Beboppin' Baby." After winning a Drexel Hemsley sing-a-like contest, Ryan becomes a famous Drexel Hemsley impersonator, struggling the whole time with his identity and desire to write his own hit songs.

Nothing in this film makes any sense. Apparently, Elvis already exists, but everyone's ga-ga for Drexel, who drinks whiskey and never speaks, so forget The King. Everyone notices the resemblance between Drexel and Ryan, but even when Drexel's dyin' Mama (Amanda Crew, looking like a possessed doll that wants to kill you) calls him "Dexter," he doesn't think to investigate why she called him a name so similar to her son's. It's not like they grew up on the other side of the country from each other - they live a few towns apart. But I guess this is the film's blind stab at dramatic irony, so we'll let it slide. 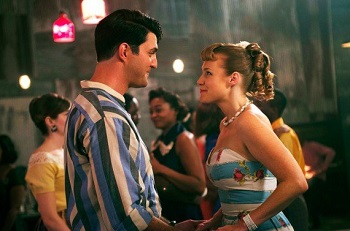 No really means yes when the script says so.And the music. Dear God, the music. Not only is it so far from period specific that it might as well have a keytar in it, but it is unbearably terrible. At one point, Fake-Not-Elvis uses some of this music to serenade Jenny (Erin Cottrell, looking like the star of a faux-vintage tampon ad) who's already rebuked his advances a few times. "I got plenty of songs, and I'll keep playin' em until you go out with me or have me arrested" is an actual line said by the protagonist of this film. It's romantic if you're stupid, but aside from the fact that it's mad creepy, the songs are so awful that he should be hauled away by the cops for domestic terrorism. NO MEANS NO, FAKE-NOT-ELVIS!

Ha ha, just kidding, they get married and live happily ever after. No, really. There is no drama in this movie. Not a drop. Oh sure, late in the game, Fake-Not-Elvis feels a deep longing inside him that causes him to grow a Kenny Loggins beard and walk around with his shirt unbuttoned, and Real-Not-Elvis dies in a plane crash where he doesn't spill a drop of whiskey as the plane/camera shakes and shudders, but this is all glossed over pretty easily with the platitude "God has a plan for you." There is never any worry that Ryan will fall into drugs or that Jenny will leave him or all the other rock movie clichés. There's never a moment of doubt that life will be anything but sunshine and unicorn farts for Fake-Not-Elvis. 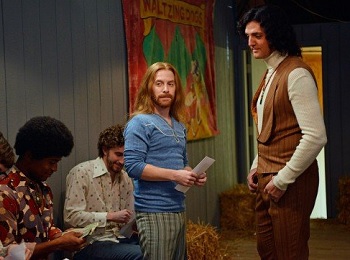 Oh hey, Fake-Not-Elv--IS THAT SETH GREEN?!The religious angle of this film is simultaneously overbearing and completely impenetrable. At Ryan's lowest point (symbolized by ordering whiskey at a bar! Oh, the horror!) Danny Woodburn shows up and tells Ryan that Drexel was the first person to treat him like a real person. This is why he too wears a diamond "Chai" necklace (Hebrew for "Life;" Drexel was a Christian Jew, which was apparently a thing that was acceptable in the south in 1972) and rocks out in a shitty roadhouse band. So...is Drexel Jesus? What does that make Ryan, our main character? Does he represent all of us, struggling to figure out God's plan for us? While whiskey-drinking, velvet-jacket Jesus sounds cool, if your parable goes soaring over the heads of people who aren't already knee-deep in your Christian Zionist nonsense, you're not doing it right.

The Identical doesn't just have Ray Liotta in common with Sin City: A Dame to Kill For. Both are movies for the fans and no one else. If you're not already on board with the evangelical movement, you'll get nothing out of The Identical. It's just not accessible to anyone who isn't already familiar with the source material. The film has exactly one redeeming quality: it has great potential to be The Room's spiritual successor. I can easily picture theaters full of people in velvet jackets, drunkenly singing along to "City Lights," holding up iMenorah apps. My God... It will be beautiful.

MINORITY REPORT: But you never answered the most important question of all: What the hell is Seth Green doing in this movie? - Joseph "Jay Dub" Wade