EXPECTATIONS: When I first heard they were making a movie where Cameron Diaz plays a morally reprehensible school teacher, my first thought was "Oh cool, they're turning that Pink Floyd song into a comedy. Hey, Cameron Diaz, leave those kids alone!" Then, the trailers started appearing on the YouTubes and made the film look like it might be pretty funny. It promised Jason Segel screaming at kids, Justin Timberlake acting kinda goofy, and also Cameron Diaz in the background trying not to be seen. That said, is it wrong that Diaz is the person I expect the least from in this movie? I'm kind of expecting her to be her typical unfunny self while the rest of the cast picks up the slack and makes the film funny for her. That could still make for a pretty entertaining movie, right? 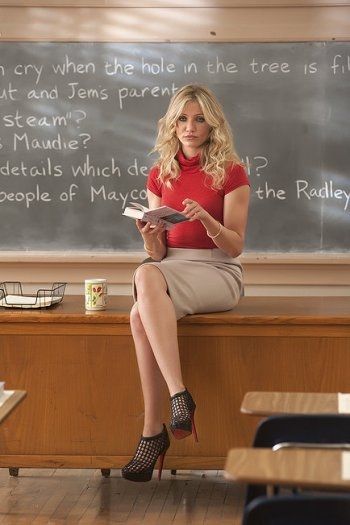 Now pay attention, class...REALITY: Wrong. Wrong, wrong, wrong. Despite the occasional zinger, Bad Teacher just might be the most poorly written comedy I've seen in years. Mind you, I've stayed away from the Seltzer/Friedberg monstrosities, but Bad Teacher has a poorly thought-out plot, thoroughly unlikable characters, and an underlying anti-intellectual streak. In other words, it's everything most people ever wanted out of a comedy.


Bad Teacher is a film that doesn't understand the concept of an anti-hero. It wants to be a movie in the same vein as School of Rock or Bad Santa, but while those films create endearing characters out of unlikable jerkbags, Bad Teacher gives us no reason whatsoever to like the bad teacher. It becomes less a comedy about bad people and more a hateful screed against regular people.

After Elizabeth Halsey (Cameron Diaz) is dumped by her fiance because he realizes what a gold-digging bitch she is, she's trapped for another school year teaching English to middle-schoolers. Soon, a new substitute teacher named Scott arrives who is everything Elizabeth wants in a man; his family is filthy rich and he's Justin Timberlake. When it becomes obvious that Scott is more taken with Amy Squirrel (Lucy Punch), a rival teacher who genuinely gives a rat's ass about teaching, Elizabeth decides to rig the End-of-Year testing, win the $6000 bonus for having the best test scores, and use the money to get breast implants with which to impress Scott.

Along the way, Elizabeth learns an important lesson about relationships and responsibility, and winds up becoming a respected teacher in the process. Or at least, that's what would have happened if this film had been written by people who understood how to make the audience like unlikable characters. While Bad Teacher is funny in fits and starts, it ultimately fails as a comedy (and as a movie) because we have absolutely no reason to ever want to like Elizabeth Halsey. In the first five minutes, it's established that not only is she a gold-digging sex-hound, but she's also a druggie who isn't above yelling at children. The movie goes out of its way to show us that this is the last person who should ever be teaching children, and then soldiers onward assuming we like her just 'cause.

In fact, not only do we have no reason to like Elizabeth, but we also have absolutely no reason to hate the antagonist, Amy Squirrel. If Elizabeth is the "Bad" teacher, Amy is the epitome of the "Good" teacher. If we're supposed to like Elizabeth simply because she's the main character, then we're supposed to dislike Amy because...? Because she's good with kids? Because she's a little too kooky and PG for this R-rated movie? Because she has a stupid last name? Why are we supposed to sympathize with Elizabeth and not the person justifiably trying to get her fired? I knew something was wrong with this film when I immediately, and wholeheartedly, agreed with the antagonist. 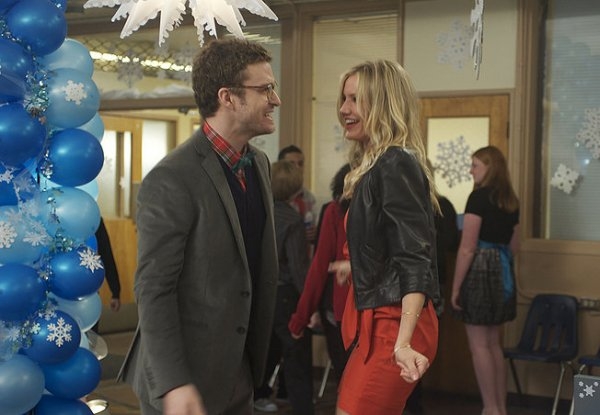 It's funny because it's Justin Timberlake dancing badly and that's not what he's about AT ALL!

This is the part of the review where I started complaining that this R-rated comedy offended me. Why should a silly movie like Bad Teacher offend me? For one, because I was fortunate enough to have plenty of teachers like Amy during my grade school years. They taught me things like how to write, how to think critically, and how to dissect a pig. They molded young little Jay Dub into the brilliant, free-wheeling wordsmith you know and love today. Then I went off to college and encountered far too many girls like Elizabeth who I then discovered were education majors. This led to many nights of drinking and weeping for the future. You'll understand, then, if I see a movie like Bad Teacher and feel as though their lifestyle was vindicated while I was told to shut up and stop caring so much.

One might argue that I'm missing the joke here, that the movie is actually a satire about bad teachers. No, I'm not; no, it isn't. In order to be a satire, you have to follow through once you've established how despicable your target is. Once you've shown us how bad a teacher Elizabeth is, you then have to put her through some sort of trial in order for her, and by extension the audience, to learn something. This never happens. Elizabeth never learns her lesson, yet still somehow comes out on top. The bad teacher never gets her comeuppance, but instead is given the keys to the kingdom. That's not satire, that's just obnoxious writing pandering to stupid people. Election is a satire about bad teachers. Hamlet 2 is a satire about bad teachers (and bad theater, but that's beside the point). Bad Teacher operates without even a single shred of irony or ridicule for its central character.


Given the screenwriters' track record, I genuinely believe Lee Eisenberg and Gene Stupnitsky thought they'd written a brilliant character in Elizabeth Halsey. Cameron Diaz gives the character everything she's got, but the writers forgot to allow the character to grow. As a result, Diaz spends the latter part of the movie kinda bored. "I've been doing this bad teacher routine for ninety minutes," she appears to be saying. "Can I tone it down yet? I'm getting exhausted."

Speaking as someone who actually cares about education (but never bothered becoming a teacher), what really offends me about Bad Teacher is that the people who genuinely seem to care about their jobs -- the ones interested in expanding the minds of children -- are painted as weird, sexually repressed people. The school principal apparently has a dolphin fetish, Amy is depicted as your typical Sunday school teacher, and Scott is his own brand of strange. Elizabeth makes fun of these people, so we're supposed to as well. In fact, the only "normal" teacher in the entire film is the gym coach played by Jason Segel. Like most gym teachers, he's not tasked with doing too much besides showing up and making the occasional(ly hilarious) snide comment.

For people who haven't given school a second thought since graduation, Bad Teacher may be a mildly serviceable comedy for a Saturday night. There are some good jokes scattered here and there, but without a decently structured plot or any characters worth liking, what's the point? It so clearly wants to be a comedy in the mold of School of Rock, but without Jack Black dancing around playing classic rock tunes, it kind of winds up just being School. I've known my fair share of bad teachers, and I sincerely hope the Future Bad Teachers of America Union will look at this film and see a grotesque mirror. More likely, though, they'll wind up loving it and holding it up as their new standard. Bad teachers now have an icon, and director Jake Kasdan is the flag-bearer.

MINORITY REPORT: Films these days take themselves too seriously, so it's refreshing to find any comedy at all. The problem is, none of it is funny. Even when they're joking, nobody's laughing. - Ian "ProfessorClumsy" Maddison