EXPECTATIONS: Now, I know what everybody is thinking and the answer is no. I will not devote my review of The Beaver to poking fun at Mel Gibson and his outdated world views. It is my duty to give this bizarre little film a fair shake. Personally, I think there's some potential in its strangeness; perhaps something compelling lurks underneath its unusual exterior?

REALITY: Have you ever listened to someone moan on and on about how terrible his not-at-all-terrible life is while you're forced to listen, the phrase "We all have problems, mate" looping endlessly in your mind? That's what watching The Beaver is like.

Let me introduce you to the Black family. They are not a black family, they are an incredibly white family with the surname of Black. At the head is Walter (Mel Gibson), a creative genius who is the CEO of a highly successful toy manufacturing company. He has a loving family and a perfect home, and he is also suicidally depressed. Next is his wife Meredith (Jodie Foster). She is a creative genius who designs roller coasters as well as being the best stay-at-home mother in the world, but she doesn't feel loved by her husband. After that we have Porter (Anton Yelchin), the teenage son/creative genius who writes other students' term papers for $200 a pop. He is also in a relationship with head cheerleader, valedictorian and creative genius Norah (Jennifer Lawrence), but he's anxious about turning into his dad. Finally there's the youngest son Henry (Riley Thomas Stewart), who has all the makings of a creative genius, but feels sad because his dad doesn't pay much attention to him. 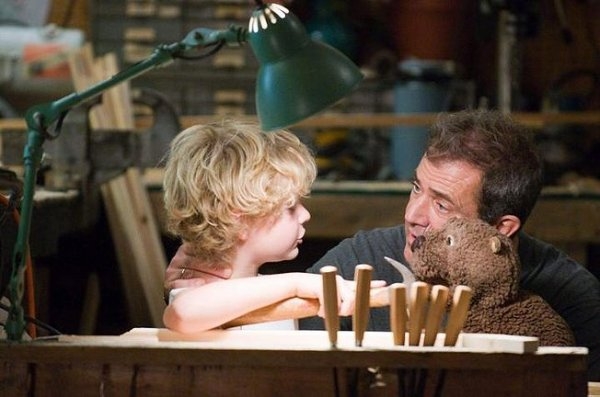 Hardly The Muppets, is it?

I know you're already fully immersed in the lives of these characters and you really hope they get through their problems so they can continue their white, middle-class existence. Well, you'll be thrilled to know things start to pick up when Walter finds a beaver puppet in a dumpster. He starts wearing it always and using it to express himself (in a cockney accent, for some reason). This allows him to take control of his life, earning back the respect of his family and colleagues until things go too far and Walter can no longer allow himself to emerge from behind the puppet.

This brings me to the single redeeming feature of this film, and I feel it is imperative to get this out of the way as early as possible so we can continue on our journey to the centre of The Beaver. Mel Gibson's performance is terrific. He is essentially playing dual roles within a single frame at all times, and it is impressive to see how he pulls it off. The puppet's mouth may be moving, but your eyes are drawn to Gibson's face: There he is delivering two performances at once, his mouth shouting angrily as his eyes react with confusion and fear. He is reacting to the things he is saying as though somebody else is saying them, while still throwing all of his gusto into delivering those lines. There are no tricks here, just pure acting, and it very nearly elevates the film into something else. Sadly, Gibson is never given anything genuinely funny to do, and everything around him is so calculated toward its agenda that eventually I quite frankly felt a little embarrassed for him. 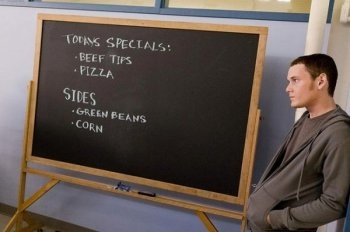 High school students who are pushing thirty aren't ordinarily considered geniuses by those around them.Now, you may have noticed on two occasions that I have specifically described the Black family as being white. In truth, that's par for the course in The Beaver's self-contained universe wherein there are no black people. Not one. This is a white, white world full of white, white people with white, white problems. Therefore, by extension, we can assume that not only is Barack Obama not the president of the United States in this world, but also he was never even born. Director Jodie Foster has created a world where the "White Right" always wins by default and is now reassuring her audience that everything is going to be okay. It's all right, you're a middle-class white American who has a high-paying job you don't deserve and lives in a perfect three-bedroomed suburban house complete with white picket fence and white neighbours. Maybe some mornings you don't feel like getting up and going to work? Well, Hollywood is ignoring your plight no longer. Consider your entitlement complex officially vindicated!

It's all part of the great lie, you see. The great lie that tells us that our kids will be amazing artists, entrepreneurs and world leaders, and that the mundanity of our lives will pay off through their success. I like to think we're smart enough, as a species, to see through this lie now, especially when it wielded so brazenly. The worst part is that the film pretends to debunk the lie. In a climactic scene, a talented teenager calls the previous generation out on their lie and says "Sometimes, shit just happens." Hardly an original sentiment, and definitely one built simply to reinforce the very lie it claims to oppose. Shit just happens and everything you were told about things working out fine is a lie, but it's all going to be okay because we're all super-talented white kids living in a white, white world. I'd be offended if I wasn't so damn bored.

At the end of the proceedings, everything you were expecting to happen happens and everybody learns the value of cherishing what they have. That's all well and good if you're the CEO of a hugely successful toy manufacturer whose wife designs roller coasters and your two sons are well on their way toward being just as successful. But what about people who don't have all that? Well, the people who made this film don't care. This film is for their own kind.

MINORITY REPORT: In anyone else's hands, The Beaver would've starred Jeff Bridges or Bruce Willis, and it would've been goddamn hilarious. It's too bad Jodie Foster apparently has no sense of humor. - Joseph "Jay Dub" Wade