Oh God I'm bored! Pirates of the Caribbean: On Stranger Tides? Boring! Everything Must Go? Mindnumbing! Cave of Forgotten Dreams? Well ... it's about cave paintings, how good can it possibly be?

Pirates of the Caribbean: On Stranger Tides

EXPECTATIONS: For all its many, many, many flaws, Pirates of the Caribbean: The Curse of the Black Pearl was an enjoyable film in the same vein as Richard Lester's The Three Musketeers; big set-pieces coupled with some slapstick comedy and a charming and capable cast (for the most part). Then came the sequel, Dead Man's Chest, which was incoherent drivel of the worst kind. So bad was it, in fact, that I avoided the third film At World's End like the plague. Now that I no longer have the luxury of avoiding the films that offend my brain, I have girded my loins and prepared myself for Pirates of the Caribbean: On Stranger Tides.

REALITY: I think "vaguely watchable" is the kind of phrase best used to describe a film like this, though that relates only to a very small percentage of the film's running time. Once again, as with Priest, we have a big-budget Summer Blockbuster committing that most heinous of cinematic sins - it's just boring as hell!

The action follows fearless pirate Captain Jack Sparrow (Johnny Depp), who hears from his dad Keith Richards (Keith Richards) that someone is impersonating him in order to gather a crew to sail for the Fountain of Youth. After a little investigating, he finds that the culprit is old flame Angelica (Penélope Cruz). Why she's impersonating him is anyone's guess, but Jack soon finds himself coming aboard the Queen Ann's Revenge - captained by the legendary bastard Blackbeard (Ian McShane). Jack agrees to help Blackbeard find the Fountain of Youth, but Captain Barbossa (Geoffrey Rush) is not far behind, and his quest is a much simpler one: revenge. 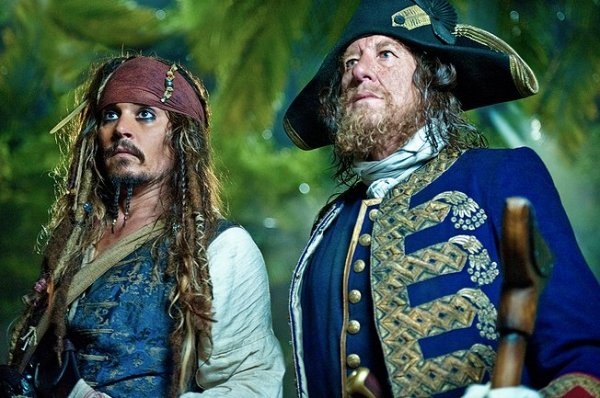 The waxwork models seen here were used whenever the script called for it.

That's not so complicated a premise, is it? But for some reason this film feels the need to take that simple plot and turn it into a needlessly convoluted series of poorly staged set pieces, bogged down by dull sub-plots and painfully uninteresting characters. If you thought the first act was a confusing succession of shenanigans and hi-jinks with Johnny Depp jumping, climbing, hiding or ensconcing himself away through some supposedly hilarious means, then the second act will seem like a load of mermaid-related drivel that's too dark to see. The best way I can describe this film is to say it's just a bunch of stuff.

But surely there's still some charm to be found here? Surely Johnny Depp doing his Jack Sparrow business alongside the inimitable Geoffrey Rush and Ian McShane is worth a look? Well, it would be if they had anything to do. The character of Jack Sparrow, formerly a comedy drunkard who minced around while doggedly pursuing his goals, is now just an Indiana Jones lite, avoiding traps and finding historical artifacts. In the meantime he does very little in the way of entertainment value. His bumbling and fumbling are now limited to the most minute instances of comedy business. Basically, this is what happens when your comic relief character becomes your lead; this is what happens when Jeff Goldblum becomes the hero of Jurassic Park: The Lost World. 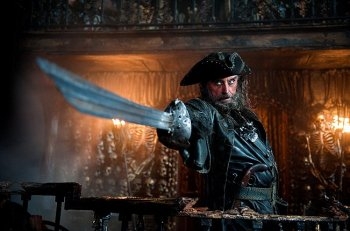 His beard isn't even that black.At least Geoffrey Rush gets some good stuff to do. In fact, he's responsible for the single most memorable and entertaining scene in the whole film, wherein he reveals his peg leg is full of rum. This is a scene in which fun characters, played by charismatic actors, get to interact with each other. Isn't that what performance is all about? I enjoy seeing a swash get buckled, but when everything along those lines is falling flat, we need some characterisation and storytelling to amuse us, so it's nice that they bothered to put a bit in there somewhere.

As for Ian McShane's Blackbeard, the whole character makes no sense. We learn early on that he stays in his quarters, nobody has ever seen him or sailed with him before. Then suddenly, he's present in every subsequent scene in the film. When he is introduced, his beard is constantly smouldering, which it never does again. He has telekinetic control over his ship, which is never explained or even really addressed. It's all inconsistent; on the one hand they want to make a mysterious figure with magical voodoo powers, on the other hand they want to make an emotionally driven, three-dimensional villain. Neither of these goals is successful. Instead, all we have is a guy with a black beard who wants to get to the Fountain of Youth. Why? Presumably he wants to give himself eternal youth, but by the time the third act rolls along (which takes a while) you'll start wondering just what exactly his motives were. The whole thing seems like it was set up purely to evoke the ending of Indiana Jones and the Last Crusade, rather than serving a coherent narrative with characters whose actions make any kind of sense. 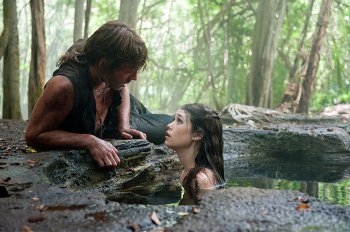 Oh good... it's these two.The main characters being boring and confusing wasn't enough, it seems. Obviously, what this film really needed was a tacked-on romance between a priest and a mermaid. Now we're talking cinema gold! The priest (Sam Claflin) is a member of Blackbeard's crew who consistently doesn't get punished for being a dick to his captain, then falls in love with a mermaid (Astrid Berges-Frisbey). Orlando Bloom and Keira Knightley may have been bland, but at least you remember their characters' names and they actually had some bearing on the plot. Here, a romance between a male human and a female MacGuffin takes up so much screen time that it takes a while to realise that the subplot has even been resolved. The characters vanish before the end and it took a friend pointing out some evidence for it to finally dawn on me what had happened. I won't spoil it, but just remember the established rules of mermaids up to that point. Leaves a bit of an odd resonance that way.

Before we finish, I'd like to leave you with some food for thought. What is the purpose of sequels? Before the birth of home video, sequels provided audiences with a return to successful formulae. Films like In the Heat of the Night and The Godfather probably wouldn't have warranted sequels in this day and age, but in their own time audiences wanted to return to those films and so the sequels were born from demand. Today, sequels are merely a safe choice for film studios to churn out films for easy money. But, you can return to these films any time on DVD or Blu-Ray, so the question to ask yourself is this: Are generic and formulaic re-hashes like these good enough for modern sequels or should we expect more? The answer is that either way, it's entirely your own fault for buying it.

MINORITY REPORT: This would be a much better movie if it was about Jack Sparrow looking for Fountains of Wayne. Remember those guys? - Martin R. "Vargo" Schneider