From Paris With Love; The Red Riding Trilogy

This week, Robert "Macrame_God" Seeders takes a little trip to Paris and sends back a review of Pierre Morel's latest action extravaganza. Staying in Europe, Ian "ProfessorClumsy" Maddison tells you why you should try to track down British crime saga The Red Riding Trilogy.

From Paris with Indifference

EXPECTATIONS: I never saw Pierre Morel's first film, District 13, but I did see his last flick Taken, which for all its faults delivered decent action. His latest film, From Paris with Love, looks like it might be a little too stupid for its own good, but after having to endure The Tooth Fairy I'm not going to start getting picky, especially this early into February. 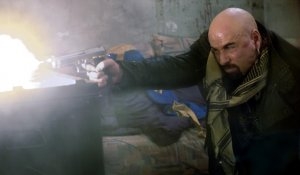 I've never seen a turnip shoot a gun before.REALITY: Have you ever seen an action film? That's right, an action film. You know the type. Usually the story is relatively flimsy and the plot is advanced with scenes involving violence, suspense and thrills. There's probably a fistfight scene followed by a shootout filmed in slow-mo where the hero is shooting not one, but two weapons at the same time while doing things like diving through the air or sliding down tables. Maybe there's a car chase later where our hero pursues the bad guy through rush hour traffic. Perhaps there's not just one hero. Maybe there are two. Oftentimes these heroes have conflicting personalities. One is a loud-mouthed loose cannon and the other is a humble do-things-by-the-book straight guy whose dialogue mostly consists of MY GIRLFRIEND and how he can't believe what a loose cannon his partner is. The two fight at first, but bond over time. Enemies become friends. Friends become enemies. In the end the day is saved after a dramatic standoff sequence. Oh, you have seen that movie? Okay then.

In that case, there's no reason for you to see From Paris with Love. 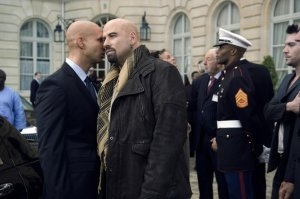 "Psst! John, quit copying my hair style!"From Paris with Love stars Jonathan Rhys-Meyers as Paris-stationed CIA agent James Reese, who works directly with the US Ambassador to France. Don't let the whole CIA thing throw you off, though. Reese is an underling. His job entails shit like changing license plates, placing shoddily made wiretaps in people's offices and keeping the ambassador amused between his stints of doing nothing with games of chess. Reese's life isn't a total drag. He has a hot girlfriend (Kasia Smutniak), a nice apartment in one of the most gorgeous cities in the world and a relatively cushy job working for the government. However, Reese yearns for the next level in life. He wants to be a full-fledged CIA operative so that he can go around and do all that James Bond shit. Well, the government grants his wish and partners him up with one of their "top operatives," Charlie Wax, played by John Travolta.

Here's where From Paris with Love really begins. Wax is supposed to be the hip, wild bad-ass that we the audience members root for, love and want to be, but I found him obnoxious, and not in a fun kind of way, either. When we first see Wax, he's cussing out airport customs officials, belittling France in the most unimaginative way possible and generally acting like a colossal douche-bag. Some people might find this funny, but I thought he was about as charming as a fifteen year old Juggalo hopped up on energy drinks. That's not the least of his character's quirks. He also has this thing where he insists on talking and acting like a black gangster despite the fact that he's starched-linen white and, well, I just can't get over how he looks. John Travolta bald with a bushy beard. He looks like a shaved bear. I know I'm spending a lot of time ragging on Wax, but that's because as soon as he enters the movie he effectively becomes the movie. Travolta pretty much has to carry the film because Rhys-Meyers' Reese is too wormy to get behind and there's no other character that sticks around long enough for us to form an attachment. 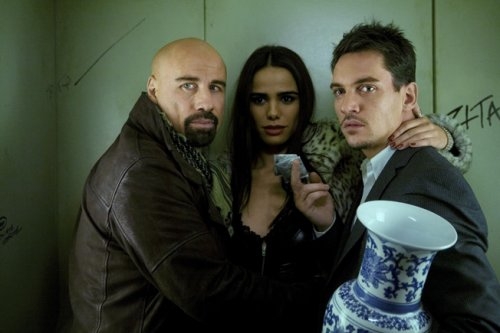 Anyway, Reese thinks he's just going to chauffeur Wax around the city for a few hours, picking up tips along the way, but what happens instead is that Reese gets dragged into Wax's one-man war against terrorism. What's particularly distasteful about this is how Wax seems to only go after non-whites. The first arm of Wax's search-and-destroy mission involves him cruising around killing every Asian person that crosses his path. When he runs out of Asians to kill, he turns his sights on the Middle Eastern folks. Wax briefly confronts a few black gangsters, but apparently they, like myself, had seen this movie before, so they bailed out of the picture before Wax could shoot them full of holes. 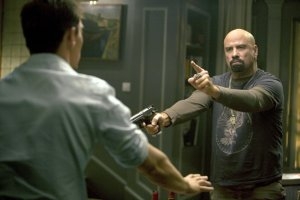 The film's attempts at humor aren't exactly stellar either. Travolta gets a few laughs out of his whole tough-guy routine, but most of the time his antics were about as easy on my ears as a cheese grater would be on the underside of my dick. There's also a Pulp Fiction reference gag in the picture that provoked one of the most audible groans that I ever audibly groaned in my entire history of watching movies. Furthermore, if you can't predict the "surprise" twist that leads viewers into the third act, then you're probably one of those idiots who couldn't figure out that the book Eli was carrying in The Book of Eli was a, well, y'know.

Don't get me wrong, I enjoy the occasional over-the-top action flick. I pop in Crank every once in a while to get my fix of explosive insanity. But there's fun over-the-top, and there's mediocre over-the-top. From Paris with Love feels like it's trying way too hard for a film that's only marginally better than bland.

MINORITY REPORT: If there's one thing I've learned from this movie, it's that looking like a bleached LL Cool J is a good look in France. I guess I'd better take that trip after all. -David "Data Core Devil" del Vacote III