While watching tv through the Xbox One, playback stutters during Dire Straits' "Money For Nothing" video. 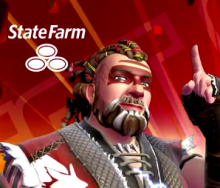 prominent State Farm ad logo in Kinect Sports Rivals (a first party full price retail game that you actually pay money for) is a 10 pixel by 10 pixel 1-color gif upscaled by 2500%. While it's on the screen, the console's hardware is so overtaxed that you can barely hear yourself flipping through your receipts to find the game store's return policy.

Every time you pull the trigger in Titanfall a confirmation dialog appears, asking if you really need the system to process more bullets, sound effects, physics calculations, and animation to enjoy the game.

In the time that it takes to load an average game level, a Microsoft employee can write an entire letter of congratulations to the competition for selling more hardware and post on a forum to assure everyone that everything is going according to plan.

Simulating a season in Madden takes three hours. The result is always "There were about 20 games and maybe some playoffs?"

When the Kinect thinks a lamp is a person, a message box pops up asking the lamp to stop moving so quickly so that the system can process its position. The simple task of displaying this message box brings the system to its knees for a full minute. After this, the Kinect reads the message box as another person.

In the Xbox One version of the newest Sonic game his fastest speed is a power walk.

Microsoft talked up the power of their cloud, claiming it would give developers infinite power and life without end. In practice, it hasn't made a difference in the performance of any games. Why is this? Clever hackers traced the Xbox One's internet requests to the address of the cloud, a single boost.txt file at Hotmail.com. The contents of this file: 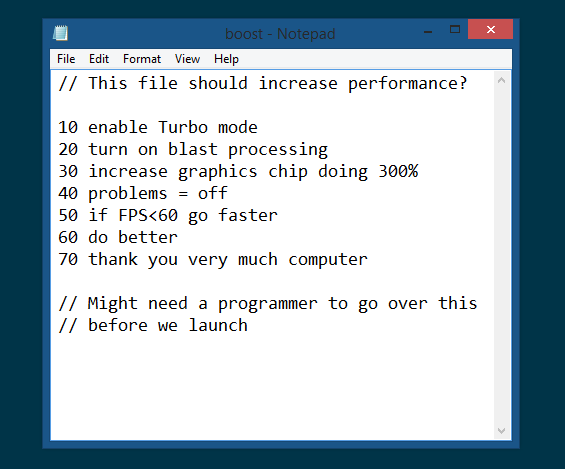 Indie game creators (those who stuck around after Microsoft threatened to exile them if they ever released a game on the PS4 first) are encouraged to use fewer polygons or maybe experiment with a really cool retro 4-bit sprite style.

The dashboard proudly displays a message informing users that the very limited launch day Xbox One Day One Edition is in stock at Amazon one hundred and fifty five days after the console's release. This is a clear sign that the operating system does not have enough horsepower to run a simple bad news filter.

The Xbox One can't render 3D crowds in racing games so everyone is an N64 wrestling game audience sprite, but that doesn't matter because you should be driving fast instead of looking at things. The Xbox One can't run most games at 1080p and occasionally has problems with 720p, but resolution doesn't matter because picture clarity is for nerds. To be fair, this means that the Xbox One is very powerful when it comes to insisting that nothing matters and the system's owners shouldn't care. Maybe too powerful.

The original name of the system was Xbox Three but the console's bootup sequence took three times as long since it had to calculate those extra digits.

Surprisingly, there is a seventh operating system. Taking a full one third of the Xbox One's power, this operating system is dedicated to a distributed computing project like SETI or Folding. The purpose of this massive project is to calculate the answer to one question: "Why?" There has been no answer. There will never be an answer.