EXPECTATIONS: Nicholas Sparks. Nicholas Sparks never changes. You want expectations? Okay. Here are my expectations: Two attractive white people will meet in a universe where there are no non-white people. Because of one or both of their tragic pasts/dark secrets, they will push each other away, then fall in love. There will be a rain storm. Something tragic will happen to one or both of them. I will yell "Bingo!" and walk to the concession stand to collect my $25 Applebee's gift card. 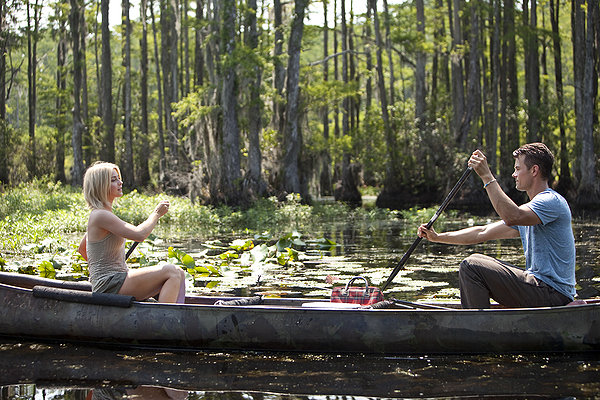 See if you can spot the pattern in the composition of all of the shots we'll be posting here. No clues though.

REALITY: Well, I was almost 100% correct. Safe Haven did surprise me, however, by turning out to be shockingly stupid, even by the incredibly low standards Sparks has set for himself. I'm not kidding when I say that Safe Haven is one of the dumbest films I've seen in a long, long time. Safe Haven Nicholas Sparks makes Dear John Nicholas Sparks look like Dave Eggers. It makes Whitney Cummings look like Tina Fey. It makes M. Night Shyamalan look like M. Night Shyamalan. 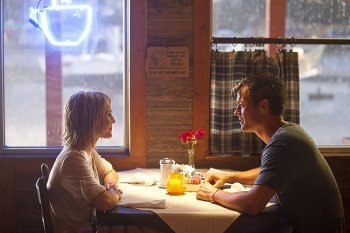 Any apparent visual motifs that jump out at you, just say.It's going to be difficult for me to recap the plot of Safe Haven. Not because it's particularly complicated, but because until the very end, the whole thing was just so dull I was actively forgetting the events as I was watching them. Information received by your neural system through your optic nerves goes through a series of steps while being understood, processed, stored - and then with time, removed - and my system was working at a rate I can only describe as superhuman. My brain couldn't wait to have these images removed from it, so it turned itself into a perpetual motion machine. There was a very Clockwork Orange-esque feel to the whole thing.


I think it was about a young woman named Katie (Julianne Hough, who was so good in Footloose, she deserves better than this) who settles in a coastal North Carolina town while on the run from her abusive husband. She finds a house and a job within twenty minutes of arriving, because she's a Nicholas Sparks character, and people automatically want to help her because she's a pretty blonde stranger, and they know there's a 30% chance she'll die of cancer or something by the end of the movie. She also starts visiting the store of local hunky widower Alex (Josh Duhamel, who pretty much deserves exactly this) and befriending his excruciatingly fake-cute and fake-bratty children. She also makes friends with her neighbor Jo, played by Cobie Smulders, and I just... oh god, it's all coming back to me how many stupid things happen in this film.

The story's main conflict comes from the fact that Katie's abusive husband Tierney (David Lyons) is a Boston police officer, and so she feels like she can't go to the cops... in North Carolina? Apparently in her mind, her husband is the king of all cops, when in fact he's not even that well-liked in his own department. People divorce and get restraining orders on cops just as they do everyone else. I suppose you could argue that Katie thinks this because of their history of abuse, but that just makes her character even weaker.


Anyway, Tierney puts out a nationwide APB on Katie, listing her as a suspect in a murder that never happened, which I'm pretty sure is not something street-level detectives can actually do, but whatever. Alex, who happens to have a cop for a best friend, sees the wanted poster and then, after a two-minute fight, welcomes Katie back into his house and around his young children despite the fact that, as far as he knows, she is wanted for murder. Meanwhile, back in Boston, Tierney has a breakthrough in the case of "where'd my wife go?" because he finds a cherry pie recipe proving that Katie knew her neighbors. There's conflict, things end the way you expect, then... okay, on the off chance you are reading this and want to keep the secret of Safe Haven special to discover for yourself, you should just skip to the scores, because I have to. I'm sorry, but I just have to. 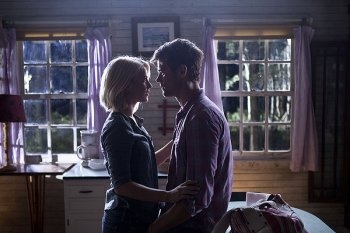 Anything at all that looks like a pattern, we're all baffled.Ready? Okay. *deep breath, exhales sharply* Cobie Smulders is actually the ghost of Josh Duhamel's dead wife. They reveal in the last five minutes that Katie's best friend - the one she's been walking around talking to in public, having arguments with and probably telling about the sex she and Alex have - is actually Alex's wife. I don't even really understand the motivations here. Is she checking to see that Katie is right for Alex? I don't know. What I do know is that this means that Sparks calls Cormac McCarthy "overwrought and melodramatic", but is now stealing ideas from Funky Winkerbean.


It was at this point that I began to twitch sporadically, as it occurred to me that not only did Sparks have to write that ending, look at it, and say "Yeah, I think this is good quality," but also a whole publishing company, movie studio and marketing squad had to agree with him. This is the kind of twist that people would make fun of in a fake movie on a sitcom. Maybe this whole thing is viral advertising for How I Met Your Mother, and Safe Haven is actually the film debut of Robin Sparkles!

I formed a lengthy list of complaints about Safe Haven in my head as I watched, but when we hit that point, they just seemed superfluous. Is there really any reason to point out that many of these scenes look like they were shot with the intent and budget of a promotional travel video? The truth is, I'm grateful for that twist, because it gives me something to write about. Otherwise, we've got a film that's actively too boring to review. However, I'm experiencing a feeling I never thought possible: I'm actually honestly looking forward to the next Nicholas Sparks adaptation. There's a part of me that needs to see what he can do to top this. I don't think we've reached Peak Stupid here, people. There is a stupid-rich reserve in this man's brain, and I say we mine that sucker for all that it's worth.

MINORITY REPORT: Ah, more romantic widowers. I don't get it. Did they do a poll or something about who were the most romantic figures in the world and widowers came out on top? Wouldn't it be so romantic if he could love again? Wouldn't it be just amazing if you were the girl who could unlock his grieving heart? If this keeps up, there'll be a whole string of lovestruck girls murdering dude's wives and making it look like an accident. - Ian "Professor Clumsy" Maddison