EXPECTATIONS: There was a brief moment in 2007 when the prospect of a Seth Gordon comedy was exciting. The King of Kong was a hilarious documentary with heart; a feature film with that mix of humor and pathos promised to be something special. Four Christmases was not that film. Neither was Horrible Bosses. I thought skipping town last week would protect me from Identity Thief duty, but the sad truth about terrible movies is that the popular ones tend to stick around.

REALITY: I'm at a complete and utter loss here. Seth Gordon and screenwriter Craig Mazin reached down to the bottom of the cavernous barrel that is long-form comedy and somehow dredged up Identity Thief as their final product. Forget the tired premise. Forget the outlandish characters. Hell, forget the crude humor while you're at it. Identity Thief forces us into a hellish road trip with the worst person on the planet, who spends the film's entire lousy duration trying to convince us how fucking adorable she is. This film is more than just Planes, Trains & Automobiles for assholes; it's cinematic Stockholm Syndrome. 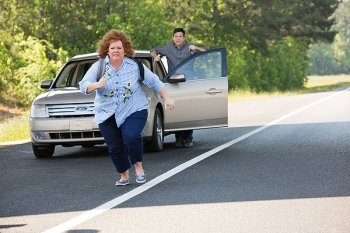 Hilariously, she tries to run fast but can't run fast. Brilliant.Sandy Patterson (Jason Bateman) has the perfect life: A family that loves him, a cushy middle-class job, and the promise of a promotion. One day, his credit card is declined, and then he's arrested for not making a court date halfway across the country. Sandy quickly discovers his identity has been stolen by a trailer-park clown named Diana (Melissa McCarthy). In order to clear his good name, Sandy travels to Florida to capture this woman and bring her back to Colorado for questioning. This task turns into a living nightmare, as Diana takes every opportunity to humiliate and injure him on their return trip. Meanwhile, the two are being hunted down by a hillbilly bounty hunter (Robert Patrick) and a gangster (T.I.) to whom Diana sold some phony credit cards. Grotesque, unfunny hijinks of the lowest order ensue.

Before I start in on just how utterly terrible this film is, allow me to White Knight it for a brief moment: Yes, Rex Reed is an asshole for making cracks about Melissa McCarthy's weight. Yes, half of the film's jokes revolve around her being less athletic than Jason Bateman. But the problem with this film isn't that she's fat: It's that she's quickly becoming typecast as the boorish comic relief just because pretending to poop in a sink in Bridesmaids got her an Oscar nomination. She is a better actress than this. Hell, she won an Emmy for her role on Mike & Molly, a show where she's the only one not playing boorish comic relief. It makes sense that she wants to strike while the iron is hot, but this material is beneath her.

For what it's worth, Melissa McCarthy isn't terrible in the film. She's saddled with some truly awful material to work with, but she throws herself into it completely. Diana is a vile human being, forcing Sandy into a series of increasingly horrendous lies, and McCarthy sells it almost too well. Jason Bateman tries his best as well, but God help him, his desperation is palpable. Sandy's contempt for his traveling buddy starts seeming like Bateman's contempt for the entire film. He looks tired; bored, even. Every director in Hollywood must have really loved him on Arrested Development, because when was the last time you saw him not playing a Michael Bluth-esque sadsack?

It's so whimsical how I stole your identity and all of your money and had criminal charges brought against you. I'm so kooky!


In fact, for roughly two-thirds of the film, Sandy's utter hatred for Diana seems believable and justified, regardless of what the film might tell you. As they drive down the road, she tries to coax some friendly conversation out of him, to which his response is simply, "I don't care. Shut up." And then he pulls the steering wheel to make her bonk her head on the window. Wow, what a heartless jerk this guy is, right? How could he possibly hate this colorful little ball of fun? The film starts trying to convince us that Sandy is the real monster for bringing Diana to justice. This is a woman who ran up his credit card, ruined his life and got him shot at by gangsters, but at least she's not an uptight stick in the mud like he is! The game this film plays is a lie. I hated Diana the moment I saw her, and two hours later I still hated her.

But then the film starts dropping in little moments to try and humanize Diana. She envies Sandy and the family he's trying to protect; as a child she was an unloved orphan; she may or may not have a personality disorder that causes her to rip people off. Then at least five different characters tell Sandy how great they think Diana is. You might see these as signs that Diana is a real human being with thoughts and feelings and a moral barometer that isn't entirely broken. You might also have forgotten how gleefully she defrauded Sandy and spent thousands of dollars his family didn't have at the start of the film. If you did, that's okay. Did you know that none of the information in the first act of a film has anything at all to do with what happens in the third act? It's true! I learned that from Identity Thief!

By the end of the film, the two have improbably become fast friends. Now let's recap this: She puts him in a situation in which he's forced to be in her presence at all times; she has basically kidnapped his life, and he has tethered himself to her for the sake of the plot. Through a series of horrible mishaps and fuck-ups (including a butt-crazy car salesman and a poisonous snakebite that leaves Sandy completely unharmed), she winds up endearing herself not only to him, but also to his entire family. That is not friendship. As I pointed out earlier, that is the textbook definition of Stockholm Syndrome. That's also the only explanation I have for the laughs this film earns. We laugh because we have to, or else the film might kill us.

MINORITY REPORT: New York Observer critic Rex Reed caught a lot of flack this week for making cracks about actress Melissa McCarthy's weight in his review, and justifiably so. What no one seems to be asking though, is "How much of a hacky, lousy critic do you have to be to look at a film like this, which just feeds you negative material like a baby, and somehow still have to resort to fat jokes?" - Martin R. "Vargo" Schneider