EXPECTATIONS: I often wonder at the variety of reading material in the average teenager's life these days. With Twilight, The Hunger Games and apparently Beautiful Creatures, there's a wealth of material out there telling kids that they're special and that they're going to find true love and make the world a better place. In my day we had Goosebumps, child-friendly horror that was almost eerie in its innocuity. Now, the monsters of horror have become romantic figures for kids to aspire toward becoming. If these whippersnappers ever saw the original The Mummy, they'd be left wondering why Boris Karloff doesn't get the girl in the end.


Horror, tragedy and romance have intermingled to forge the voice of an enlightened generation. Now, we have the first film adaptation of Beautiful Creatures, and it looks promising enough; like the kind of film the target audience wouldn't be disappointed by, at any rate, and also something that we few adult Twilight-likers might find uplifting enough. File this one under "cautious intrigue." 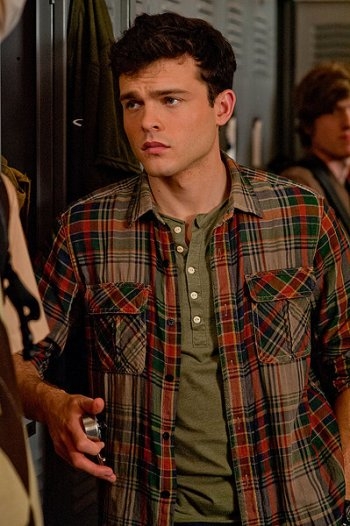 It's okay, he's not a vampire.

REALITY: Beautiful Creatures definitely breaks a lot of cardinal storytelling sins. Remember the old adage "show, don't tell?" Well, Beautiful Creatures spends more time telling than showing; it rushes through some inspired visual flourishes to get to its next lengthy dialogue scene. However, it's also a film loaded with wit and charm, and it has what I can only describe as a perfect ending.

High school student Ethan Wate (Alden Ehrenreich) is bored with his small-town Southern life and dreams of getting away and seeing the world. He also dreams of an unknown girl who he inexplicably loves. When he returns to school after summer break, he finds the girl of his dreams made flesh in the form of new student Lena Duchannes (Alice Englert). Determined to get close to Lena, Ethan soon finds that she lives with her reclusive uncle Macon Ravenwood (Jeremy Irons) and, more importantly, that she is in fact a witch who will be "claimed" on her sixteenth birthday by dark powers, lest her family curse be broken. When her long-dead mother arrives as a possessed Mrs. Lincoln (Emma Thompson), with her shady and hypnotic cousin Ridley (Emmy Rossum) in tow, the battle for Lena's soul will be hard fought and will require a great sacrifice.

So far, so beautiful and unique snowflakes. The film's greatest failing is in just how much time it invests in explaining itself. Everybody is constantly monologuing about what is going on, how they are related to each other, what just happened, what is about to happen, etc. Everything must be immediately explained. When Ethan tries to visit Lena unannounced, he finds that the path to her house is some kind of time-loop trap and he doubles back to find himself walking the other way. It's a great moment that is then negated by having it explained to you. It's a magic spell used to stop people from visiting unannounced, you see? Like you hadn't already figured that out.

The second half of the film gets especially bogged down in this when it should be rocketing toward a denouement. Instead, we get endless exposition about forbidden spells and light vs. dark and the moon and Civil War reenactments and flashbacks and secrets and signposts and snow and everything else under the sun. Very little of this resonates because it's just a constant stream of information. It's like you need to go on a crash course about this film while watching it, but it's really not as complicated as it thinks it is. Once you establish that these people have magic powers, surely anything goes. With a catch-all explanation like magic, you could just let cinematic language do the work for you with being so verbose. But someone didn't have enough faith in their audience or their material, and that's a damn shame.

We all enjoy a bit of ham.


Okay, so Ethan is the kind of super-intellectual, ultra-athletic and completely non-shallow high school student who only exists in the movies, and Lena is the kind of enticing outsider with black hair and pale skin who is so utterly intriguing to the bored young man who dreams of leaving his small-town life behind him. What differentiates this from Twilight is that it's weird outsider Lena who turns out to be special and magical, rather than the other way around. Of course, that's not much of a twist, and we've seen teenage witches before. What really makes it work is a smattering of sharp wit and humour. There's great banter between these two lovestruck youths and a very believable chemistry. They're a much warmer screen couple than Bella and Edward, and you genuinely root for them to be together.


Ethan could be a completely unbearable character if it weren't for Ehrenreich's sterling work. One of the ways the film conveys his utter precociousness is through his constant reading of banned literature. Beautiful Creatures takes place in a Southern town that is so trapped in the past that they still think they can win the Civil War. Books are banned, dancing is banned and the church rules the town. Sound familiar? Yep, this is Footloose with witchcraft. It's not as good as Footloose by a long shot, but it is thematically similar. What's different here is that everything is drawn in black-and-white terms, to the point of childish simplicity.


At first I thought this was an incredibly naive way to portray this world, but then the rather excellent ending comes along and reminds us that at some point we need to grow up, drop our black-and-white ideas of morality and realise that plans, dreams and intentions can change and it's not a bad thing to be mature about it. That's right, I don't want to spoil it too much, but in the final moments of Beautiful Creatures, it becomes a very effective statement on reaching adulthood. I really hope this film resonates with its target audience for that reason alone.

MINORITY REPORT: Having carried out several witch trials, I know there is only one logical and satisfying way that this film can end: with the horrific death-by-fire of a younginnocentevil woman. Don't disappoint me, Beautiful Creatures, whatever you are. - Montague "Legally Sane" Smythe