How to Train Your Dragon; Hot Tub Time Machine

The Good Kind of Dumb

EXPECTATIONS: I would normally go into a film named Hot Tub Time Machine expecting about nine different kinds of retarded, but after hearing good hype about this flick, I'm willing to approach it with an air of optimism. I don't normally explicitly state that I'm expecting good things because I fear doing so might jinx it for me, but after watching The Bounty Hunter last week, I'm not about to get picky. 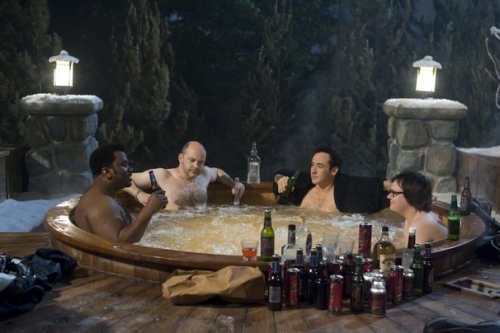 There's always one guy who wears his shirt in the hot tub. It's just your body, John. No homo!

REALITY: Just say the title to yourself: Hot Tub Time Machine. I mean, seriously, it's a movie where the main plot device involves a hot tub that also serves as a time machine. You don't have to be Lars Von Trier to know that's just plain silly. You've probably already seen it in the previews, but there's even a moment where Craig Robinson turns to the camera after saying the film's title, breaks the fourth wall and gives the audience a face that says "Writer's Guild strike movie." So yeah, Hot Tub Time Machine is loaded with bullshit. To its credit, fortunately, it's some of the funniest bullshit I've seen in a while.

Hot Tub Time Machine tells the story of four friends (well, three friends and one of the guys' nephews) who, after coming to the realization that their lives have become a wretched mess of disappointment, failed relationships and unpromising futures, decide to take a trip to a ski resort where the three of them partied their asses off during their younger years. Sadly, when they get there they discover that the resort has become a rundown rat hole and the wild parties they remember having there are the things of yesteryear. Trying to make the best of it, they spend the night partying in the resort's hot tub. The hot tub's mechanics go haywire, which not only sends them hurtling back to the year 1986, but also goes so far as to place them back into their younger bodies. (Yeah I know, just go with it.) 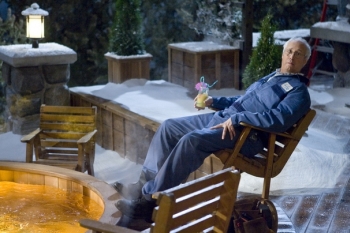 Hi! Remember me? Probably not.Obviously Hot Tub Time Machine is beyond ridiculous, and writer Josh Heald knows it. Hot Tub Time Machine aims to be as obscene, nasty and downright hilarious as possible and, much to my surprise, there's a bit of tact to how it approaches this mission. The film spends little time looming over the small details of the plot and more on the comedy. Remember, the title of the movie is Hot Tub Time Machine. If you really need to ask questions about the science behind that, then maybe you're better off staying home and watching Carl Sagan's Cosmos. This "just the facts, ma'am" philosophy to the storytelling gives the film more time to focus on crude humor and '80s gags and less on having to explain shit that wouldn't even matter in the end. Director Steve Pink films Hot Tub Time Machine with a similar idea in mind, giving us just enough exposition to keep the plot moving while taking a hands-off approach to the acting, giving his cast the breathing room they need to go crazy.

While on the subject, let me also add that the performances are great. Rob Corddry steals the show as the obnoxious Lou, the quintessential "asshole" in everyone's circle of friends. Craig Robinson and Clark Duke deliver laughs as Nick and Jacob, respectively. John Cusack doesn't have quite as much to do as Adam, the level-headed straight man of the group, but even he gets a few moments in the spotlight with a subplot involving him having to break up again with his old girlfriend so as not to mess up the future.

The film's cast of secondary characters is where a good portion of the strength lies. Chevy Chase pops in and out as a mysterious hot tub time machine repairman who appears at random intervals to offer the characters advice on how to get back home to 2010. Whenever they start getting too inquisitive about their predicament, he quite literally vanishes. Sebastian Stan is also great as a parody of virtually every single smug, pretty boy, popped-collar-wearing yuppie bad guy that has been in every single '80s movie ever made (he's even named "Blaine"), and props also go to Crispin Glover who plays Phil, the resort's bellhop, who you just know is going to get his arm torn off at some point.

The very world that Hot Tub Time Machine takes place in feels like a character as well. As soon as our characters land in the '80s, the movie wastes no time in pointing out all the horrifically outdated fashion, technology and cultural trademarks. All this mockery of leg warmers and Walkman cassette players might seem like the kind of thing that would get old quickly, and it does, but thankfully Hot Tub Time Machine stops with the routine before it really starts to wear on the audience's nerves, using the first few minutes of the film to get all the "retro" jokes out of its system.

From that point, the rest of the '80s gags are mostly visual. Some of the best jokes in the film involve just looking at things in the background, such as Duran Duran posters, the movie Red Dawn on TV or watching a guy play a keytar. Instead of having to hijack the film for a moment to point these things out, Hot Tub Time Machine lets them linger where we can see them so the characters can focus more of their time on simply being themselves. There are also a lot of subtle references to other time-travel comedies of the '80s, such as how Jacob, who had not been conceived yet, keeps fading in and out like Marty McFly in Back to the Future. And don't tell me that having a hot tub serve as a time machine is any more absurd than the phone booth they used in Bill and Ted's Excellent Adventure.

Lastly, and more importantly, Hot Tub Time Machine is funny. Remember those? Funny movies? Movies with nutty characters doing wacky things, getting involved in outlandish situations while making all sorts of well-timed jokes of both the visual and auditory variety? Maybe it's because I'm still stuck in the post-Oscar movie season slump, but I can't remember the last time I've laughed this hard in a theatre. Corddry, Robinson, Duke and Cusack are all very funny guys, and they show no mercy with the movie's incredibly raunchy variety of humor. There are a few jokes involving poo, urine, vomit and one that kind of involves ejaculate and then again kind of doesn't, but at least they're about as funny as jokes about all those nasty things could be. The real power comes from the actors, and from director Pink's willingness to let them explore their roles. I don't normally find myself taken with a film this silly, but Hot Tub Time Machine plays its cards right, and in the end it makes for a fun adult comedy.

MINORITY REPORT: If, by some chance of luck, I found myself in possession of the ability to travel backward through time at will, I would perhaps be inclined to burn down the establishment in which I wasted much of my youth. They called it a hospital, but I tell you; that was no place of healing! The screams in the night were unbearable, even though I was often the cause of them. I'm coming for you this time, Dr. Jannings! Just you try and commit suicide a second time; I'll be there before you can manage it and I'll make sure you suffer as I did. I've never met the man, of course, but I bet he was a cock! -Montague "Legally Sane" Smythe