EXPECTATIONS: If you had told me even five years ago that I would be more interested by Leonardo DiCaprio's involvement in a film than Clint Eastwood's, I might have thought you were crazy. Sure enough, though, Eastwood is directing Leo in this biopic on J. Edgar Hoover, and I'm more curious to see the performer work his magic than the director. These are strange times we're living in, indeed...

REALITY: J. Edgar Hoover was one of the most polarizing American figures of the 20th century. On the one hand, he built the Federal Bureau of Investigation into one of the strongest government agencies in the world; on the other hand, he did so at the expense of a lot of people's reputations and more than a few broken laws. Clint Eastwood's telling of the man's life is every bit as respectable, but at the same time every bit as egregiously miscalculated. 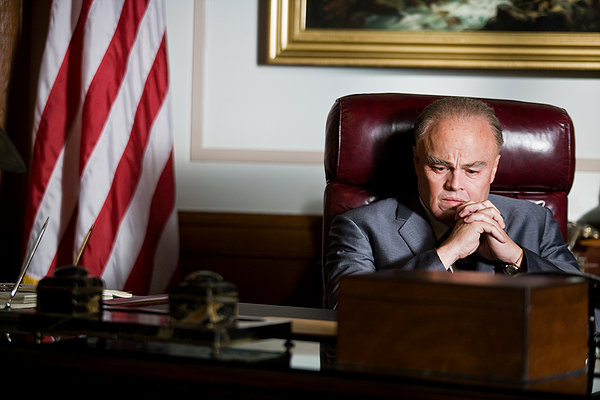 Oh deary me. More post-Wolfman makeup that falls below the standard.

J. Edgar is told through a series of flashbacks and flash-forwards as J. Edgar Hoover (DiCaprio) dictates his life story and that of the Bureau to a revolving door of typists. J. Edgar rises to power in the 1920s as a government agent tracking down Bolsheviks and other radicals. Soon after, he's appointed the director of the Bureau of Investigation and begins developing a criminal fingerprint database and forensics procedures that would become the standard for all law enforcement. Jedgar appoints a right-hand man in Clyde Tolson (Armie Hammer) and a personal secretary in Helen Gandy (Naomi Watts); investigates the Lindbergh kidnapping; brings down a number of gangsters and criminals; and lobbies Congress for ever-increasing power. 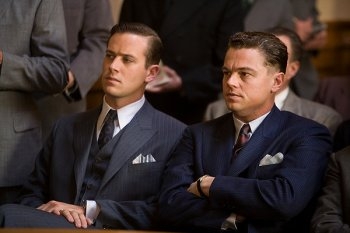 I knew Armie Hammer was destined for greatness. How else do you end up with a name like Armie Hammer?Perhaps the most interesting aspect of this film is that it's written almost entirely as the J. Edgar Hoover story as seen through the eyes of J. Edgar Hoover. As he dictates his memoirs to young, fresh-faced typists, it slowly becomes clear that telling his story is merely a way for him to stroke his own ego one last time. There is still much about the man that we'll probably never know, so Eastwood and screenwriter Dustin Lance Black (Milk) use this as an opportunity to speculate on a number of details; chief among these being the closeted relationship between Hoover and Tolson, and Hoover's relationship with his mother (Judi Dench).

The problem with J. Edgar, however, is that it ultimately amounts to very little. This is due in large part to the flashback-heavy narrative. For lack of a central unifying story, the film attempts to tell three or four of Hoover's most famous exploits simultaneously. Rather than letting each chapter of Hoover's life build on the one preceding it, we're left trying to make sense of the whole thing in piecemeal. The narrative thru-lines are so scattered and disjointed that it's almost as if Eastwood wanted us to play G-Man and piece things together for ourselves. While jumping back and forth through time between each little vignette, the only way to keep track of when we are in the story is by noting the amount of aging makeup on everyone's faces.


This is made even more difficult thanks to some hilariously shoddy makeup work. We're first introduced to Hoover as an old man; a lumpy, graying Charles Foster Kane type who looks more like a Saturday Night Live character than the head of the FBI. Then, almost immediately, we're thrust back to the 1920s, where Hoover is now a young, thin character resembling Leonardo DiCaprio. Eventually, we do become acclimated to the Seven Ages of DiCaprio, but it's almost laughable how jarring the effect is. Armie Hammer and Naomi Watts fare considerably better under the old-person makeup, though I dare say it should be a crime unto itself to force this many handsome people to wear such ghastly disguises. 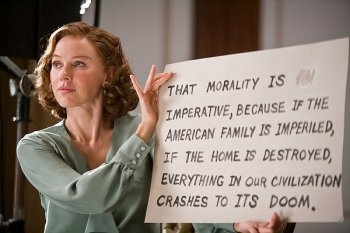 Nothing imperative shall ever be imperiled.On the performance front, the entire cast is top notch. DiCaprio has never been better, chewing his way through pages of dialogue at such a clip and timbre that you'd think he had been watching old newsreels of Hoover all his life. There's no question he's jockeying for an Oscar with this performance, and I'd say he almost deserves it after putting up with so much silly aging makeup. Hammer is great as well, in a far more understated performance. At one point Tolson suffers a stroke, so Hammer plays the character as even more subdued. It's such a convincing performance that it's easy to forget there's a 25-year-old man acting underneath the costume.

While there are scenes here and there that rank with some of Eastwood's best work, Jedgar is a disjointed hodge-podge of a film that is not helped by comically inept makeup effects and an unfocused thematic undercurrent. It's unclear whether Eastwood is banging the drum of "Those who forget history are doomed to repeat it," or if he's simply trying to tell us that this is the way it's always been and that government paranoia is nothing new. Had these folks taken more care in the scripting phase (or even the editing room), this point could have been much clearer. It's like building a house out of the finest wood and clay bricks in the land, and then insisting on holding the whole thing together with glue sticks.

MINORITY REPORTS: But does Leonardo DiCaprio wear a dress? That's what everyone cares about, right? - Martin R. "Vargo" Schneider

Does he wear a dress in this film? - Ian "Professor Clumsy" Maddison