EXPECTATIONS: Given the political climate, indie takes on the apocalypse are definitely "in." Take Shelter will be the third I've seen this week, after Another Earth and Melancholia. With the amount of praise being heaped upon Take Shelter (and my fondness for three of its principals), I fully expect it to exceed those in quality -- even though they were already good in their own right.

REALITY: In Take Shelter, director Jeff Nichols refuses to kick it up a notch at every turn, keeping the film firmly grounded as a drama instead of the psychological thriller it often threatens to become. This could have presented a problem for psychological-thriller fans like myself, if the drama weren't so very, very good. 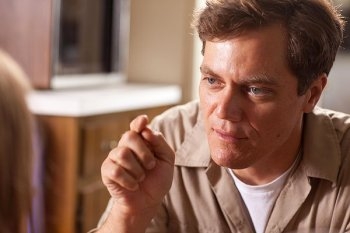 Fresh from his supporting turn in Machine Gun Preacher, Michael Shannon gets a chance to play the crazy religious lead for a change.Curtis (Michael Shannon), Samantha (Jessica Chastain) and their deaf daughter Hannah (Tova Stewart) lead the 21st century equivalent of a quiet life on the prairie somewhere outside of Columbus, Ohio. Curtis has a good job, pulverizing gravel into sand with the help of his best friend, Dewart (Shea Whigham), and he comes home every night to a quaint home with a backyard that opens to a tremendous view of the Ohio plains. When Curtis begins having dreams about the mother of all storms, he wonders if the visions are prophetic or if a family history of mental illness is finally coming down to roost.

Take Shelter opens with one of Curtis's dreams, in which birds fly wind-scrambled while motor oil falls from the sky. Throughout the film, the dreams escalate in weirdness while Curtis gradually alienates those closest to him as he gets to work renovating the tornado shelter in his backyard. And because Take Shelter ends on a somewhat ambiguous note, I'll reveal no more of the plot except this: People thought Noah was crazy too.

There's substantial value in Take Shelter's implicit criticisms of the films that preceded it. Several recent movies have depicted the husband whose seemingly irrational obsession alienates his wife until she throws a fucking fit and leaves. Take Shelter lets neither Curtis nor Samantha off that easy. Curtis knows he may be wrong about the storm, and Samantha quickly realizes she's invested in a marriage that's worth seeing through so long as he abides by some ground rules for the mentally ill: In order to indulge what may be a delusion, he must also indulge her desire for normalcy. This detail is so finely realized, it elevates the rest of the film. Instead of watching actors going through the motions, we're watching three-dimensional characters move toward a hypnotic, cathartic climax that would've been lost had she obeyed genre rules and walked the fuck out.

Ah, typical! I've got washing on the line.

Although Take Shelter aims primarily toward drama, it's not without tension. The dreams are unsettling, and the ways in which Curtis compromises his integrity to realize his storm shelter contribute to a sense of unease that compounds throughout the film. For two hours, we're forced to watch as he suffers major losses to follow a prophecy, Abraham-style.

If the film has a fault, it's that it occasionally drags during a somewhat repetitive second act, as we anticipate the losses Curtis will suffer, but maybe that's the point. If we know his fate in advance, doesn't that make it worse? And if, by the end, we can't tell definitively what the fuck just happened, doesn't that make us just like him? Far too many films tell us, rather than show us, what's happening to unstable characters, and far too few put us in their shoes. Take Shelter falls neatly in the latter camp, earning it a spot amongst the best films of the year.

MINORITY REPORT: So this is like Evan Almighty only ambiguous and, you know, good? - Ian "Professor Clumsy" Maddison