EXPECTATIONS: Try as I might, I simply cannot look at the poster for The Rover and not see Greg Kinnear instead of Guy Pearce. It's bizarre. Never in a million years would I ever actually mistake the two, but all of a sudden I can't help but imagine a post-apocalyptic road trip movie starring everyone's favorite Greg. (Imagine if someone decided to make a Fallout movie and then just turned it into Little Miss Sunshine.) Isn't it about time for Greg Kinnear to reinvent himself as a sci-fi leading man? Guy Pearce has been trying it for, like, a decade now. Give someone else a chance, Guy.

REALITY: This genre has been worked over and beaten to death so furiously at this point, that there was really nowhere for it to go but back to square one. The world has ended, resources are scarce and everyone is inexplicably stuck in the desert because shooting your movie in the city is a logistical nightmare. That's all the backdrop you really need for these films, and that's precisely where we find David Michod's The Rover. It's a maddeningly simplistic take on the end of the world filled with gorgeous scenery, intense performances, and a ten-page script that drags itself out for one hundred minutes of torturous silence.

Guy Pearce stars as Eric, a would-be Mad Max-type driving his car through the Australian outback ten years after an event known only to us as "The Collapse." As the film opens, Eric pulls into a dive bar for a quick drink. While he's inside, three criminals crash their truck next to Eric's car, and decide to steal it to continue their getaway. Eric really loves this car for some reason, and spends the entire rest of the film tracking these guys down in their own abandoned truck. Along the way, he rescues an idiot hillbilly named Rey (Robert Pattinson), who had helped the other three criminals pull off a heist. Rey had been shot and left for dead, but Eric rescues him and forces Rey to help him in the journey to recover Eric's stolen car. 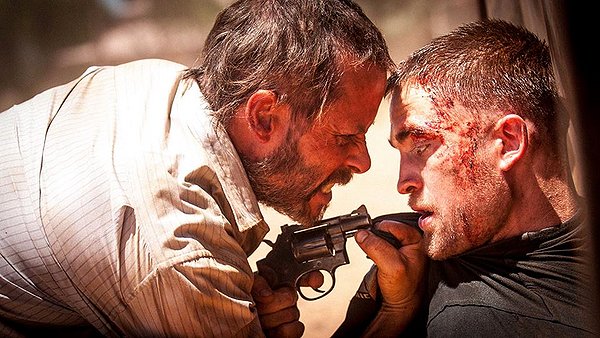 "That Prius is a sensible vehicle that will save the environment, you bastard!"

Truth be told, I probably could have summed up the plot by saying "Guy Pearce looks for his car and Robert Pattinson tries to help." That's all that really happens in this movie, if you want to look at it that literally. Going a step further, though, The Rover is a kind of deconstruction of the post-apocalyptic style. The things that we find so oddly thrilling about this genre -- the car chases, the dusty aesthetic, the often outrageous violence -- are played up to grisly effect. The film's one actual car chase, which definitely borrows a page or two from Mad Max, is abruptly anticlimactic, while Eric traverses this desert wasteland clad only in drawstring shorts and a pair of sneakers.

There is nothing thrilling about The Rover, not even our supposed hero. In all fairness, that's by design. Eric is not someone to root for. He's a haggard, crusty loner with a chip on his shoulder and probably a death wish. (Then again, aren't we all?) As the film rolls on, we begin to see that underneath that patchy beard is a man living with a great deal of pain. Eric is a man of few words, steadfastly refusing to tell anyone his name and constantly repeating his own questions until he gets the answer he wants. When he's arrested by military personnel, though, he opens up with the kind of sob story you might hear from Heath Ledger's Joker. It's hard to buy the story he spins about his life before The Collapse, but it's clear that his grief is very real. 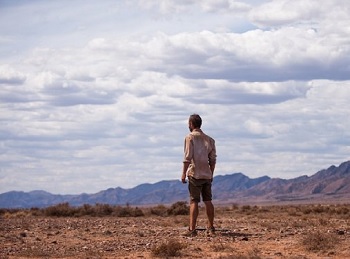 Then there's Rey. Rey is a hard character to figure out for a number of reasons. Chief among them: He's apparently an American, and R-Pattz gives him such a heavy southern drawl that it's nearly impossible to understand anything he says. On top of that, Pattinson plays him like a tweaker in a heavy state of withdrawal. And being such a dim bulb in an utterly bleak situation would almost make him a tragic figure if he weren't written like such a useless waste of skin. How he and his brother (Scoot McNairy) made it to the Australian outback in the first place is a baffling mystery all on its own.

But while these two very distinct characters are the centerpiece of Michod's picture, nothing about their tentative partnership spells "buddy movie." In fact, The Rover often goes out of its way to not conjure up fun, humor, or anything else in which viewers might take pleasure. This film is as single-minded as its protagonist, and it refuses to waver in its mission of presenting life after 'collapse' as anything but a kill-or-be-killed waking nightmare.

I'm tempted to compare the style of The Rover to that of Under the Skin, though that's probably giving this film far too much credit. It has sparse dialogue, hauntingly gorgeous cinematography, and a story that forces viewers to fill in the gaps for themselves. The only difference, though, is that while Under the Skin uses its sci-fi trappings to make some very acute observations about gender dynamics, The Rover's goals aren't nearly as ambitious. "Post-apocalyptic scenarios probably won't be as fun as you think," the film keeps trying to say. This mind-numbingly obvious pill would be easier to swallow if the whole thing didn't build to a punchline about Guy Pearce's fucking car.

MINORITY REPORT: I really don't know why people insist on making post-apocalyptic movies after Doomsday. Hmmm, I could watch Guy Pearce look for his car, or I could watch an army of psychos slice off and devour human flesh while dancing to a Fine Young Cannibals tune. Not exactly a difficult choice. - Sean "Keanu Grieves" Hanson