Slow and Steady Wins the Race

EXPECTATIONS: I didn't expect The American to draw a particularly young crowd, but I was still surprised to find myself in a theater filled to capacity with old people. This is the second-worst crowd you can have for a movie, placing right after Twilight fans but before delusional schizophrenics. There are people snoring, oxygen machines clicking, people answering cell phones, people trying to answer cell phones but not knowing how. These are people who were shocked every time a gun appeared on-screen, despite having bought tickets to watch a movie about a hitman. They had trouble comprehending what's happening on the 80-foot screen in front of them, and so they must ask their companions and have a dialogue after every scene. Then they leave the theater complaining about how they didn't understand it, and blaming it on the "trash in movies these days." What does this have to do with my expectations for the film, you ask? Simple: When going to see a movie about an assassin, I did not expect to feel any desire to become a mass-murderer myself, but life is full of surprises.

REALITY: Before we begin, I'd like to encourage you, if you have not already done so, to go to YouTube and watch the trailer for The American. It's okay, I'll wait.

You're back! Did you watch it? Did you like it? Well, guess what? This is not that movie.

The American tells the story of a hitman named Jack (George Clooney) who is fleeing attempts on his own life that lead him to lay low in the countryside of Rome because ... the director wanted to go to Rome. There he takes a job building a gun for another assassin, Mathilde (Thekla Rueten); takes advice from a priest (Paolo Bonacelli); and begins a relationship with a prostitute named Clara (Violante Placido). And that's about it. Really, that's the whole movie. Jack's still on the run from the people that are trying to kill him, but that just gets dealt with every couple of scenes and then is dropped like an afterthought until the very end. This is not an action movie, so don't bring the bros for fraternity movie night. (Unless you want to see tits. There are tits.)

If anything, this film is a character study, and one that goes a long way toward proving that anyone who accuses Clooney of "playing himself in every movie" is an idiot who should shut up forever. What we are watching is the story of a man who is past the point of caring about anything. He is beyond taking pleasure, and sees everything as work due to his tendency to get people killed by having relationships with them. The first time we see Clara naked, which is also the first time we see Clara at all, Jack is looking at her with the same emotion and sitting in the same position as he was shown sitting at a table looking at parts of a gun. It takes a special kind of actor to make being emotionless seem compelling. 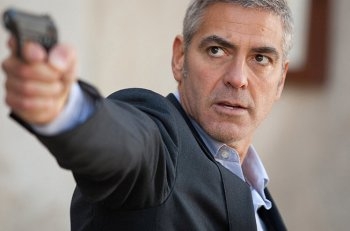 White hair was the best thing to ever happen to Clooney. Look how handsome and mysterious he looks.The American is one of the most meticulous films I've seen all year. It's slowly paced, sure, but it's not padded, it's incredibly deliberate. It's almost as if director Anton Corbijn looked at his own IMDB page, which mostly consists of U2 and Metallica videos, and decided to go as far from that as possible. In fact, it almost makes sense that Corbijn's experience comes primarily from music videos, because each scene in the film is almost a story unto itself, and the underlying story arc gets lost while you become interested in what is happening right now. I can hardly blame Jack for forgetting that some Swedish guy wants to kill him; I certainly did. By the end, the film seems less like a complete story, and more like a series of vignettes in the life of The Man Who Never Smiles. In a lesser film, this would be a complaint, but The American is good enough that it works. The film is disjointed, but all the parts are enjoyable enough on their own.

Despite his obvious talent and potential, Corbijn makes a few questionable choices. For example, many of the scenes have a strong build-up, with Herbert Grönemeyer's brilliant original score perfectly punctuating the action on screen. Several times the audience will become engrossed in the tension of the moment, only to be let down with little to no payoff, leaving a lingering case of theatrical blue-balls. It's similar to most horror movies, where the first scare is always fake, it's always a cat or the hero's friend, except four or five scenes in a row are that way. Then when a scene finally does have the expected result, the audience is less surprised and interested, and more grateful that something finally worked like we wanted it to.

Another bizarre point in the film is the use of butterflies as a motif. Jack has a butterfly tattoo on his back and is repeatedly referred to as Mr. Butterfly by every woman he meets. (If 'Mr Butterfly' were anyone but George Clooney, he would never get laid, ever.) There's an eye-rolling moment where a butterfly lands on Mathilde's dress and an awkward discussion comes about regarding the insect being beautiful and endangered. The butterfly and an occasional caterpillar practically become recurring characters, just blatant enough to get under the skin of everyone who gets it, and just subtle enough to fly over the heads of everyone who thought they were watching The Bourne Identity starring Danny Ocean. This may work fine as Bono waxes poetic about beautiful days and political prisoners, but in this film it seems out of place. 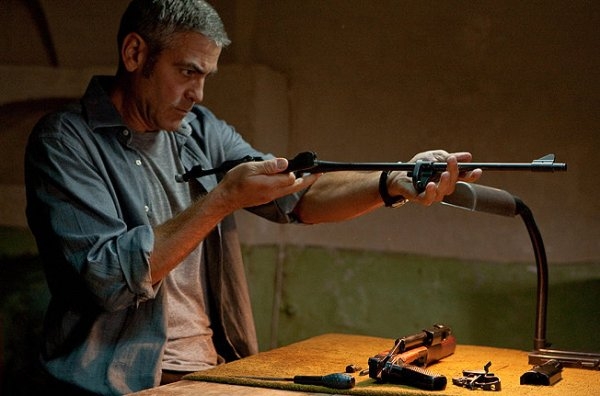 This month's issue of "Collect a Gun Monthly" has finally arrived. George doesn't even read the magazine anymore, he just waits for December so he can finally finish putting this thing together.

In fact, this movie seems out of place in my theater. I can't quite tell you who this movie is made for, and neither can it. At one point, Jack is in a diner watching Once Upon a Time in the West, and the deli owner awkwardly states out of nowhere that Sergio Leone was Italian. Obviously this is Corbijn pointing out that he was heavily influenced by Leone (kind of a douchey thing to do anyway), but it begs the question of "Why even do that?" Anyone who cares about that is going to know already, and anyone who doesn't won't get it, so why bother making that reference?